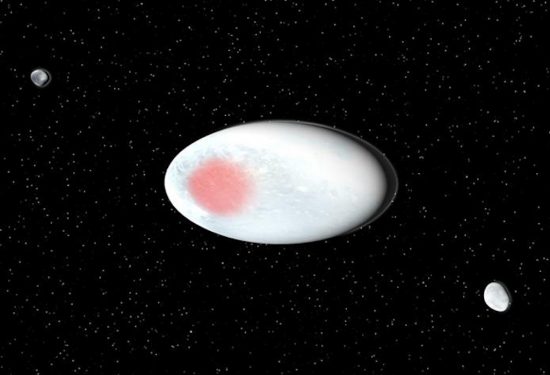 Eris is located 1.4 billion kilometers from the Sun and is about 5% larger than Pluto. Eris is accompanied by a moon called Dysnomia. Quaoar is approximately 6 billion kilometers away in the region of the Kuiper Belt just beyond Pluto. Quaoar is the third largest KBO discovered so far, about half the size of Pluto. The fourth largest KBO is Varuna, 40% as large as Pluto. Haumea is about the same size as Pluto, but only has 1/3 of the mass. It is also egg-shaped and has two moons, Hi’iaka, and Namaka. It is thought that Haumea smashed into another rock, giving it its shape, rotation and moons.

Immanuel Kant’s “Nebular Hypothesis” is how astronomers believe the Solar System came into existence. Kant suggested that a nebular cloud collapsed due to gravitational forces that drew the cloud particles together. As the clumps grew, they became more attractive, finally accumulating into a dense, rotating mass. Gravity is then compressed the mass into a hot ball, rotating with the cloud’s original angular momentum. The ball gathered more and more matter until nuclear fusion reactions gave birth to the radiating structure we call the Sun, along with what astronomers call an “accretion disk”, extending beyond the current orbit of Neptune.

Eddies of matter formed in the ring of dust and gas, growing ever larger, slowly drawing in more particles, until hundreds of millions of impacts gradually formed the planets. The Kuiper Belt is thought to a location for the remaining material that did not condense into planets.

There is an anomaly in the arrangement of the KBOs, however. Sedna was discovered in an orbit that is much farther out than the grouping that includes Eris, Quaoar and Varuna. Sedna is large, about as big as Pluto, but it is nearly 10 trillion kilometers from the Sun, making it too far away to technically be considered a Kuiper Belt Object. The KBO theory has yet to accommodate Sedna.

An interesting characteristic of the various dwarf planets is that they are “colorful”. Haumea is reddish in color, while Pluto is brownish-yellow and Eris is green. Where the color component came from is a mystery to planetary scientists. Indeed, why the gas giant planets reveal separate colors, with different chemical compositions, is also a difficult question for astrophysicists.

In a plasma cosmogony hypothesis, however, stars form when Birkeland current filaments twist around one another, creating z-pinch regions that compress plasmas into a solid. Such “pinched” regions are where star formation occurs. When stars are born they are under extreme electrical stress. In that case, they will split into two or more daughter stars, thereby equalizing their electrical potential.

“The fission process is repeated in further electrical disturbances by flaring red dwarfs and gas giant planets ejecting rocky and icy planets, moons, comets, asteroids and meteorites. Planetary systems may also be acquired over time by electrical capture of independent interstellar bodies such as dim brown dwarf stars. That seems the best explanation for our ‘fruit salad’ of a solar system.”