Home Picture of the Day Deep in the Dark

Deep in the Dark 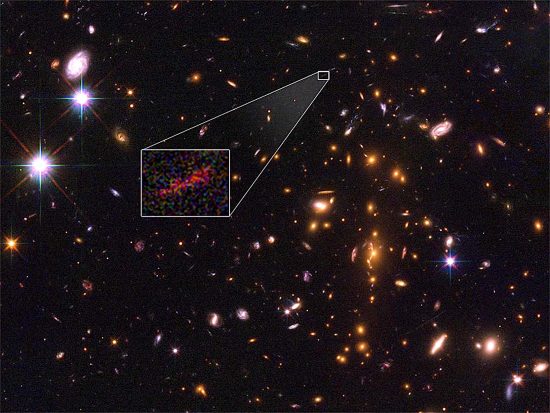 The Universe keeps getting bigger.

A recent press release announced that astronomers, combining data from the Hubble Space Telescope and the Spitzer Space Telescope, found a galaxy they believe is 13.3 billion light-years from Earth, making it the most distant object ever detected.

According to the report, redshifted light from the “baby galaxy” means that it was born when the Universe was only 500 million years old. The problems with redshift as a distance measuring tool are addressed many times in previous Pictures of the Day. Adapting the Austrian physicist Christian Doppler’s observations to the spectra of various galaxies, astronomer Edwin Hubble thought that the change in location of particular elemental signatures called Fraunhofer lines (for the German physicist Joseph von Fraunhofer), indicated that light was shifted toward the red end of the spectrum by a recessional velocity.

Redshift is used to calculate all galactic-scale distances. In that system, some galaxies are thought to be moving away from Earth at 90 percent of light-speed. Since distances and recessional velocities correlate with a time-scale, conventional astronomers believe that a galaxy 10 billion light-years away is also 10 billion years old: they think they see ancient light that traveled through space for 10 billion years.

Astronomer Halton Arp speculated that redshift measurement is composed not of a velocity value alone, but also on what he called “intrinsic redshift.” Intrinsic redshift is a property of matter, like mass or charge, and can change over time. According to his theory, when quasars are ejected from a parent galaxy they possess a high intrinsic redshift, z = 2 or greater.

As quasars move away from their origins within galactic nuclei, their redshift properties begin to decrease until they reach somewhere near z = 0.3. At that point, quasars resemble galaxies, albeit small ones. The inertial moment of ejection is eventually overcome and quasar masses increase, while the speed of ejection decreases, until they become companion galaxies.

There is nothing conclusive in mainstream scientific journals about Arp’s data. His revelations concerning problems with consensus dogma were considered intolerable, so he was summarily censured by his peers. However, the evidence he gathered and promoted ought to prompt the consensus community to ask questions about galactic births and deaths. How big and how old is the Universe if redshift readings are not reliable indicators of distance?