Home Picture of the Day Feeling the Heat 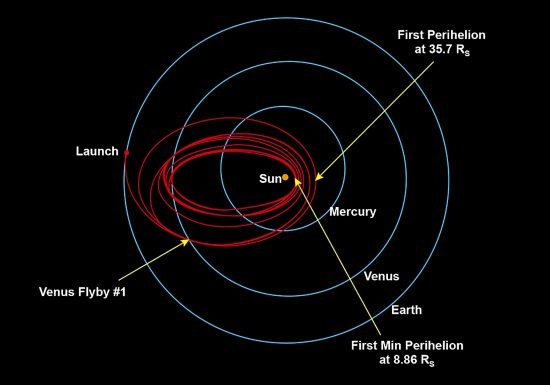 The Parker Solar Probe was launched on August 12, 2018. Its first gravity assisted slow-down took place on October 3, 2018. The probe will conduct several more gravity-assist maneuvers with Venus over the course of the next seven years, gradually bringing itself to a minimum distance of 5.9 million kilometers to the Sun by 2025.

Conventional heliophysicists think that the Sun operates like an electric dynamo. Stretching of magnetic fields due to the Sun’s change in rotation rate, caused by differences in latitude, is thought to provide the torque needed for electricity generation. Twisting of those magnetic fields is also thought to contribute. In the first instance, it is known as “the omega effect”. In the latter, it is called “the alpha effect”.

As written many times, stars are like giant spheres of slow-motion lightning. It is this simple hypothesis that best matches observational evidence. Fusion occurs in the surface regions of the Sun and not “deep in its core.” Electricity flowing through solar plasma initiates the Sun’s dynamic electromagnetic field, so no convective regions, transition zones, or alpha and omega effects are required.

In the consensus view, the Sun is thought to be a swirling cauldron of fluid dynamic interactions in “hot gas”. Plasmas (mostly hydrogen and helium), and the way they behave, are not seen in electrical terms. Instead, it is intense gravity that energizes the Sun. Magnetic fields on the visible surface and gigantic plasma currents bubbling up from the star’s interior are responsible for variations in the Sun’s output. Granular phenomena on the Sun are thought to be driven by fluid dynamics, since the Sun is “hot gas”.

Granulation, in their view, is due to hot plasmas from within the Sun, except that the plasmas act like “a boiling teapot” in their models. The plasma is “roiling”, or rising and falling, so that is what they believe forms the granular chromospheric phenomenon.

As written in other Pictures of the Day, the Sun is a positively charged electrode in a circuit that is connected to a negatively charged electrode far beyond the planetary orbits. The electric model sees all solar activity resulting from fluctuations in electric power coming from the Milky Way. Ubiquitous, low density Birkeland current filaments move through the Solar System, supplying more or less power to the solar electric circuit in the form of an electron drift toward the Sun.

A principle of Electronic Sun theory is the aforementioned “granulation”. Except, in the electrical proposal, it is where dense anode tufting is seen. Since the chromosphere can be compared to a discharge tube’s positive electric terminal, events similar to those seen in a neon lamp will be observed, such as a hotter and brighter area just above the electrode’s surface.

That glow corresponds to the chromosphere, just above the Sun’s photosphere, which can be thought of as the anode surface. When electric charge density exceeds the containment ability of the anode surface, a secondary plasma forms. That is the aforementioned anode tufting. The characteristic pattern of granulation on the Sun forms because tufts are packed together so tightly.

The Sun is connected to the galaxy by Birkeland currents, so its “chaotic” characteristics are due to fluctuations in electricity arriving from the Milky Way. The Sun is an electric arc and not a ball of hot gas. The Sun’s energy is focused from outside and not expelled from inside. The Sun’s electric field is its ordering factor, and variations in that electric field make it a variable star. It is not just magnetic fields that move solar plasmas, it is electromagnetic fields. Since it is impossible for consensus heliophysicists to accept the theory of an externally powered Sun, puzzles can only proliferate.