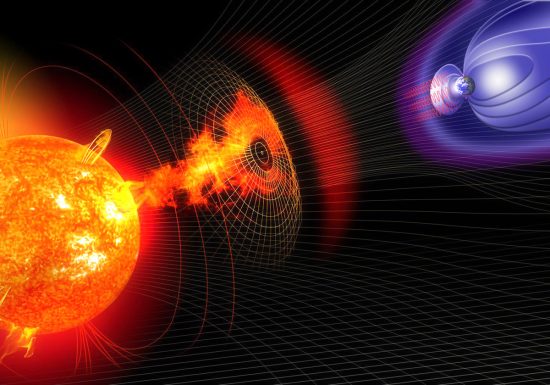 The Sun supplies enormous quantities of electric charge to the Solar System.

As written many times over the years, sunspots, flares, coronal heating, and coronal mass ejections are due to changes in the Sun’s galactic electrical supply. Retired Professor of Electrical Engineering, Dr. Donald Scott’s Electronic Sun theory proposes that the Sun is powered externally, rather than through internal fusion reactions. As Dr. Scott illustrates in his presentations, Birkeland current filaments carry electricity through the Milky Way, supplying the Sun with variable power.

Birkeland currents are part of an electrical circuit than links the Sun with the Milky Way, since electricity must always travel in a closed loop…there can be no “open-ended” electromagnetic fields. Therefore, any theories that say electromagnetic fields can break or disconnect from the circuit must be incorrect. Electricity manifests itself in many ways, but most importantly through conditions in ionized plasmas.

Plasma’s behavior is driven by conditions in those galactic circuits. Fluctuations in charge flow form double layers with enormous voltages between them. A previous Picture of the Day described the potential power that can be released when those double layers short-out. That means electric forces in double layers can be several orders of magnitude stronger than gravity. Double layers separate plasma into cells that can have different temperatures or densities.

Irving Langmuir coined the term “plasma” in the 1920s. He and his colleagues found that electron transport through plasmas reminded them of how blood plasma carries red blood cells throughout the body. Electrical plasma behaves in ways that simulate living systems.

Langmuir described the plasma he observed as follows:

“Except near the electrodes, where there are sheaths containing very few electrons, the ionised gas contains ions and electrons in about equal numbers so that the resultant space charge is very small. We shall use the name plasma to describe this region containing balanced charges of ions and electrons.”

Since the Sun is connected with the galaxy, and incoming electricity provides it with motive power, the Sun can no longer be viewed as an isolated object, divorced from any external influence. In an Electric Universe, plasma discharge behavior is the best model for solar activity. Experiments with an electrically energized sphere create plasma discharges between the sphere’s middle and lower latitudes. Those discharges are called “spicules”, and are also known as “anode tufts”, a laboratory plasma effect expected from a positively charged Sun.

Another way in which conventional thinking differs from Electric Universe proposals is that most heliophysicists see the Sun as a giant amplifier, accelerating solar plasmas into space with sound waves traveling through “acoustical wave-guides”. However, it is spicules, rising thousands of kilometers above the photosphere, that carry ionized plasma with them.

Since the Sun is the locus of positive charge with respect to interstellar plasma, sunspots appear when electric discharges penetrate the photosphere, allowing electric charge to flow into its depths. Electromagnetic flux tubes (sunspot filaments) expose the Sun’s cooler interior. The idea of kinetic heat transfer from the Sun’s core cannot be supported by any observations.

Multiple loops and arches rise up from the photosphere, penetrating the chromosphere. The chromosphere is a plasma sheath, or double layer region of the Sun, where most of its electrical energy is contained. When electric charge flowing into the Sun’s plasma sheath increases beyond a critical threshold it triggers sudden solar flares.

Powerful electric fields generate secondary toroidal magnetic fields that surround the eruptions. When current grows too strong, the plasma double layer is destroyed, interrupting the charge flow, and allowing stored electromagnetic energy to blast into space. Solar flares, therefore, can be thought of as solar lightning bursts, discharging vast quantities of matter at near relativistic speeds.