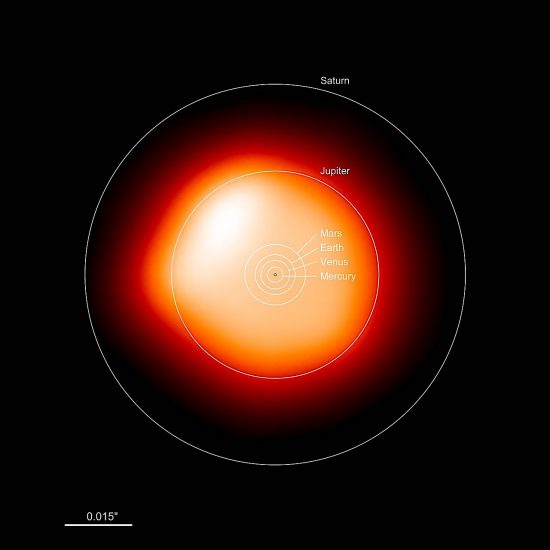 The red giant star, Betelgeuse is among the largest stars. As the image above illustrates, if it occupied the Sun’s position, it would exceed Jupiter’s mean orbital diameter. Although it is large, its substance is so diffuse that the orbits of the inner planets might not be affected.

Betelgeuse is located in the constellation Orion, which also includes the Orion Molecular Cloud Complex and another giant star, Rigel, a blue-white star about 40,000 times brighter than the Sun. Both stars are considered youthful by consensus astronomers, but Betelgeuse is thought to be nearing the end of its life because its radiative output is about 100,000 times greater than the Sun.

Sunspots were discovered on the surface of Betelgeuse, but only two of them are seen covering one-third of its surface. Astronomers think that they indicate heat transfer from its interior similar to “a pot of boiling water”. They believe that idea because they observe “bubbles of hot gas” as large as the star itself. Betelgeuse ejects massive amounts of stellar material, so it is suggested that it experiences vertical oscillations beneath its surface that cause “hot gas” to erupt into space, like bubbles in boiling water emit steam.

That theory is another in a long list of theories that rely on kinetic effects to explain stellar behavior. The Electric Star theory proposes a different explanation that relies on the electrical connection that stars have with their galactic neighborhood. Stars shine because electricity flows through space: stars can be thought of as giant spheres of electrified plasma, an idea that best matches observational evidence.

Retired Professor of Electrical Engineering, Dr. Donald Scott, suggests that a star’s size, luminosity, and color have little or nothing to do with how old it is. As Dr. Scott wrote, a star’s behavior is based on the electric charge flux at its surface. Stars are not powered by internal thermonuclear fusion.

Since red giant stars like Betelgeuse are relatively cool but extremely bright, they are interpreted to be large. However, the Electric Star theory proposes that they possess broad coronae. Betelgeuse might be small inside its extended, energetic atmosphere. Since its temperature measurement is only about 2900 Celsius, the thermonuclear model of stars is open to question. Why does such a cool temperature create such an extreme radiative output?

Electric Universe advocate Wal Thornhill agrees with Dr, Scott, proposing an electric model for Betelgeuse and red supergiant stars, in general. Electric charge flow in space is primarily due to the movement of electrons through interstellar plasma, meaning stars lack electrons due to charge separation. Stars are “positive anodes in a galactic glow discharge”.

Red supergiant stars expand in order to collect electrons with a large plasma sheath. As they expand, their electric fields get stronger. Electrons are accelerated to high energies, high enough that neutral particles begin to glow from collisions with negative ions, resulting in a “red anode glow”.

Betelgeuse is an electric star, so its bright regions are areas where electric charge is flowing with the greatest amperage.