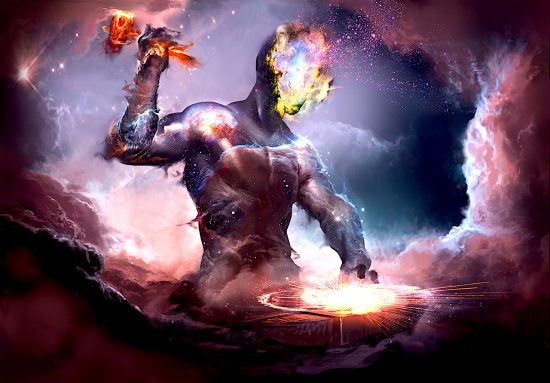 Have you ever seen a carpenter try to cut a 2×4 with a hammer?

Probably not. Carpenters usually carry a saw as well as a hammer in their toolboxes, and they know to use the proper tool for the task at hand. If they didn’t have a saw, they likely could flail away with the hammer and eventually produce a splintered length of wood that more or less fit their need. But it wouldn’t be pretty.

Astrophysicists have only one tool in their kit–the hammer of gravitational theory. When called upon to build an explanation for the phenomena of a universe filled with plasma, they can’t cut it. They’re forced to flail.

An oscillation in a plasma discharge that produces a thousand pulses of electromagnetic radiation per second–a pulsar–will be splintered into ad hoc kindling by the hammer of gravity. Several stars’ worth of matter must be pounded into a tiny volume and spun around at a thousand r.p.s. Then a hot spot must be tacked on to produce the pulses of radiation.

The self-constraining filaments of plasma spiraling out from the poles of active galaxies–galactic jets–require even more gravitational hammering. An astronomical quantity of matter must be pounded into such a tiny volume that it loses most of its recognizable properties and becomes a black hole. The black hole then pulls in all the surrounding matter and squeezes it. Next, gravity has to poke tiny holes in the squeezed matter to squirt it back out. Finally, emergency aid from magnetic forces has to be called in to keep the streams of hot gas from evaporating into the empty space around them.

The spiraling filaments of a plasma “rope” can pinch down into a small “hot spot”. If the current density is high enough, the pinch and the tubular or conical volume around it can glow, revealing the filamentary structure in visible light. To explain these planetary nebulae with gravity, a catastrophic imbalance between radiation and gravitational pressures must be generated in the core of a star. The resulting explosion blows off a spherical shell of hot gas. That shell must then be molded into the observed bipolar shapes (the tubes and the cones) by way of asymmetric interactions with previous gaseous emissions and interstellar gas. Sometimes a little help from (currentless) magnetic fields is thrown in. (As far as is known, with the possible exception of bar magnets, an electric current is the only way to produce a magnetic field. But “electric current” is an alias for a plasma.)

These examples of gravitational flailing illustrate a fundamental incommensurability in viewpoint. A carpenter chooses a saw or a hammer according to whether he’s working with wood or with steel. Identifying the material at hand is one of those cognitive activities that’s so basic it’s taken for granted. It’s often unconscious. It surprises us when it’s forced into our awareness by being mistaken, when what we assumed was a nail turns out to be a splinter of wood.

In the case of the universe, this fundamental identification is whether it’s composed of masses or of plasmas. A carpenter has many sources of information about his materials–sight, touch, smell, and a history of experience. Physicists are severely limited: They have only the readings of a few instruments exposed to a thin stream of photons from the sky.

This vacuum of sensory deprivation tends to suck in material from the nearest source of cognitive substance, which is preconceived ideas. To a man with a hammer, everything looks like a nail. And to a physicist with a theory of gravity, everything looks like mass. When the mass he imputes to the source of the thin stream of photons doesn’t nail down the explanation he needs, he imagines more mass, invisible mass, mass compressed into black holes and expanded into dark halos, until his universe is 90% imaginary.

A physicist with a theory of plasma is much better off. At least she can perform laboratory experiments on her alternatives to black holes and dark matter. She has more sources of information about her material than the thin stream of photons from the sky. She can test the ideas she imagines with the sparks she can manipulate. She can hammer on the wood; she can saw on the nail; she can see that doesn’t work and go back to try the reverse. She can be scientific, can use concepts as tools, and can avoid transubstantiating them into pseudo-religious icons.