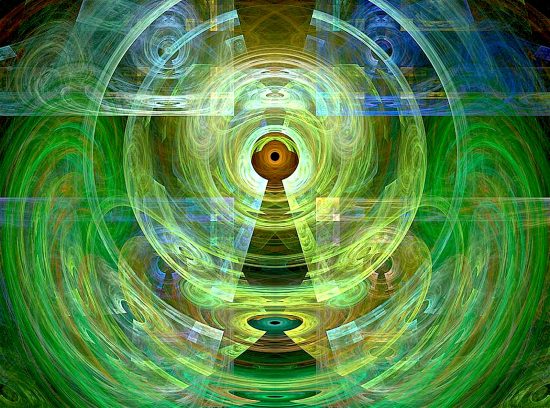 We peer at the universe through keyholes.

We sense half a dozen colors, variations of rough and smooth, flavors that are sometimes familiar, a few octaves of pressure oscillations in air. What are we missing? The colors of microwaves and x-rays, the sounds of electric currents, the smells of magnetic fields, the sensations for which we have no names or even imagination.

All we get from these keyholes are cascades of tiny sparks between nerve cells. We arrange these sparks into patterns, which we call perceptions and conceptions and facts. We give them names, and the names relate one with another, and these relationships imply points of view. The name we give to the viewpoint that’s peering through the keyhole, to the metaphorical eye that sees what there is to see, is the I of ego who understands that it sees.

When this eye looks back on itself, when the I understands that it understands, it becomes conscious. This consciousness has an inherent bias. Because we’re not conscious of what’s unconscious, we assume what’s conscious is all there is. Consciousness is like a spotlight in a dark room: Because all we see is what’s within the circle of illumination–the wallpaper, the picture, a chair and its shadow–we think that’s all there is to see.

We can overcome this bias if we pay attention not to the objects illuminated but to our activity of seeing them. Memory helps: The circle of illumination moves; we see other objects; we remember what we no longer see. Libraries help: We can discover what others have seen. This prompts us to realize there’s more to the universe than we’ve seen, experienced, understood.

But it’s not just the circle of illumination that can move. The source also can move. The spotlight can shine on the same objects from different locations. The nervous sparks from which we form the patterns that imply a viewpoint can be rearranged to form a different pattern, and the different pattern will imply a different viewpoint. We call this learning. It prompts us to realize there can be more than one way to see things, there can be more than one theory to explain things.

From a different viewpoint, familiar objects–“the facts”–look different: We see the wallpaper, the picture, and two chairs.Curiosity goads us to invent ways of generating additional sparks that might allow us to judge whether the pattern of one chair and its shadow or the pattern of two chairs is the “real” one. We call this experimentation, verification, and speculation. Again, if we pay attention not to the objects illuminated but to our activity of seeing them, we realize that “reality” is not what we start with but what we end up with. It’s the picture that results from arranging patterns, generating patterns, modifying patterns, and associating patterns until we have a coherent composition.

With a large movement of viewpoint, the patterns of nervous sparks we call “fundamentals” can change. This is a paradigm shift. What once was a dark room with light shining through pinholes in the wallpaper becomes a four-dimensional manifold of emptiness interrupted with transient specks of thermonuclear explosions. It produces a different picture of a different reality. Seeing the universe from more than one paradigm provides a kind of cognitive parallax that gives a sense of depth and historicity to consciousness.

The awareness of different objects and different viewpoints and different realities can lead to an awareness of limits: Each perspective will have its domain of validity. These domains are the basis for what we call the provisionality of theories in science. The nature of cognitive knowledge–that common human trait which is simply applied methodically by science–is not suited to staking claims to The Truth. Provisionality is more limited…and more useful. It’s flexible, adaptable; a tool, not a Procrustean bed. The “I” who thinks of itself as the center of a viewpoint can be liberated from its attachment to particular viewpoints. It can see itself as an explorer of viewpoints, a creator of viewpoints, an artisan of cognitive composition.

This makes of science an art instead of a religion, an invention instead of a ritual. Science is not so much a search for THE TRUTH as it is the generation of truthfulness. This is the distinction between justificationism and critical rationality. Cognitive knowledge is not something that’s justified by being founded on some incorrigible ground. Rather, it’s a mutable metaphor in which every theory and every proposition is open to critical reexamination.

This is what makes peeking through the keyhole so exciting. Everyone’s carving a different sculpture or composing a different tune or painting a different picture of the universe. Some of those efforts turn out to be quite useful and pleasing. I’ve collected a few; I plan to collect more. If you’ve only got one hanging on your wall, I urge you to make room for a second.