Home Picture of the Day Methane Lakes on Titan? 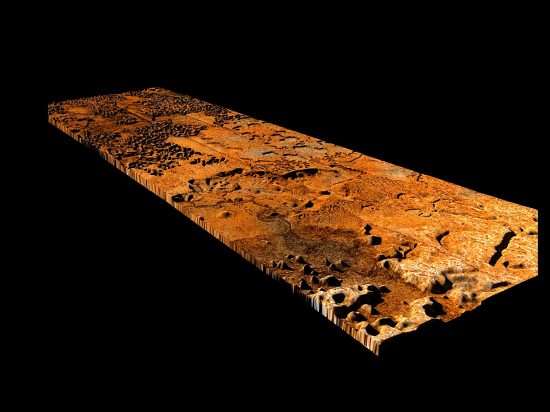 Artist’s impression of Titan based on Cassini radar and data from the Huygens lander. The relative elevations are speculative, based on the assumption that liquid is flowing downhill. Credit: NASA/JPL/ESA/SSI and M. Malaska/B. Jonsson. Click to enlarge.

No precipitation of any kind was detected on Titan.

The Cassini mission to Saturn is over, but planetary scientists continue to analyze its data set. One of the most studied objects around Saturn is its giant moon, Titan.

Scientists believe that liquid methane exists on the surface of Titan, constantly replenished by methane raining out of its atmosphere. However, images from the Huygens lander revealed a landscape with the consistency of damp sand. A field of small pebbles extended to the horizon. Spectrographic analysis of the “rocks” indicated that they are made of water ice. Ice acts like rock when it is at a temperature of minus 179 Celsius. What Huygens did not detect was liquids of any kind.

According to a Cornell University press release, astronomers recently constructed a new topographic map of Titan. Several new features, including some small mountains and two depressions in its equatorial region were found. Titan’s “lakes” are also a topic of research in the consensus community. However, Electric Universe proponents think differently about the potential for liquid hydrocarbons on its surface.

One discovery leads to a puzzle: researchers found that “…lakes exist hundreds of meters above sea level, and that within a watershed, the floors of the empty lakes are all at higher elevations than the filled lakes in their vicinity.”

Another mystery is that the lakes are contained in sharply-defined depressions. As the announcement states, they “…literally look like you took a cookie cutter and cut out holes in Titan’s surface.” They are also enclosed by steep ridges, some of them hundreds of meters high.

Titan’s low gravity means that methane gas is constantly escaping from its atmosphere. Sunlight also causes the methane molecule to dissociate into its carbon and hydrogen constituents. Conventional theories state that Titan is billions of years old, so why do the lakes exist?

Team members speculate that so-called “cryo-volcanoes” replenish Titan’s atmosphere. They are thought to bring gases out from the interior as Titan is squeezed and twisted by Saturn’s tidal forces. However, in an Electric Universe, it is more likely that Titan retains its atmosphere because it is a relative newcomer to the Solar System. Saturn contains a great deal of methane in its atmosphere, so if Titan came into existence just a few thousand years ago, it has not had time to lose the gas to space.

A previous Picture of the Day noted that flowing methane (or ethane) has never been found on Titan and that the entire line of reasoning follows from an assumption without foundation. The so-called “river valleys” on Titan do not look as if they were carved-out by flowing liquids. Electric Universe advocates predicted that an examination of the images would reveal the “rilles” going uphill and downhill, rather than always downhill, as a moving stream would do. Rather, what we see on Titan are probably electric discharge effects.

On July 8, 2009, Cassini detected a flash of light from Titan. The infrared reflection came from an area known as Kraken Mare (“Monster Ocean”) that covers more than 400,000 square kilometers. Riverbeds seem to flow into several of the presumed lakes. A previous Picture of the Day suggested that the lakes on Titan are similar to the “maria” on the Moon. Moreover, all the “river” channels on Titan are dry, with dark, flat floors. In reality, Titan’s Kraken Mare resembles Mare Serenitatis—the same rilles are present on Titan as on the Moon.

In previous Picture of the Day articles about the Moon, “sinuous rilles” were identified as the scars left by plasma discharges of immense proportions. Practically every body in the Solar System, other than the gas giant planets, exhibit such rille structures.

Electric Universe advocate Wal Thornhill observed that the images from Cassini are “…typical of arc machining of the surface. I would compare them directly to the scalloped scarring on Jupiter’s moon Io and the flat, melted floor depressions that result. Such floors would be expected to give a dark radar return.”

The “lakes” are close by the vast dune fields in the polar regions, suggesting an electrical origin. Since electrical activity has been shown to carve the surface of other rocky bodies, why should it be a surprise to find that it was also at work on Titan? The infrared light seen by Cassini was reflected by the hard, glassified crust left by an interplanetary plasma discharge.