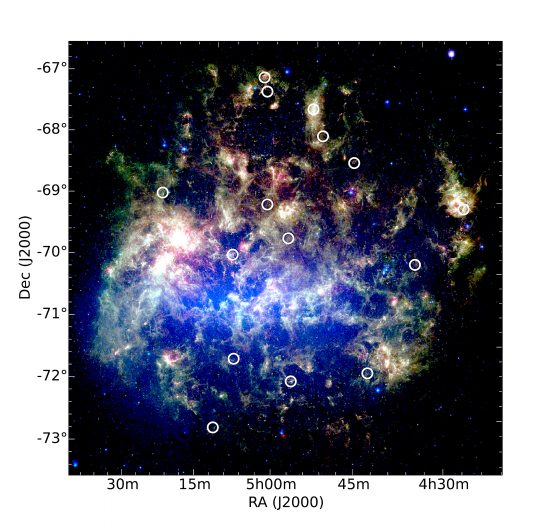 The Large Magellanic Cloud with the locations of 15 star clusters where multiple generations of stars have been discovered. Credit: Karl Gordon and Margaret Meixner – Space Telescope Science Institute/AURA/NASA. Compilation by Bi-Qing For and Kenji Bekki (ICRAR/UWA). Click to enlarge.

Stars are not gravitational entities.

A recent press release relates that there is something wrong with how conventional theories describe star formation. Star clusters in the Large Magellanic Cloud (LMC) are not assembled correctly: some stars are too young. As Dr. Bi-Qing For wrote:

“Our models of stellar evolution are based on the assumption that stars within star clusters formed from the same material at roughly the same time.”

Stars are born and age according to theories that involve hydrogen fusion. Stars form a hydrogen-burning region outside their helium cores. As they age, stars use heavier atomic nuclei as fuel. Astronomers believe they should be cooler and brighter at that stage. More changes take place in temperature and brightness as they continue to evolve. Stars are supposed to follow that sequence until they burn out or explode based on the well-known Hertzsprung–Russell diagram.

Stars residing in clusters within the LMC do not conform to the standard model. The theory of star formation requires gravity to concentrate dust and gas into smaller and smaller dimensions until fusion ignites, so regions where the gas is most dense are where more stars should be born. They found that stars on the outside of many nebulae are older than those inside.

In an Electric Universe, gravity is overshadowed by plasma behavior. Stars are not compressed hydrogen gas, they are the loci of galactic z-pinches in Birkeland currents, so electricity forms double layers along their current axes. As elsewhere written many times, positive charge builds up on one side of a double layer and negative charge on the other. Strong electric fields initiate electric charge flow through nebular plasmas, causing charges to spiral down into filaments that can eventually form arc mode emissions.

Arc lamps emit light at specific frequencies, depending on the gases that they contain. Electricity causes the gaseous plasma to glow. Since 90% of the light in planetary nebulae comes from ionized oxygen, they should be thought of as gas discharge tubes and not as balls of gas, just as the Electric Star theory explains. Rather than kinetic energy supplied by gravity, nebulae are powered by electricity.

As mentioned, power density in dusty plasma is greatest along the axes of Birkeland current filaments. Electromagnetic fields draw matter toward them from surrounding space more strongly and from a greater volume than is possible with gravity. When sufficient matter accumulates in the filaments they luminesce and generate stellar parturition.

Conventional models cannot discover how old stars might be, so astronomers will always find new mysteries in their theoretical models.