Home Picture of the Day Swimming Around Rocks 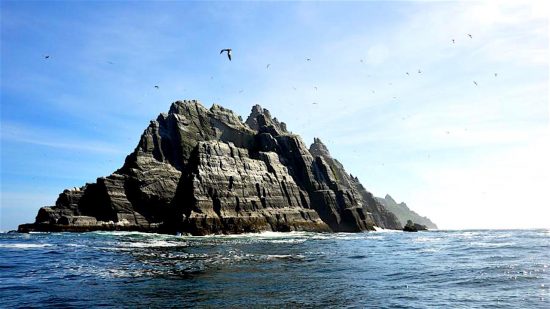 When Einstein introduced the theory of relativity in 1905, astronomers thought the universe consisted of only the Milky Way.

What we think of today as galaxies were thought of then as tiny clouds within the Milky Way. It was 20 years later that Hubble showed they were composed of stars and must lie outside the Milky Way.

Astronomers have been arguing ever since about how far outside they are. Estimates of distance are based on what can be seen in a mere handful of photons. Calling those estimates “speculations about distance” would be more honest. A quarter century after Hubble’s discovery, astronomers revised the calibration of the period-luminosity curve for Cepheid variables. That curve was their primary tool for estimating galactic distances, and the (assumed) redshift-distance relationship was calibrated by the Cepheid yardstick. In consequence of the revision, the distances to the galaxies doubled. But Halton Arp’s observations have undermined the redshift-distance assumption, and galactic distances have collapsed.

As much as we might wish the galaxies were rushing about to conform themselves to our expectations for them, it’s highly likely they are, and have always been, going about their business in total disregard of us. It’s deflating to our egos, but the universe doesn’t seem to think our theories are as important as we think they are. In fact, our theories are only metaphors for a few recurrent experiences we have of a few tiny pieces of the universe during a few insignificant moments of its existence. We have only a vague idea of how we come to create these metaphors, and we have no idea why we do it.

But we sure love to fight over them. We promote and destroy careers and lives not just over what people say they believe but over what they merely find curious. Remember Gordon Atwater: He was director of Hayden Planetarium when Velikovsky published Worlds in Collision. He planned a program illustrating Velikovsky’s ideas. Before he could fire up his star projector, he was fired and blacklisted. He never held another job in astronomy. Readers can no doubt recognize the parallels with the Inquisition.

Julian Jaynes wrote near the end of The Origin of Consciousness:

“It is not religion but the church and science that were hostile to each other. And it was rivalry, not contravention. Both were religious. They were two giants fuming at each other over the same ground. Both proclaimed to be the only way to divine revelation.”

Attributing absolute truthfulness to a concept can fill this need. But it simultaneously undermines response-ability: The concept becomes an icon that can’t be altered or even questioned. It can’t be doubted. It can only be believed, thereby placing it beyond the operation of our cognitive abilities. When we experience something outside the concept’s domain of meaning, something the concept can’t explain or explains ineffectually, we can’t respond as fully and as harmoniously as if we were able to create a new concept. Responsibility is shifted to the absolute, and we therewith lose power to act. It gives us something other than ourselves to blame when things go wrong, but it reduces us to being helpless victims. We become cognitively impaired by paradigm paralysis.

At this point, one is tempted to jump to the conclusion that “anything goes”. But this is merely jumping to another rock, one that assumes certainty is zero instead of 100%. It’s often called relativism, but it’s only an absolutism of negation.

If we’re not to cling to rocks of either negativism or positivism, we must learn to swim. Leaving everything open to critical re- evaluation means accepting every concept as provisional. It means living with uncertainty. It means abandoning the idea of constructing a foundation for knowledge and embracing instead the idea of knowledge as a succession of strokes of understanding.

Critical rationality is not an ability to construct theories we can subsequently use to isolate ourselves from the flood. Rather, it’s an ability to immerse ourselves in the flood and to navigate in it. It enables us to understand the changing characteristics of each wave and to respond to the current. It empowers us to surf the ocean of the universe and therein to discover joy.