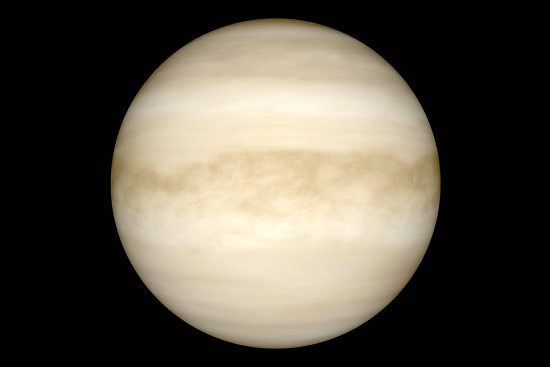 Venus is an electrically active world.

The European Space Agency’s (ESA) Venus Express was launched from Baikonur Cosmodrome in Kazakhstan on November 9, 2005. The spacecraft entered orbit around Venus on April 11, 2006.

One its “surprising” discoveries was electric discharges in the planet’s upper atmosphere. The discovery was completely unexpected, because atmospheric density was thought to prevent the formation of lightning bolts. As Dr. Donald Gurnett, a physicist at the University of Iowa wrote at the time:

However, Venus Express found low-frequency electromagnetic radiation in bursts lasting fractions of a second. Called “whistlers”, the bursts are considered a sure sign of electrical phenomena. A whistler is an extremely low-frequency electro-acoustic wave that is normally generated by lightning. They are called whistlers because they demonstrate a characteristically decreasing frequency falloff in detection equipment. In some short-wave radio transmissions, the whistle can be heard while tuning between stations.

Venus radiates in the infrared with twice the energy it receives from the Sun, so there must be a source for that heat. Venus has an extremely weak magnetic field and no magnetosphere, but it does possess an ionosphere, so it is an electrically charged body. Its ionospheric charge flow carries electricity from the solar wind, the stream of ions ejected by the Sun, into the Venusian environment. It could be that the planet is constantly charging and discharging in the infrared.