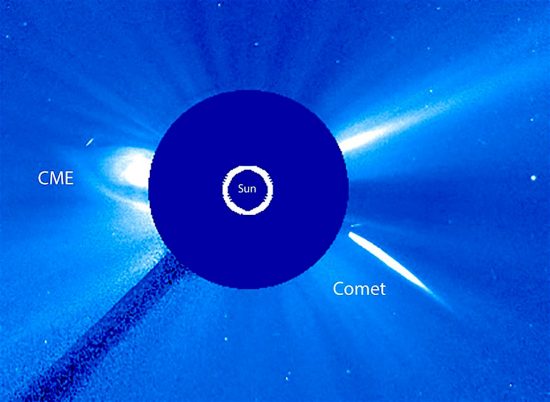 If we can see the tails of comets fly off in the direction opposed to the Sun with an accelerated velocity, and if we believe these tails to be matter and not optical illusions or mere tracks of vibrating disturbance, then we must admit a force in that direction, and we may establish that it is caused by the Sun if it always depends upon his position and distance.
— James Clark Maxwell

Astronomers think comets are “dirty snowballs” despite images from space probes that reveal blackened and cratered surfaces. No snow or high albedo crust indicating icy conditions were observed. When the Giotto mission approached Halley’s comet in 1986, it was found to be the blackest object ever seen.

In June 2005 Deep Impact launched a projectile designed to strike the surface of Comet Tempel 1 like an artillery shell. At the time, astrophysicists wondered if they would see anything beyond a small plume of dust and vapor. Electric Universe proponent Wal Thornhill’s predictions, on the other hand, proved correct, Tempel 1 resembled an asteroid more than anything else, with craters, boulders, and cliffs instead of snow fields and steam vents. Water was detected around the comet, but there was too little ice on the surface to account for it.

Comets are supposed to be cold remnants condensed from the Solar System’s primordial nebular cloud; “leftovers” that did not consolidate into large planetary bodies. However, the surface of 67P/Churyumov-Gerasimenko, for example, is tough and hard, not fluffy and frangible, as the Rosetta mission proved.

A previous Picture of the Day pointed out that Comet Shoemaker-Levy 9 exploded when it was more then 400 million kilometers from the Sun, but no volatile compounds were visible. Comet Borrelly is hot and dry instead of cold and wet and no trace of water could be found on the surface of Wild 2. If comets are the remains of electrical events that took place early in the life of the Solar System, then their “anomalous” appearances can be easily explained.

There is a radial electric field surrounding the Sun, so, as comets get closer to its high charge density, they lose electrical equilibrium and begin to glow. Plasma sheaths surrounding cometary nuclei are accelerated out and away, sometimes forming tails millions of kilometers long.

Since the Sun’s electric field is a dynamic structure, it changes in strength and size depending on the electric charge flowing into it from the galaxy. It is in a state of constant flux, requiring only a small trigger for it to violently discharge. Such discharges are known as solar flares or coronal mass ejections (CME).

When Comet NEAT circled the Sun in 2003, it initiated a CME that seemed to hit the comet. Astronomers discount such relationships because the Sun is so much larger than any comet—they do not accept electrical interactions between bodies in space. However, several other comets are associated with powerful flares. One event can be an anomaly, but three or more can not be dismissed as mere coincidence.

Comet 96P/Machholz came so close to the Sun that if it were composed of ice with a small percentage of rock and dust it should have disintegrated. Instead, its intense charge differential caused a gigantic CME to discharge from the Sun, blasting out for millions of kilometers.