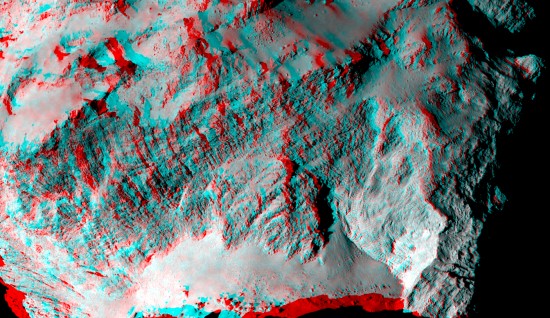 According to a recent press release, one of Rosetta’s onboard instruments is detecting oxygen and hydrogen surrounding comet 67P/C-G. “ALICE” is an ultraviolet imaging spectrometer built to examine the comet’s coma, as well as study the surface. There is, however, a frustrating result from ALICE. Dr. Alan Stern, principal investigator and an associate vice president of the Southwest Research Institute (SwRI) Space Science and Engineering Division, said, “We’re a bit surprised at both just how very unreflective the comet’s surface is, and what little evidence of exposed water-ice it shows.”

The observations are no surprise to Electric Universe advocates. In fact, it is surprising that astrophysicists are still in the dark when it comes to comet morphology. After visiting five comet nuclei in the past few years, finding them to be hot, dry, and rocky, it is strange to find them continuing to promote the “dirty snowball” theory of comets.

Recent revelations about comets are more easily understood when an electric comet theory is considered. Black, burned nuclei (Haley’s comet); craters and rocky landscapes instead of ice fields (Comet Wild 2); energetic jets; ion tails; sulfur compounds that require high temperatures to form; and an abundance of ultra-fine dust all point to electricity as an active agent. Most important of all, water vapor is more prevalent farther away from comet nuclei than close in—the exact opposite of what should be found if water ice and sublimation drive cometary jets.

As early as July 2004 Picture of the Day articles provided data contradicting the theory of cometary snowballs. For example, some comets exhibit comas and tails when they are far from the Sun, supposedly the energy source for all cometary activity. If the Sun is what causes water ice to melt, or as announced in the past with some surprise, frozen carbon dioxide to sublime and form jets, then comets past the orbit of Jupiter, like Hale-Bopp, should not exhibit those features.

Comets are most likely debris left over from catastrophic events on Earth and other planets in the recent past, so there could be comets in the Solar System that are composed of water ice, since ocean water could have also been explosively launched into solar orbit at the same time as the chunks of rock. However, those water-based objects have not yet been seen. All comets, so far, are composed of dust and rocky regolith, without evidence of water ice, as the image at the top of the page reveals.

An electric comet theory was proposed by Ralph Juergens in the early 1970s as a part of his electric Sun model. His colleagues, Dr. Earl Milton, and Wal Thornhill developed the model after Juergens’ untimely death in 1979. The first article about electric comets on Thornhill’s website appeared in October 2001, along with his predictions for the Deep Impact mission. Later articles appeared in January 2004 when the Stardust mission encountered comet Wild 2. Some results of the Deep Impact experiment were reported in July 2005.

As Wal Thornhill writes: “The EU model predicts that all active comets will exhibit frequent, short outbursts in different spots on their surface. The outbursts happen because they are electrical discharge phenomena, known technically as (cold) cathode jets.”

Cathode sparks erode minerals from the surface of comets and, as Thornhill elucidates, they can dissociate comet minerals containing oxygen atoms so that the ionized O- atom combines with H+ ions, or protons, from the Sun’s solar wind, forming the OH hydroxyl molecule. “It is an assumption,” Thornhill insists, “that it is formed by the breakdown of H2O ‘vapor’ by solar UV radiation.”

As long as the outmoded water ice model continues to predominate, those studying comet phenomena will announce “mysteries” and “surprises”.