Home Picture of the Day Smoke Without Fire Part Two 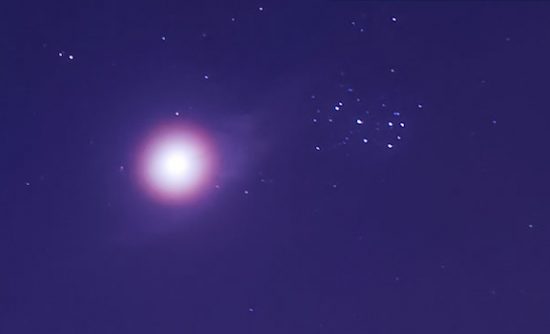 Venus surrounded by an aureole and a wispy cloud, with the Pleiades to the right. Detail from a photograph taken at Tihany (northern shore of Lake Balaton, Hungary). © Tamás Ladányi (12 April 2015). Used with permission. Click image to see the photographer’s gallery of astrophotos.

Whatever the explanation, it would seem that Venus’ ‘smoking’ is the same as its ‘burning’ and that such incidents – regarded as portents – occurred throughout the historical period on a decadal or centennial time scale, ruling out any dramatic scenarios such as Velikovsky’s Venus comet. The most promising solution is an atmospheric optical effect, as suggested by von Humboldt.

Three possibilities arise. Firstly, von Humboldt’s “kind of halo formed around the planet” corresponds to the phenomenon known as a planetary aureole or corona, as described in meteorological textbooks:

“At times small, feebly luminous coronae are to be seen even round Venus, Jupiter and the brighter stars.”

Secondly, perhaps Venus’ ‘fuming’ referred to scintillations or the so-called green or blue flash on the planet, often caused in heliacal positions by disturbances in the earth’s atmosphere; “Venus and Mercury, which at times are observed as fairly narrow crescents, do occasionally scintillate quite appreciably, and … Venus can even show changes of colour when very close to the horizon. When the disturbance in the air is very pronounced and the planets are low in the sky, one will almost invariably notice some changes of intensity.” And thirdly, it is even possible that Venus can produce its own Gegenschein (‘counterglow’), a subtle roughly circular reflection off dust particles in the ecliptic plane.

All of these optical effects are strongly modulated by changes in the composition of the atmosphere, including the dispersion of fine volcanic dust. The events logged in the Aztec chronicle may not be unrelated to the eruption of Cotopaxi (Ecuador) in 1532 and 1534, at a ‘cataclysmic’ magnitude of 4 on the volcanic explosivity index (VEI). And it is tempting to relate the Pipil account of Venus’ incandescence to the great eruption of Krakatoa in 1883; the remarkable sunrises and sunsets seen in the following years could have something to do with the ‘battling stars’, but a memory slip would again have to be postulated – of at least 7 years.

At any rate, a volcanic component is not requisite; aureoles and scintillations occur on Venus regardless. Thus, von Humboldt’s hunch of an “optical illusion” deserves resuscitation, but his idea that the natives of a volcanically active region would conflate the nocturnal glow of a volcano with the morning star is unattractive – close, but no cigar. If anything, it is rather more likely that the locals recognised a causal link between the volcano’s outbursts and Venus’ transformations.

The depictions of Venus’ ‘smoking’ in the Aztec codex are consistent with the optical approach: an orange aureole surrounds the central ‘star’ Venus and various other stars or sparks, while the bits of emitted smoke could represent a wispy cloud. Venus’ aureole is variously oval and circular, just like the enclosure seen in the pictures. The general Meso-American obsession with Venus would guarantee the significance imputed to the innocuous diffractions.

Bringing their designation of comets as ‘smoking stars’ back into the equation, it would appear that the Aztecs and their descendants used words for ‘smoking’ and ‘burning’ in relation to any sort of transient glow in the sky, including cometary tails and planetary haloes. This practice is comparable to the theory of some ancient Graeco-Roman philosophers that comets, aurorae and meteors were ‘exhalations’ of the earth. Comets or a cometary phase of Venus are almost certainly not indicated by the Aztec chronicle entries and the Pipil account, which concern far more anodyne events. Yet even if this brick must be removed from Velikovsky’s intellectual edifice, other ancient traditions provide robust evidence for the notion of a past cometoid morning or evening star, however that is to be understood physically. Hence, Velikovsky’s broader thesis does not yet go up in smoke.