Home Picture of the Day Smoke Without Fire Part One

Smoke Without Fire Part One 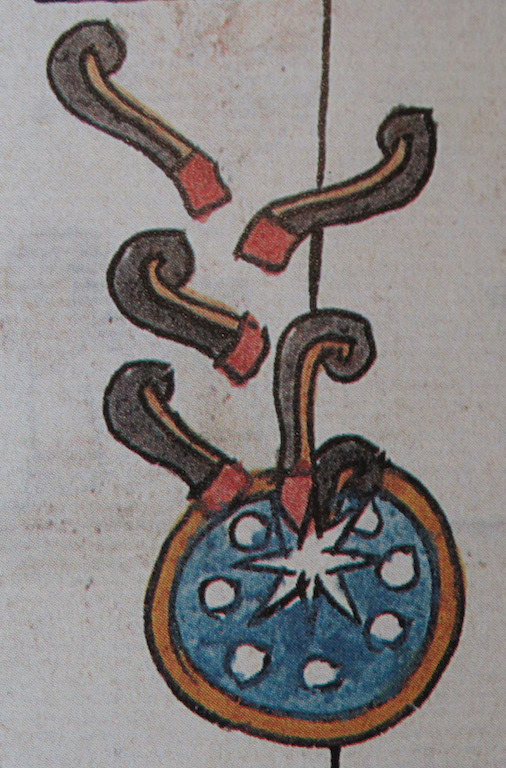 From a study of ancient sources, the catastrophist polymath Immanuel Velikovsky (1895-1979) famously concluded that the planet Venus had presented a comet-like appearance just a few millennia ago.

Instead of a puerile response of outright condemnation and censorship, the academic world ought to have invested its energy in a careful and dispassionate evaluation of Velikovsky’s individual sources.

Velikovsky’s evidence for the ‘comet Venus’ included the claim that “the peoples of Mexico” passed on “early traditions …, written down in pre-Columbian days” according to which “Venus smoked”. The savant does not appear to have consulted the single primary source he adduced, misspelling the name of an early editor of it. This is the Aztec Codex Telleriano-Remensis annotated by Spanish friars (1553-1563 CE), which contains several illustrations of Venus’ ‘smoking’ as a hemispheric, oval or circular “patch of sky … with a large central star and smoke volutes arising from the form.” The accompanying Spanish text records a series of puzzling contemporary observations of Venus. In the translation of Eloise Quiñones Keber:

“Year of two houses [2 House] and 1533 there was an earthquake. And they show smoke coming from the star they called citlal choloha, which is the one we call Venus, a star they considered to be very important.”

“Year of three rabbits [3 Rabbit] and 1534 don Antonio de Mendoza came as viceroy of New Spain. They say that the star was smoking.”

“This year of six houses [6 House] and 1537 the blacks tried to rebel; in the city of Mexico the instigators were hanged. The star was smoking and there was an earthquake, the worst I have seen, even though I saw many of them in these lands.”

“Year of eight reeds [8 Reed] and 1539 … The star was smoking.” As these entries preserved historical observations of Venus between 1533 and 1539 CE, they were neither traditional nor pre-Columbian or shared by multiple “peoples”, exposing Velikovsky’s wording as disingenuous on all counts – what was he smoking?

Yet despite Velikovsky’s smoke screen, it is clear that the Aztec chronicler recorded some type of genuine unusual transient event. Ignoring the stated association with Venus, the German ethnologist Ulrich Köhler (1937-) related these reports to sightings of comets. However, although the Aztec are known to have called comets ‘smoking stars’ (citlalin popoca), the same codex from which the above quotations are taken clearly distinguishes the Venus events from comets (xihuitli) by depicting the latter as snakes and explicitly labelling them ‘comet’ (cometa). This distinction is significant even if the Spanish word cometa could have meant ‘meteor’. Clearly, the cometary angle to this puzzle is all smoke and mirrors.

Velikovsky relied on the Prussian naturalist and explorer Friedrich Alexander, baron von Humboldt (1769-1859), for these Aztec data. This gentleman suspected a volcanic trigger and tried to accommodate Venus:

“I am ignorant of the phenomenon, which in the commentary is often designated by these words … The volcano of Orizava bore the name of Citlaltepetl, mountain of the star; and we may presume, that the annals of the empire contained the different epochas of the eruptions of this volcano. … Now, I ask, what optical illusion could give Venus the appearance of a star throwing out smoke? Was it a kind of halo formed around the planet? As the volcano of Orizava is placed to the east of the city of Cholula, and its fiery crater resembles during the night a rising star, the volcano and the morning star may in symbolic language perhaps have been confounded with each other.”

An important clue comes from an anonymous informant of the Pipil (western El Salvador), who are modern-day relatives of the ancient Aztec. Commenting on Venus as morning star (neštamaláni) in relation to the fixed stars, this person said:

‘But he, when they seize each other and when they hit each other, can catch fire: This morning star once burned. When he had finished burning, the smallpox epidemic began. Only decaying huts remained, all their owners died. I have seen it myself, when this morning star burned, – it was twice twenty and ten and another four years ago.

’The anthropologist who recorded these words in 1930, unaware of the parallel with the Codex Telleriano-Remensis, resorted to a comet again for an explanation:

‘In combat with the fixed stars, Venus can catch fire. Misremembering by two years, the date which the narrator gives could point to the comet 1877 III discovered by Coggia, which came so close to the earth around mid-July that it was visible to the naked eye in the evening sky of Salvador at a stellar magnitude of 1.3. Around the same time, Venus was evening star, but the comet kept its distance from it, – the Indian will have subsequently connected this appearance with an old belief which could have rested on more reproachless observations.’

Although the Pipil were aware of the astronomical identity of Venus as morning and evening star, the explanation is too contrived, both because Venus and Coggia’s comet (C/1874 H1) were never seen in proximity to each other and because a nebulous memory must be assumed for the date. Other possibilities fail to convince as well. The zodiacal light can envelop Venus, but does not appear to emanate from it like smoke and occupies a vastly larger segment of the sky. The conflict between the stars suggests some turbulence, like a meteor shower, but it is not clear how this could affect the brightness of Venus. The adventurous suggestion of a temporary visibility of Venus’ magnetotail cannot be invoked, because it would be against all odds that western astronomers would never have observed such over the past 500 years of diligent observation, while indigenous Mexicans did.