Home Picture of the Day Straight-Edged 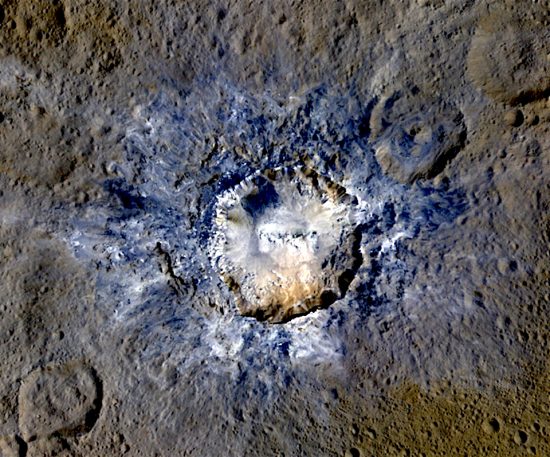 Why do craters exhibit polygonal features?

A major tenet of Electric Universe theory is that the Solar System was chaotic a few thousand years ago. The features on all the moons and rocky planets are forensic evidence for that idea. How many thousands of years isn’t important, since it is not millions of years or even hundreds of thousands of years under consideration. The premise is that electricity from highly active celestial objects discharged many times to the surfaces of most Solar System bodies, like Ceres.

According to a recent press release, a crater whose “…polygonal nature (meaning it resembles a shape made of straight lines) is noteworthy because most craters seen on other planetary bodies, including Earth, are nearly circular.”

34-kilometer-wide Haulani crater’s smooth floor with a central ridge, like so many other craters in the Solar System, is anomalous since impacts should create a conical or circular formation from explosive force, along with a field of blast debris. Indeed, the number of crater anomalies found on rocky planets and moons seems to suggest that the round craters are uncommon and the “anomalies” the common.

To NASA mission specialists the greatest mystery of all is the shape of Haulani crater: it is a hexagon. NASA prefers to say that: “The straight edges of some Cerean craters, including Haulani, result from pre-existing stress patterns and faults beneath the surface.”

One science blog put it this way: “On Rhea and Dione, we think that the non-roundness of the craters is caused by the existence of fractures in the crust; those fractures were zones of weakness, and the rupturing of the impact crater followed those weaknesses, making straight rim segments.”

How can the detonation of a colliding rock cause a hexagonal crater? No experiment has been able to demonstrate a polygonal shape left behind after an explosive event. Explosions do not aggregate into stable configurations; they induce chaotic behavior that leaves little in the way of identifiable forms. To propose that it is pre-existing stress patterns is to say that straight-edged, underground faults and cracks are everywhere, and in just the right arrangements for square, pentagonal or hexagonal formations to result from explosive impacts.

Or, a standard explanation for why so little debris remains behind is that small bodies have little gravitational attraction, so the remnants of the explosive events aren’t retained in the vicinity. It sounds like a reasonable hypothesis until one examines craters on large planets like Earth and Mars. Many hundred-kilometer-wide “impact sites” on Earth have little in the way of eruptive fallback: their flat-bottomed floors are swept clean, although glassified breccias are often incorporated into their walls.

The answer to how immense craters with similar morphology can develop with straight-sided polygons is found in plasma discharge experiments.

In previous Picture of the Day articles, evidence was provided for plasma discharges on planets and moons. As mentioned, electrical activity in the form of lightning bolts, diffuse glow-mode clouds of energetic particles and rotating Birkeland currents could be the causative agents for bizarre conditions on celestial bodies, like Ceres. It appears as if the dwarf planet might have been caught in a titanic particle beam that excavated Haulani crater and the other geological features incised on its face. Due to plasma instabilities in the discharge, a hexagon was cut deeply into its crust. When the electrical energy was withdrawn, the crater remained, a “fossilized” geometric shape permanently burned-in.

It is not beyond reason to suggest that star systems could experience extreme duress. Some speculate that rocky bodies are expelled from stars and gas giants because of an electrical imbalance that appears to be a common phenomenon in the galaxy. Maybe some celestial bodies are not local to the Solar System but arrived from great distances. If gas giants and stars give birth through electrical parturition, and the planet hunters claim hundreds of gas giant-like planets in extremis, revolving at distances closer than Mercury is to the Sun, those planets are most likely experiencing rapid modification due to electrical interactions with their parent bodies. The Milky Way could be a wilderness of rocky bodies of every shape and size ejected from stars, especially brown dwarf stars, orbiting more powerful, more violent companions.