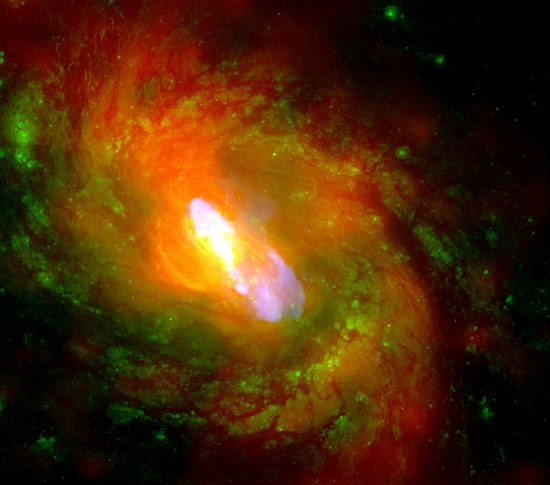 Plasma is the flame that lights the stars.

If you knew
what you will know
when your candle
has burnt low,
it would greatly
ease your plight
while your candle
still burns bright.
― Piet Hein

Previous Pictures of the Day report that X-ray jets from galactic cores are accelerated by electric fields. In contrast, astronomers report “strong winds” of X-rays “blowing” out of the core of Galaxy NGC 1068. Called “ultra-luminous X-ray sources” (ULX), they are points across the sky that emit more radiation than a over a million stars. They are also considered to be “mysterious”, since, if the sources are generated by normal stars, such energy producing stellar processes should tear the stars apart. So, black holes are invoked to “explain” the observation.

The source of NGC 1068’s emissions is said to be an “average sized” black hole accelerating “hot gas” around its event horizon. Standard Theory suggests that gas is heated by X-ray bursts from the SMBH, whereupon it is ejected along a tangential trajectory at an average velocity of 1.6 million kilometers per hour.

The Chandra X-ray Observatory results were combined with those from the Hubble Space Telescope in order to compare temperature differences between the galaxy and the jet of X-rays. The spectrographic reading of the jet showed it to be over 100,000 Celsius, 20 times hotter than the surface of the Sun.

X-rays in space, no matter the source, are not created by gravity and acceleration, regardless of their strength. Charged particles (plasma) accelerated by electric currents spiral in electromagnetic fields and shine in all high energy frequencies, extreme ultraviolet, X-rays, and sometimes gamma rays.

No gas in space can be heated until it gives off X-rays and “blows like a wind”. No gas can remain intact at such temperatures because electrons are stripped from the nuclei, causing it to become ionized plasma. In galactic circuits, power flows inward along the spiral arms where it is concentrated and stored in the central plasmoid, or galactic bulge. When it reaches a certain current density it discharges, usually out of the galaxy’s spin axis as an energetic jet. Laboratories replicate the phenomenon with a plasma focus device.

Electromagnetic forces confine jets into thin filaments that remain coherent for thousands of light-years. NGC 1068 indicates that material from the galactic core reaches more than 3000 light-years from its source, but that estimate could be off by a significant factor. Jets usually end in double layer  lobes extending outward by many times the size of the galaxy. The lobes emit strong electromagnetic frequencies, including radio waves. The diffuse currents then flow toward the galaxy’s equatorial plane and spiral back into its nucleus.

Hannes Alfvén said that “exploding double layers” should be identified as a new class of celestial object. Double layers in space plasmas form most of the unusual structures that mystify astronomers. Galactic jets, toroids, and glowing clouds are all examples of electricity flowing through plasma across the light years.