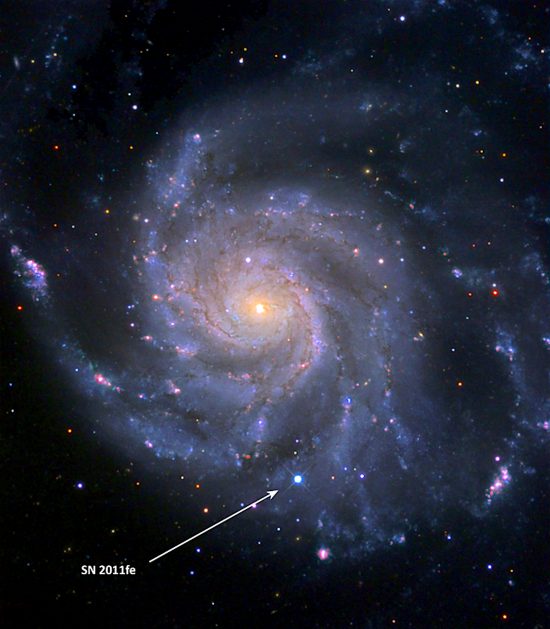 If the Universe is expanding at an accelerating rate, then the future is dark.

In 1998, two research groups discovered what is now called in consensus circles, “dark energy”. Saul Perlmutter of the Lawrence Berkeley National Laboratory and Brian Schmidt from the Australian National University projects independently discovered that the Universe was accelerating in its expansion. Since it is based in Big Bang theory, the expansion of the Universe is challenged by Electric Universe concepts.

Ideas about redshift and gravity are fundamental to the Big Bang. Light is thought to shift toward the red end of the spectrum when a celestial object is moving away. Objects interpreted to be far away appear to move faster than objects near Earth, so the Universe is expanding in conventional viewpoints.

Another important principle in Big Bang cosmology is that gravity rules the Universe. The conundrum in modern astrophysics is that if gravity is the only controlling force, then any inertial moment applied to the monobloc by a Big Bang explosion must be slowing down—an inescapable conclusion based on gravity.

What Perlmutter and Schmidt thought they found was that the expansion of the Universe was not slowing down, it was accelerating. When they plotted redshifted “velocities of recession”, the figures suggested that the expansion rate of the Universe is greater today than in its early days. However, some scientists are questioning the existence of dark energy. Is there a more likely explanation for the supernovae anomalies that led to the dark energy theory?

The Supernova Legacy Survey discovered that brighter supernovae were more common in the past—about 12% brighter 8 billion years ago than they are now. No one knows why the early Universe had more Type 1a supernovae. There is a clue that astronomers are missing: brighter starbursts are found more often where there was a high rate of star formation.

As Electric Universe theory predicts, more stars are born where there are greater flows of electric charge, which could also initiate a greater number of stellar explosions with anomalous luminosities and high redshifts. That would make highly charged, nearby objects undergoing electrical discharges look like remote, high redshift supernovae that are too bright for their distances. One can imagine the theoretical problems that would result from that misinterpretation.

By way of background, size and luminosity reveal nothing about a star. A red giant star is big because there is low electrical stress in the star’s connected circuit. A blue-white star, on the other hand, is under extreme electrical stress—so much so that it could explode due to a breakdown in its double-layer envelope or due to electrical fissioning. No assumption about a star’s age can help when trying to determine if it will explode. In fact, one aspect of high-energy plasma discharges is that they can produce redshifts that have no connection to recessional velocity.

Cosmologists made their first mistake when they ignored electricity as an active force. For example, Supernova 1987a exhibits unmistakable signs of electrical discharge. X-rays from ion excitation, a range of energy curves, and (sometimes) gamma-rays are properties of lightning bolts. Computer simulations demonstrate that plasma phenomena are scalable over several orders of magnitude—they behave in the same way whether in atoms or galaxies. Perhaps supernovae are really flashes of cosmic lightning. If so, then cosmological expansion theories are heading down a rabbit hole.