Home Picture of the Day Reflections 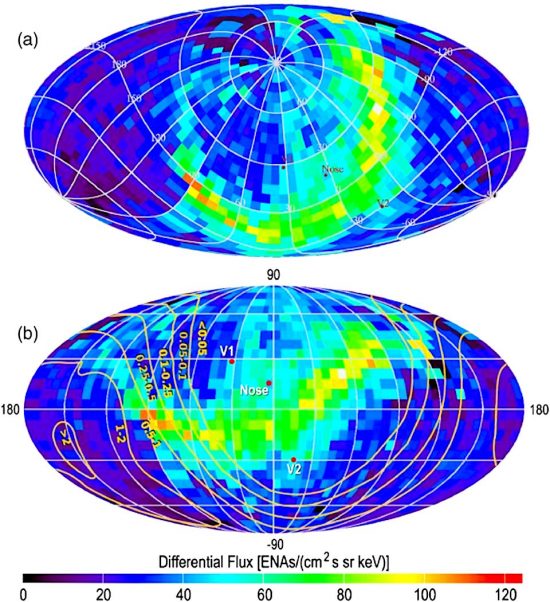 Boundary layers in the heliosphere.

Space is a vacuum, it is said. As written elsewhere, material in space is far more diffuse than any vacuum that can be created on Earth, but matter does exist there. The best vacuums created on Earth reach a 0.1 millimeter spacing between individual atoms. Between stars, however, there is only one atom per cubic centimeter, while in the intergalactic voids it is thought that there is only one atom for every ten cubic meters.

The Interstellar Medium (ISM), the region between stars, is composed of gas and dust grains that are less than one-tenth of a micron in size. One micron is equal to one-millionth of a meter, so they are four times smaller than the frequency of blue light (0.450 microns).

Since the dust particles are that small, blue light is scattered by the ISM, so more long wavelengths reach Earth than without the dust. Called “interstellar reddening”, it is the same phenomenon that makes red sunrises and sunsets. However, dust clouds lit from the side by starlight appear blue for the same reason that Earth’s sky is blue: blue light is scattered by Earth’s atmosphere.

According to a recent press release, the Interstellar Boundary Explorer (IBEX) “…spotted a curiosity in a thin slice of space: More particles streamed in through a long, skinny swath in the sky than anywhere else.”

One important thing to remember is that the ISM contains ionized particles. It is those electrons and positive ions that are critical to understanding the behavior of the ISM and how the Solar System interacts with it. If electric charge separation takes place in different regions of the ISM, a weak electric field will develop. An electric field, no matter how weak, initiates electric charge flow, or electric current. Since the ISM is not electrically neutral, it should be thought of as a plasma.

Plasma in a laboratory isolates itself with thin walls of oppositely charged double layers, so it is probable that the same thing is happening around the Sun. By extension, the same thing is most likely occurring around our galaxy, as well as galactic clusters. At every scale, plasma behaves in the same way.

Since the Sun is positively charged with respect to the ISM, what is known as a “Langmuir sheath” forms around it. In the common interpretation of stars, the sheath is thought to be a “shock front” because the heliosphere is “plowing through” the ISM. So, as conventionally assumed, it must be shaped like a teardrop, since the “pressure” of the ISM ought to compress it on the leading side and then stream away from the following side. Artistic renderings see it as comet-like.

However, IBEX satellite observations do not conform to the assumptions. IBEX scanned the sky, looking for the quantity and magnitude of energetic neutral atoms (ENA). ENAs form when protons combine with electrons and become electrically neutral, forming atomic hydrogen atoms. As ionized particles, they spiral in the Sun’s electromagnetic field, but once they combine, they fly away in a straight line.

In the consensus view, solar wind protons acquire electrons in collisions with hydrogen atoms already located in the heliosheath. If it is teardrop shaped, ENAs would be distributed around the sky in a more-or-less uniform pattern. IBEX observations revealed a “ribbon” of increased ENAs perpendicular to the galactic magnetic field. The teardrop is a sphere.

Langmuir sheaths are electrically charged double layers of plasma, in which opposite charges build up near each other, creating an electric field between them. Double layers can accelerate ions to extreme velocities. Where the solar magnetosphere, or heliosphere, meets the dissimilar charge of the ISM, two regions of dissimilar plasma will form a Langmuir sheath between them, which leads to a spherical formation.

The electric star theory supports IBEX observations because it is exactly where the Sun’s neutral current sheet should interact with galactic electrons in a z-pinch. So, in an Electric Universe, ENAs probably acquire electrons from galactic charge flow.