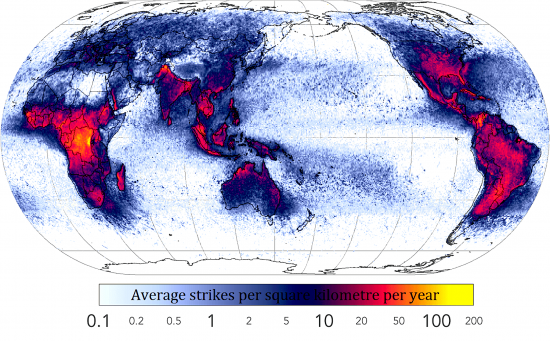 Lightning strikes around the world. Credit: NASA. Click to enlarge.

Weather on Earth is thought to be driven by solar influences on the atmosphere. As Earth rotates beneath the Sun, gases and dust absorb radiation in varying degrees. Heat causes the air to expand and lose density, creating low pressure regions. Denser cold air naturally flows into low pressure, creating convection. Most weather systems, on Earth or elsewhere, are thought to rely on that kinetic explanation: winds blow when cooler, denser air flows into warmer, buoyant air.

However, rather than neutral dust motes building up raindrops due to condensation, ions attract water molecules in the atmosphere. Dust hanging in the air acquires electric charge, making it more attractive to water vapor, because Earth possesses a vertical clear-air electric field of 50 – 200 volts per meter.

Since water molecules are tiny electric dipoles, they are attracted to each other, so they clump together due to Earth’s “fair weather field.” Charged, polarized water droplets are levitated in an electric field between the ionosphere and the ground, therefore cloud height varies because of changes in the atmospheric field. It is sometimes reported in various science journals that lightning from global thunderstorms creates Earth’s electric field. In an Electric Universe, it is charged clouds that short-circuit the atmospheric insulator over many kilometers, generating lightning. Vertical winds in thunderstorms provide evidence that clouds are electrically driven.

Earth’s ionosphere is connected to the Sun by filaments of electricity. This means that the lower atmospheric levels also experience the Sun’s influence because they are connected to the ionosphere. Could these electric circuits linking the atmosphere with the Sun have anything to do with Earth’s climate in either the short or long term?

This leads to the more general idea that all weather is a product of an electrical connection between Earth and solar plasma. The larger view has only recently been considered, so experiments designed to verify the effect that charged particles have on Earth’s weather are now being conducted.

Many years ago, Electric Universe physicist Wal Thornhill anticipated the latest information about an electrical connection between Earth and the Sun:

“Thunderstorms are not electricity generators, they are passive elements in an interplanetary circuit, like a self-repairing leaky condenser. The energy stored in the cloud ‘condenser’ is released as lightning when it short-circuits. The short-circuits can occur either within the cloud or across the external resistive paths to Earth or the ionosphere. The charge across the cloud ‘condenser’ gives rise to violent vertical electrical winds within the cloud, not vice versa.”

Electrical plasma discharges sweep up surrounding air along with charge carriers (ions). The wind appears as inflows and updrafts as well as outflows and downdrafts. It can lift dust particles and erode surfaces. The accepted explanation of thunderstorms as being caused solely by convection, as well as the climatological movement of winds by the Sun’s heat alone, must be reconsidered.