Current Models of the Sun — A Charged Subject Part 2 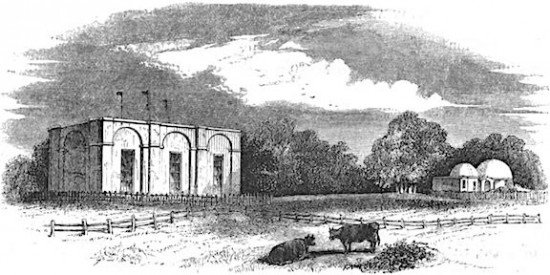 The magnetic observatory at Makerstoun (Roxburghshire, southern Scotland), where John Allan Broun worked from 1842 to 1849. © anonymous (1860).

Might the solar corona not just resemble, but actually facilitate the terrestrial aurora? The German baron Carl Ludwig von Reichenbach (1788-1869) professed as much when he posited, in 1851, that the earth’s magnetic field is “continually receiving accessions through the vast contributions poured out upon the earth by the sun and moon”, which “at once become polarized, that is to say, the current goes towards the terrestrial poles” and so “cause irregularities in the appearance of the northern light”.

In a thought-provoking article released in 1858, the Scottish magnetician and meteorologist John Allan Broun (1817-1879) developed the idea that the sun exerts a direct magnetic influence on bodies in the solar system, for the first time implicating sunspots in the origination of solar eruptions:

“Does not the sun act as a magnet, perhaps as an electro-magnet, the currents forming it being within its atmosphere? Are not the solar spots disruptions of the current due to the positions of the planets with reference to the plane of its equator? … it is not improbable that during the formation of the spots the disturbance is produced, that is to say, at the period when the supposed discharge of the sun’s electrical atmosphere occurs. … That the sun might act as a magnet is of course not a new idea. It had occurred to myself … twelve years ago, that some of the results obtained might be due to the sun’s rotation on his axis … If the sun acts as a magnet, it is probable, from the analogy of our earth, that its magnetic poles will not coincide with the poles of rotation; perhaps even the poles may have unequal forces.”

Like some of his predecessors, Broun also applied solar electromagnetism to the question of cometary tails. Original in his approach was the extrapolation from state-of-the-art experimental work on glow discharges in ionised gasses:

“Sir John Herschel, I believe, has somewhere suggested electricity as the cause which directs the tails of comets. … Are not comets formed of magnetic gases? Is not the tail of the comet due to the directive action of the solar magnet, the curvature of the tail, sometimes seen, being due to the position of the solar magnetic poles relatively to the path of the comet? Is not the condensation of the comet, when approaching the sun, a phænomenon similar to those observed by Dr. Faraday and M. Plücker in their recent researches on the action of the poles of a magnet on certain gases or liquids? might not a like illustration be given of the varying form of the tufts in the nucleus?”

Another area in which Broun may have set a precedent is that the ether pervading the universe is “an electric medium”, which can be made to glow: “Is not the zodiacal light the magnetic æther in a luminous state, repelled by the solar magnetic poles? … Are not the extent and intensity of the zodiacal light related to the periods of the spots, as Cassini and Mairan supposed?” Whilst today only a minor component of the zodiacal light is held to be self-luminous, Broun correctly sensed that ‘ether’, now known as the interplanetary and interstellar medium, is a plasma potentially visible in glow mode.

A further prediction for which Broun deserves accolades is that solar magnetism distorts the shape of the earth’s magnetic field:

“From the known action of the sun on the gases of comets, may we not infer some action of the sun on the gases forming our own atmosphere? … Should not the sun acting as a magnet on the magnetic gases forming our atmosphere, and by induction on the terrestrial magnet, cause the atmosphere to produce an ellipsoidal form, having the greater axis in or near the plane of the equator; thus determining the greater diurnal oscillation in the equatorial regions.”

It was only during the Space Age that scientists could confirm that the earth is contained in a magnetosphere which is compressed on the dayside and extended into a magnetotail on the nightside.

Broun’s pioneering contributions, almost without exception framed in rhetorical questions, were recognised in a poorly edited article by Girish, Gopkumar & Eapen (2013): “Broun applied the experimental results of the behaviour of ionised gases in discharge tubes for the first time to Space Physics which may be considered as the beginning of the astrophysical plasma physics. … As a visionary he could find striking similarities between interaction of solar magnetic fields with cometary or magnetospheric plasma and ionised gas behaviour under external magnetic fields in discharge tube experiments.”