Home Picture of the Day OD-Balls 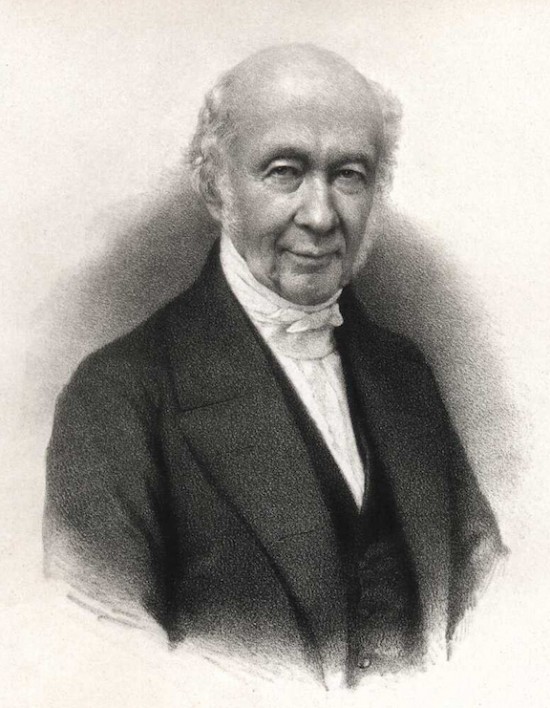 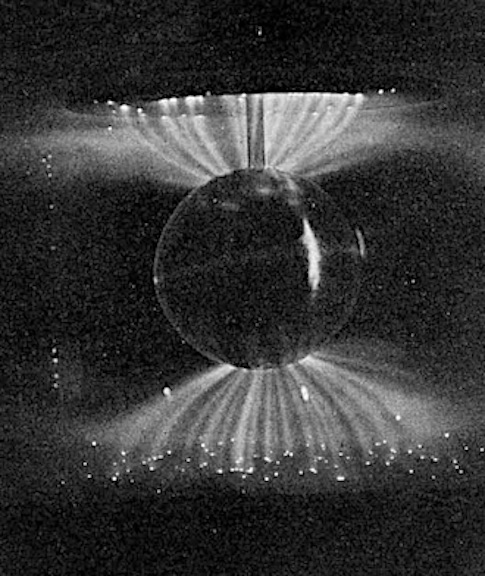 In an earlier post, it was shown that Kristian Birkeland was by no means the first to conduct electromagnetic experiments on terrellae, but that he had precursors as far back as the 13th century CE. Edmond Halley may well have been original when he modelled the earth’s aurorae on a terrella. As fleetingly mentioned, one among many to have a ball in a long line of experimenters was von Reichenbach.

A German baron, Carl Ludwig von Reichenbach (1788-1869) was a respected naturalist, geologist, chemist, metallurgist, philosopher and industrialist. Upon his retirement from industry, he embarked on an extensive study of disorders of the human nervous system. Diagnosing certain people as ‘sensitives’, especially when affected by environmental electromagnetism, he relied on their testimony in a series of experiments on terrellae, which he called ‘terrelles’. According to the report he published in 1851, he worked with a succession of two suspended hollow globes of sheet iron, placing an electromagnet within them and applying varying degrees of electrification to them. The observations satisfied von Reichenbach that the luminous emanations from the terrellae were analogous to the terrestrial aurora:

“… we recognise in it a kind of terrelle, or miniature earth, exhibiting artificial northern and southern lights on a small scale.”

Von Reichenbach labelled the substance responsible for the formations ‘Odic incandescence’ and ‘Odic flames’, in connection with his broader theory of an ‘Odic force’ – for which he is often regarded today as an oddball. Fancifully named after the native Scandinavian god Odin, this was supposed to be tied to but nevertheless distinct from magnetism and electricity, “a peculiar natural force, which extends over the whole universe, … different from all hitherto known forces, and here designated by the word ‘Od’”. On this view, “the ‘Northern-Lights’ are positive od-lights.”

Comparable to the perennially controversial notion of ‘ether’, von Reichenbach also conceived of ‘Od’ as a form of ‘life energy’, producing the radiant wraiths of the newly dead and what are now called ‘auras’. The concept was similar to the prāṇa of Indian, the qì of Chinese metaphysics – though with more emphasis on electromagnetic aspects than on air and breath, rather like Mesmer’s ‘animal magnetism’, Bergson’s élan vital, Reich’s orgone. Quite a different ball of wax than the orthodox repertoire of intellectually acceptable notions, such esoteric associations, combined with the claim that only ‘sensitives’ were capable of perceiving Od, explain why the subject has always remained so odious to scientists.

Von Reichenbach was far from incompetent or scientifically illiterate, however, composing unsensational reports more sedulous than credulous. For one thing, he is credited with the discovery that the geomagnetic field is mostly due to iron unevenly distributed throughout the earth’s interior, just as in an iron meteorite, whilst also “continually receiving accessions through the vast contributions poured out upon the earth by the sun and moon”, which “at once become polarized, that is to say, the current goes towards the terrestrial poles”, and so “cause irregularities in the appearance of the northern light”. In other words, he anticipated the current consensus view that the geomagnetic field is predominantly caused by iron in the earth’s core, but modified slightly by magnetic fields in the solar wind.

With hindsight, much of von Reichenbach’s experimentation simply represents early work on electrical glow discharges, including corona discharges. Some of his observations on the Odic force in living organisms prefigure the findings of Robert Becker and other bioelectromagnetists by more than a century. ‘Od’ though it may sound, the arcane force may just equate to plasma – unknown at the time, with the single exception of the “radiant matter” evinced by Faraday in 1816. Although it may take brass balls to concede this, despite his Mesmerist proclivities and mystifying vocabulary von Reichenbach qualifies as a respectable pioneer of plasma physics – and of plasma cosmology.

Apart from the bright, coloured round patches above the two poles which resembled the auroral ovals, several observations on von Reichenbach’s terrellae are worth singling out. A first remarkable morphology is that of vertical columns above the poles. Both “at the top and bottom of the globe”, one witness “discerned flames, two or three inches broad, radiating from the polar points, – and then, to use her own expression, spreading like an open parasol over the globe, concentric with it, both above and below, but a little distance from its surface.” According to a second ‘sensitive’ participant, the light emerging from the poles formed “from them great stars, with apparently innumerable points, or rather radiant thread-like prolongations, running over the globe, towards the equator, in various colors …” She “compared the whole flame to a loosely-bound sheaf of corn, standing upright on the ground with the ears and stalks hanging over in curves all round, so as to lie horizontally upon one another over the band.” To a third lady, the continuous “luminosity of the surface of the globe” resolved itself into “innumerable clearly distinguishable filaments, which seemed … about one-twenty-fifth of an inch thick (the size of a knitting needle), and ran from the blue and red patches of the upper and lower poles perpendicularly towards the equatorial band”:

“She described these filaments as not so much independent isolated streaks, as rather merely lines of greater intensity of light, alternating with fainter lines, so as to give a streaked appearance to the whole as if it were made up of threads running down from the poles. They were all of the colors corresponding to the points of the compass toward which they were directed …”

This woman, too, noticed how the coloured patches at the poles “became subdivided, and changed into filaments running downwards over the succeeding zones, which gave the polar patches a star-like aspect”, “apparent projections and hollows, presenting to eye [sic] the form of a kind of star.”

An observer in another experiment reported “short luminous columns flowing out as a kind of vapor from both poles, reddish at the positive and blue at the negative”: “The columns or stalks of light, as she called them, spread out above and turned over. She compared them with the form of a palm-tree, when the leaves spread out in all directions at right angles to the stem.” Another witness on the same occasion resorted to the metaphor of a tree as well, as she “perceived the globe to be streaked all over, from top to bottom”:

“The colored streaks were about of a hand’s breadth where they passed over the equator, and were separated from each other by opaque, indistinct, transitional streaks of the same breadth, in which the colors were blended together. She saw a mass of light above, which she also described as resembling a tree with the stem ascending from the pole, and the branches, separating each other, and overhanging on all sides.”

Another person, too, “saw streams of light issuing from the top and bottom; that is, the two poles of the globe, spreading out on all sides like the branches of a tree.” The baron concluded with respect to these “colored meridians running from pole to pole”:

“A flame flowed out from each pole, perpendicularly to the surface of the globe, upwards of two inches in height and about an inch and a half thick, which then expanded and overspread all sides of the globe parallel to its surface, became broken up into rays and streaks, and flowed out at once into the air in filaments of odic flame … The streaks of flame were not steady, but flickered and scintillated constantly backwards and forwards, becoming shorter and longer, and shooting out in rays … flaming light exists over the poles of the magnet … this flaming appearance occurs mobile, undulating, frequently serpentine, like rolls of riband blown about by the wind; often varying in size from larger to smaller, shooting out rays, scintillating, variegated in color, and also in the form of vapor …”

“Their poles emit .. delicate light visible only in the darkness of night. High above both poles it turns over and flows on all sides towards the tropical zones, broken up into filaments and rays on the great terrestrial globe as on the little terrelle …”

An all-encompassing shell of light around the terrella constituted a second type of formation. One attendant beheld “a delicate grey misty envelope all over the ball, most distinctly to be discerned in profile, and rising about two-fifths of an inch above the surface”. Von Reichenbach called this “a thin envelope of luminous vapor, a kind of delicate photosphere, or atmosphere of light, surrounding it”, consisting of “an opaque veil of light, not in contact with the surface, but at a little distance from it, and floating freely in the air above it, like a spherical shell.”

A final significant structure appearing on von Reichenbach’s terrellae was a radiant equatorial girdle. This was described by one viewer as “a more luminous, narrow and whitish-yellow ring running all round at the equator.” Another reported that “the equator itself formed a narrow, rather brighter band round the globe.” A third also “perceived the band which runs round the globe at the equator”, “a luminous streak, passing horizontally round at the greatest circumference, and thus dividing the globe into two halves, upper and lower”, which “has countless strong short teeth, like a fine comb, at right angles to the equator, and therefore pointing to the poles”.

Wrapping up, the various luminous forms on von Reichenbach’s terrellae were reported with remarkable consistency and match those on Birkeland’s terrellae pattern for pattern, even though they anteceded them by about half a century. The morphologies are readily understood as the magnetic field line pattern – notably the polar funnels – of a dipole field, a fully ionised sphere – or ‘ionosphere’ – around a solid globe and an equatorial ring current. The fine filamentary structure observed by ‘sensitives’ is characteristic of plasma. This foreshadowing of Birkeland’s results and modern geophysical understanding should dispel the tacit consensus that von Reichenbach’s observations were all balls.

If some of the plasma structures produced on terrellae are serviceable models of the earth’s polar aurorae, could other, more puzzling configurations teach valuable information about possible extreme conditions which may accompany geomagnetic crisis? Could the likes of polar columns and ‘stars’, a planet-wide ‘veil’ and a visible ring current around the equator arise at turbulent times when the earth’s protective magnetic shield fails, the currents conducted through the upper atmosphere short out or a solar wind orders of magnitude stronger than usual buffets the earth?

Stepping up speculation even further, have prehistoric humans around the globe perhaps witnessed such astonishing events? The spontaneous metaphorical descriptions volunteered by von Reichenbach’s guests are strongly reminiscent of the mythological language of axes mundi or ‘cosmic axes’: a parasol, a sheaf of corn, a tree with extensive canopy, serpents. Birkeland employed like similes. This supports the argument that such myths could have been based on the appearance of enhanced aurorae involving, concurrently or at various times, an extremely elevated degree of atmospheric ionisation, a visible equatorial ring current and visible plasma filaments aligned with the polar funnels and sometimes even the meridians of lower latitudes.

Absent the aid of a crystal ball to gaze directly into the past or future, the only way to find out may be to keep the ball rolling on a veritable Od-yssey of unprejudiced research in real and space laboratories alike.