Home Picture of the Day Fear and Panic 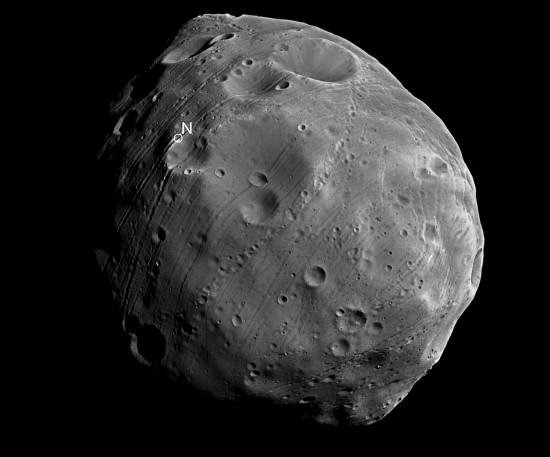 The two moons of Mars will soon receive a visitor.

According to a recent press release, the Japan Aerospace Exploration Agency (JAXA) plans to launch a probe to the enigmatic Martian moons, Phobos and Deimos. It is hoped that the newly minted mission will return samples of each moon back to Earth.

The last time a spacecraft was scheduled to visit the Martian moons was the ill-fated Phobos-Grunt. It was to observe Phobos and its environment from orbit, as well as place a lander on the surface that would bring samples back to Earth. A Chinese-made orbiter (Yinghuo-1) also flew with Phobos-Grunt. Launched in November 2011, its escape path to Mars failed, contact was lost, and it subsequently burned-up in the atmosphere on January 15, 2012.

Phobos is the largest of the two moons of Mars. Deimos is so small that it is a problem for astronomers because it cannot be easily observed from Earth. Only the Viking 2 orbiter, and more recently, the HiRise camera onboard the Mars Reconnaissance Orbiter captured close up images. Phobos, on the other hand, has been examined by Earth stations and by satellites sent to Mars orbit.

Stickney crater is a ten kilometer-wide excavation that is nearly the size of Phobos itself. In previous Pictures of the Day, rocky bodies with over-sized craters were pointed out. The “impacts” that left such comparatively enormous craters craters should have blasted the objects into fragments, but little sign of the collisions is visible other than the craters. In the case of Phobos, it is 28 by 20 kilometers in size, so Stickney crater is nearly half as large.

Some astronomers report that the striations and fracture lines evident around Stickney demonstrate that the moon did undergo severe shock, and that it was distorted by the impact of whatever formed the crater. However, on closer examination, the striations are revealed as chains of small craters, not “fracture lines” as if from a shockwave passing through the moon’s body. The area around the crater is blunted and smooth, with no large breccias, although the moon is covered with almost a meter of ultra-fine dust.

Phobos is similar in size to some asteroids such as Mathilde, Eros and Ida. It exhibits features, such as the aforementioned gigantic craters, that are endemic to those bodies. What is the common event that created such similar structures without obliterating the objects in the first place? The answer is electricity.

The theory of Mars immersed in a plasma flame sufficiently large to gouge out Valles Marineris, Olympus Mons and Arabia Terra in a relatively short period is the topic of many past Pictures of the Day. Gigatons of rock and dust were ejected from the planet and thrown into space at escape velocity. Blocks of stone as large as Manhattan Island appear as if they then fell from a great height and shattered on impact, leaving fields of enormous boulders with sharp, angular edges, covering thousands of square kilometers. Could it be that Phobos, Deimos, Ida and the rest are also the remnants of that overwhelming cataclysm?

In a possible scenario, the thunderbolts that carved up Mars threw big chunks of its crust into orbit, as well as into long ellipses around the Sun. While ramming through the electric fields involved with that process, they were smoothed and eroded by plasma discharge events at varying potential. For example, touchdown points drilled-in where the discharges were more intense. The result is that Phobos and the asteroids mentioned are covered in dust, have little or no large boulders, are defined by huge craters, and look like they’re half-melted.