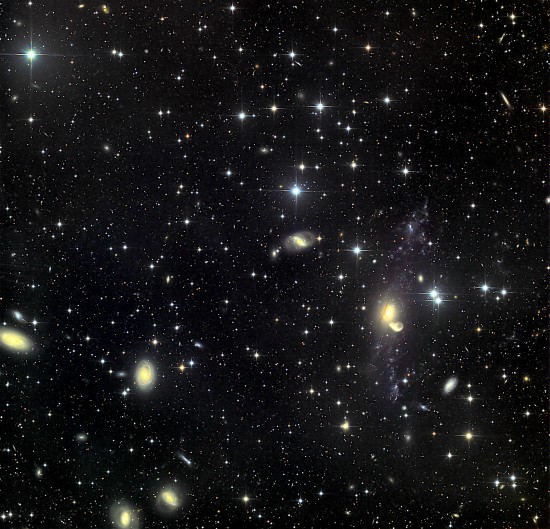 According to a recent press release, NGC 5291 in the constellation Centaurus, was involved in a “collision” with another galaxy billions of years ago, causing a ring to form. The ring then evolved into star-forming regions, as well as dwarf galaxies like NGC 5291N. All large galaxies are thought to be the result of smaller dwarf galaxies combining in the early Universe. Conventional studies by astronomers see dwarf galaxies as “survivors” from galactic consumption, with many “old stars”.

However, there are no old stars in NGC 5291N. “…the galaxy had properties typically associated with the formation of new stars, but what was observed is not predicted by current theoretical models…”

What causes the compact clumps of stars to form? One proposal is that “tidal forces” pulled stars and gas out from NGC 5291 as another galaxy passed close by. However, no theory is able to accommodate the characteristics of the stars and the knotted gas whose temperatures exceed tens of million Kelvin.

Since the beginning of advanced astronomy, conventional theorists have relied on gravity and acceleration for the production of gamma rays, X-rays and extreme ultraviolet light in space. Hydrogen gas compression is supposed to create enough transfer of momentum that it reaches temperatures greater than the cores of some stars. In other words, conventionally, it is the high temperature of the gas that makes it glow so brightly.

In previous Picture of the Day articles, it was noted that some galaxies look “hairy” with threads of material extending from them. Those filaments are Birkeland currents, but they only represent the visible portion of the circuit. The rest of the circuit generates magnetic fields that can be mapped, so the map will indicate the extent of the circuit. Every element in a galactic circuit radiates energy, and it must be powered by its coupling with larger circuits. The extent of those larger circuits is indicated by the observation that galaxies occur in strings.

Filamentary knots exploding outward from NGC 5291 are another example of electricity in space forming glowing “fireballs” of plasma. Winston Bostick, a plasma science pioneer, who worked with laboratory-scale plasmoid experiments and the construction of a dense-plasma focus device, contributed to astrophysics by arguing that galaxies mature from initial quasi-stellar (QUASAR) conglomerations of plasma.

Bostick believed that the Universe is a continuous process of electric charge flow through plasma, so his analysis of galactic behavior was based on electricity. Against the background of magnetic fields, electricity flows in the form of dark mode cosmic Birkeland current filaments. The induced rotation of Birkeland current pairs, where they intersect, is responsible for the formation and rotation of galactic disks.

Stars form along filaments of electric charge that flow through, into, and out of galaxies. Studies of galactic magnetic fields show that the same process takes place to a greater or lesser extent in every galaxy. A recent Picture of the Day discussed the Milky Way’s dwarf galaxies. It was noted that theories of galactic evolution suggest there should be far more of them than there actually are.

Another phenomenon that is difficult for conventional astronomers to explain is concentrations of stars in spherical orbits surrounding the nuclei of many galaxies. Globular clusters could be thought of as small-scale galactic nuclei, an idea that fits well with Arp’s observation that galactic nuclei eject core material that subsequently evolves into companion galaxies. Perhaps globular clusters are “seeds” flung out of galactic cores: “mini galaxies” born in the more dense star-forming regions of parent galaxies.

Galaxies are also part of clusters that, in turn, are part of superclusters. It is apparent that galaxies occur in strings within the clusters. Since galaxies are also a manifestation of Birkeland currents creating Bennett pinches along their multi-million light-year lengths, it would be no surprise to find them splitting into two or more “daughter” galaxies in order to accommodate increases in electric flux.

Perhaps what are conventionally interpreted to be galactic collisions are actually galaxies dividing. Since galaxies move so slowly, taking thousands or millions of years to change position, astronomers might be seeing the cart before the horse, and mistaking the direction of movement in their observations.