Home Picture of the Day Velikovsky the Unsung Genius 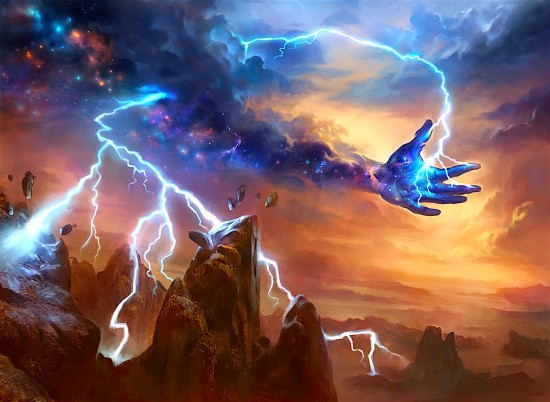 Immanuel Velikovsky was a man who still causes incredible controversy.

In the 1950s, Immanuel Velikovsky wrote a book called, “Worlds in Collision”, which, as its main theme, illuminated cataclysmic destruction on Earth by planets and comets in the Solar System. He believed mythology and legend should be interpreted literally.

This literal interpretation included the malignant forces attributed to Baal/Jupiter, father of the gods. He earned the wrath of the scientific world, yet most of his predictions made in 1960 were proved correct by NASA. For example, Jupiter emits radio waves and is an electromagnetic body. He also predicted that the surface of Venus was 800 degrees centigrade, and is completely unlike Earth. He claimed the Solar System is unstable, since both the Moon and Mars appear to have been ravaged by celestial forces attributed to planetary bodies. As part of his theory, he thought that Venus was once a comet expelled from Jupiter.

Immanuel Velikovsky sought proof of the unstable Solar System from many sources, since his discovery that mythology had bones of truth! Hesiod the ancient Greek philosopher portrayed this in his book, Theogony where, for instance, he cites Venus being ejected from Jupiter. Homer in his book The Illiad describes the destructive war between planets as the major factor governing the destruction of Troy in the Trojan wars. Immanuel Velikovsky in Worlds in Collision proposed that many myths and traditions of ancient peoples and cultures are based on actual events: worldwide global catastrophes of a celestial origin actually had profound effects on the lives, beliefs and writings of early mankind.

“Worlds in Collision is a book of wars in the celestial sphere that took place in historical times. In these wars the planet Earth participated too. The historical-cosmological story of this book is based on the evidence of historical texts of many people around the globe, on classical literature, on epics of the northern races, on sacred books of the peoples of the Orient and Occident, on traditions and folklore of primitive peoples, on old astronomical inscriptions and charts, on archaeological finds, and also on geological and paleontological material.”

After reaching the number one spot in the best-sellers list, Velikovsky’s “Worlds in Collision” was banned from a number of academic institutions, and created an unprecedented scientific debacle that became known as “The Velikovsky Affair”. In 1956 Velikovsky wrote a sequel, “Earth in Upheaval”, which presented conclusive geological evidence of terrestrial catastrophism.

“I have excluded from [these pages] all references to ancient literature, traditions, and folklore; and this I have done with intent, so that careless critics cannot decry the entire work as ‘tales and legends’. Stones and bones are the only witness.”

However, for forty years these highly controversial theories remained anathema to the academic world. Then, in June 1994, an event occurred that radically changed scientific thought and gave credibility to Velikovsky’s theories. Myth and legend, once dismissed, had to be re-examined. What was this catastrophic event?

A rogue comet, Shoemaker-Levy 9, approached Jupiter. Observers on Earth soon realized that it was on a collision course. But what happened next was totally unexpected. Without warning it split into twenty three large pieces. One-by-one those pieces plummeted into Jupiter, the largest planet in the Solar System. It tore huge craters into this massive planet; the size of each crater was four times the size of Earth. The craters persisted for months afterwards on the unstable surface of Jupiter. Simultaneously, a gaseous cloud was released that went on to envelope the surface of the planet. This toxic cloud also persisted for months.

For the first time, modern man had witnessed a comet collide with a planet! What was thought to be stable Solar System, was now a place where the unexpected could happen. Could this have occurred on Earth? Had mankind actually witnessed such an event? Could it happen to Earth in the future? No one could now deny any of these possibilities. Perhaps Baal, alias Jupiter and other planets have had dramatic effects on Earth. The proof is not final, but no longer is it a wild heretical theory based on fantasy. Velikovsky could be taken seriously.

Let’s talk with physicist Wal Thornhill regarding Immanuel Velikovsky and the development of the Electric Universe.

Peter Mungo Jupp: As a plasma physicist what is your view on Velikovsky’s books.

Wal Thornhill: I think he nailed some important truths. Certainly I think he nailed the planets as the cause of cataclysmic events on Earth. But as importantly he perceived the truth of the electrical universe which touches on all parts of the Solar System down to mankind’s history and evolution. Modern research is now revealing the dramatic electronic connection between volcanoes, Earthquakes, the weather and the sun. This research at the plasma level offers a tool to understanding those calamities that devastated mankind in his early history.

Peter Mungo Jupp: So, do we have evidence of electric discharges between Earth and other planets or comets? If we do, were they connected to massive Earthquake damage and electrical resculporting of the Earth?

Wal Thornhill: What happens on Earth today is but a tame shadow of mankind’s earlier history. The evidence suggests that only a few thousand years ago planets moved close to Earth, producing electrical phenomena of intense beauty and terror. Ancient sky worshippers witnessed these celestial wonders and far-flung cultures recorded the events in great myths, symbols and ritual practices of antiquity. I think they witnessed celestial bodies immersed in the charged particles of the Solar System’s dense plasma. These bodies, including Earth, spoke electrically to each other and produced heaven spanning electrical discharges. These planets were the gods. Mankind at once feared and worshipped them. During chaotic restructuring of the Solar System cosmic lightning evolved violently from one discharge configuration to another. They followed patterns observed in high energy plasma experiments. These electric phenomena have also been recently observed in deep space.

Peter Mungo Jupp: Wal, you say mankind witnessed these cosmic displays. What evidence do we have for that?

Wal Thornhill: Throughout the world our early ancestors carved pictures of these electric formations upon rocks. They bear a close similarity to each other whether from the Americas, Australia, Europe or Asia. In their myths they called them, “Thunderbolts of the gods”. More incredibly, they bear a remarkable resemblance to plasma discharges produced in laboratories or on super computer modelling.

Peter Mungo Jupp: This seems to fly in the face of conventional interpretations of mythology. Why the resistance to these ideas?

Wal Thornhill: I think for two reasons. Firstly, the idea of a Solar System that is electrically driven flies directly in the face of conventional cosmology. This is firmly bound up in a gravitational model even though NASA, day by day reveals facts that cannot be explained by gravity alone. Cosmology is the “Queen of the Sciences”, yet electrical theory and plasma science is rarely touched on by its disciples. Physicists and electronic scientists are familiar with the force of electricity which is a billion, billion, billion times stronger than gravity. Cosmologists need to radically rethink their gravitational bias. Secondly, I believe the doctrine of uniformitarianism is universally preached in many of the scientific disciplines. That is, by and large, nothing has occurred on Earth that doesn’t occur today. Slow gradual change is the rule. In particular, this dogma holds that the Solar System has been stable for millions of years and has barely changed. I believe this is totally incorrect. A mere look at the changing universe as NASA witnesses it today makes us aware that the stars are continually evolving and responding to an electrical universe.

Peter Mungo Jupp: So much of Mythology and the ancient destructions start to make sense when we interpret them with the aid of the Electrical Universe model.

See the video at Mungoflix.com