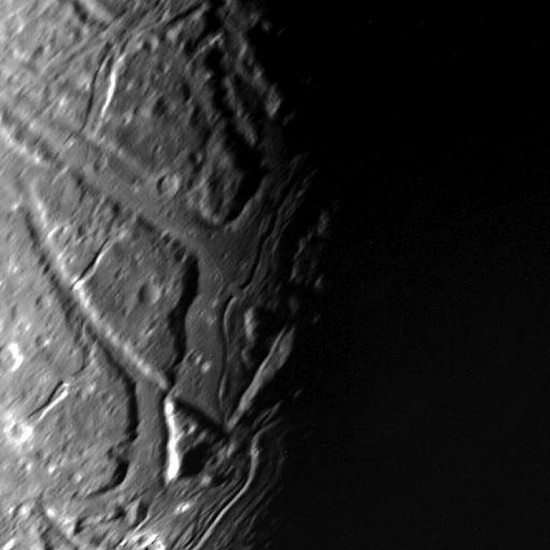 The surface of Ariel from Voyager 2. Credit: NASA/JPL/MSSS

Another moon with unmistakable signs of electric discharge impacts.

The moon Ariel is pockmarked with craters ranging from five to ten kilometers across—almost undetectable in the image above—however, a few craters measuring 20-30 kilometers across are visible. The crater dimensions might seem small, but considering Ariel’s equatorial diameter of 1160 kilometers they are comparatively large.

NASA launched the Voyager 2 spacecraft on August 20, 1977, sending it on a twelve-year mission to explore the outer planets. Voyager 2 crossed the termination shock marking the edge of the Solar System on July 10, 2008, and is now considered to be an interstellar spacecraft. During its closest approach to Uranus in January 1986, Voyager 2 recorded several images of the giant planet’s family of moons and found them to be scenes of cataclysmic devastation, with giant craters, wide and deep valleys, and long, sinuous cracks, or rilles extending for hundreds of kilometers.

Among those ravaged bodies is Ariel, whose surface features resemble those found on many moons in the Saturnian system. Ariel was discovered by William Lassell on October 24, 1851. The moons of Uranus were named for characters in Shakespeare’s plays, and “Ariel” was selected by Sir John Herschel at William Lassell’s request.

Planetary scientists propose that Ariel has been the scene of intense geologic activity in the past several million (if not billion) years. The rilles and offset slip faults are said to have been caused by slow crustal movements similar to those which are theorized to cause earthquakes. This process requires that Ariel was born long ago, along with its parent and siblings, from a primordial nebular cloud.

The parochial nature of scientific theories demands that the forces experienced on Earth are to be used as models for the formations observed elsewhere and that eons of time are necessary for them to mature. However, the Electric Universe theory states that the idea should be turned on its head: structures seen in space should be used as models for what is found on Earth. Since similar patterns are observed wherever instruments are focused, a reasonable hypothesis would demonstrate how airless, frozen bodies hovering near temperatures close to absolute zero can compare to hot, wet planets.

Of all the cosmic forces under consideration in consensus scientific reports about the Universe, electricity is given little credence. Heating a solid, or cracking it, is nothing when compared to energizing it with a multi-trillion joule proton beam.

How does the electric force manifest itself? Remarkable examples are the bright-edged rifts to the left of the central scar, as well as the hard-edged craters. How can the detonation of a colliding rock cause a polygonal crater? No experiment has been able to demonstrate a polygonal shape left behind after an explosive event. Explosions (such as that from a meteor impact) do not aggregate constituent particles into stable configurations; they induce chaotic behavior that leaves little in the way of identifiable forms.

As has been pointed-out in several previous Picture of the Day articles, polygons are created when intense particle beams touch down on a solid surface. Beams of electricity flowing through plasma create a central column surrounded by concentric cylinders. The cylindrical current filaments exhibit long-range attraction and short-range repulsion braiding that result in evenly spaced vortices surrounding the column. As the filaments rotate around one another, a preferred hexagonal cross-section forms within the innermost column.

The steep-walled scarps crossing Ariel are reminiscent of those on Saturn’s moons Enceladus, Tethys, and Dione, or Jupiter’s moon Europa, or Hadley Rille on the Moon. It could also be said that the great Rift Valley on Earth shares some characteristics with the long chasms that span other worlds. Enceladus, Mars, Mercury, Ganymede: these and many others compare to the morphology of Ariel.

Size is not important; mineralogical composition is not important; temperature or distance from the Sun are not important; what is important are the electric currents flowing through space and their interactions with clouds of plasma. Lightning bolts of immense size and power can be generated that are capable of incinerating any matter, or tearing it to pieces in electrodynamic vises.