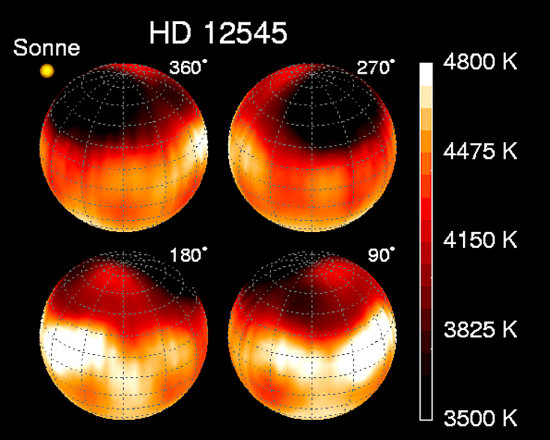 A star with a spot out of proportion to its size.

According to a recent publication, “starspots” are seen on the surface of XX Trianguli, otherwise known as HD 12545. The puzzling aspect is that there is only one spot visible and it covers almost one-third of its surface.

HD 12545 is thought to be a large star, over twice the mass of the Sun and ten times greater in diameter. Using Doppler shift analysis of the star’s spectrum, astronomers think that they have resolved its rotational velocity. Since the star’s rotation toward an observer is thought to shift its light curve into the blue end of the spectrum, and rotation away from an observer shifts it into the red, astronomers believe that they observe variations in those shifts, indicating to them that there is a “cool area” on the stellar disk.

From an Electric Universe perspective, sunspot filaments indicate that they are charge vortices. Looking down into a sunspot means seeing the rotating discharge columns in profile. Electric discharges in plasma form rope-like, hollow tendrils. Since they are funnels of plasma, their centers are darker, where convection cells would appear darker at their edges. Standard theory does not accept that the darker and cooler regions revealed by sunspots means that the Sun, as well as other stars, are cooler in their interiors.

What does such an extremely large starspot mean when analyzed from the Electric Star theory? As a previous Picture of the Day argues, stars shine because electricity flows through each galaxy. Stars can be thought of as (relatively) slow-motion lightning. It is this simple understanding that best matches observational evidence. Retired Professor of Electrical Engineering Donald Scott wrote in his acclaimed book The Electric Sky that a star’s size, luminosity, and color have little to do with its age.

Stars on the Hertzsprung-Russell diagram are not there based on a conventional model of stellar evolution, they receive input from galactic electrical circuits. As Dr. Scott wrote, the primary indicator for a star’s behavior is current density at its surface. Stars do not rely on internally generated fusion fires to supply them with energy.

Physicist and Electric Universe advocate Wal Thornhill also proposes an electrical model for stars. Electric currents in space are primarily due to the flow of electrons through interstellar plasma, and not the movement of positive ions. This means that stars are lacking in electrons because of a charge separation process. Stars can be considered “positive anodes” in a galactic glow discharge.

Since HD 12545 is an electric star, the dark region is where electric charge is flowing with the least amperage.

Most of the information available from the consensus community is based on the idea of internally powered stars. If that were the case, breaks in their photospheres would show hotter and brighter material underneath, rather than cooler and darker.

As Wal Thornhill wrote: “HD 12545 strains the magnetic theory of starspots past breaking point. Where does all of the throttled heat flow go? If it is diverted around this colossal starspot, the edges should be much brighter than the rest of the star. The electric star model expects this kind of transition between a star like our Sun and a red giant like HD 12545…A red giant is a large anode so that “tufting” is not required to carry the current load…Starspots will be cooler because the power that drives the stellar electric discharge is being diverted. Starspots can be any size on an electric star.”