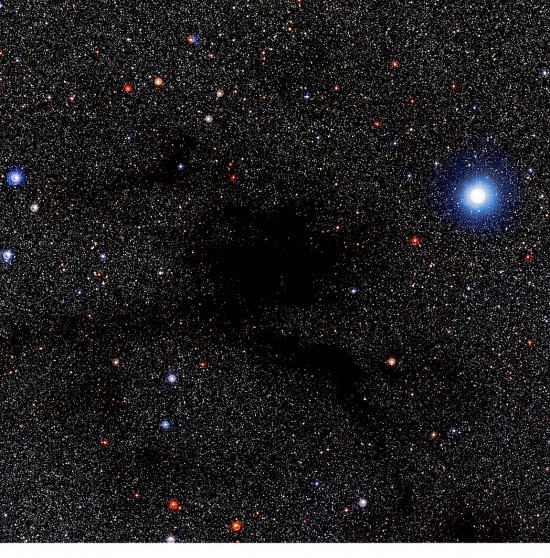 Lynds Dark Nebula 483 is located about 700 light-years away in the constellation of Serpens (The Serpent). Credit: ESO

An apparently empty patchwork of darkness strung across this field of stars is actually full—of dust and gas and Other Things.

The dust and gas doesn’t show up because there’s not sufficient light that we can see for it to reflect, and it isn’t hot enough to shine by itself. But it does shine in radio “light,” and radio telescopes have detected lumps in it. The Other Things are the things that theories and dreams and arguments are made of.

The theories and dreams that currently dominate the arguments imagine that the lumps are “baby stars…contracting under the force of gravity.” As they contract, the lumps heat up, soon get hot enough to initiate nuclear reactions, and then generate their own light.

Of course, no one has seen them do this. “Snapshots” of the various imagined stages are taken from various patches, dark and not so dark, and arranged in the hypothetical sequence. This “nebular hypothesis” was first imagined by Immanuel Kant and Pierre-Simon Laplace in the 18th century. It was popular for over 100 years. But difficulties explaining the distribution of angular momentum in the solar system finally led to its abandonment. Several different hypotheses were proposed, but they ran into the same difficulty.

The nebular hypothesis was readopted in the early 20th century for lack of being able to imagine anything else. Ad hoc adjustments were made; remaining difficulties were ignored; and the White Queen effect (willingness to believe six impossible things before breakfast) settled the matter: Beamish boys cut through the qualms with a vorpal blade of belief.

This basket of beliefs explained the handful of data until the new telescopes discovered extra-solar planets. Giant planets orbiting close to their primary stars overturned the basket. The ad hoc hypothesis machine was started again, and imagination—asking “what else could it be?”—was left to bleed out where the Red Queen had cut off its head.

Perhaps the most ignored feature of dark nebulae is their filamentary structure. Notice especially the dark line running from lower center to upper left in the image above, as well as the concentric arcs at lower right. The nebulae come not in “clouds” but in “lanes,” often in thin and constant-diameter lanes that zigzag over many light-years, like some kind of interstellar lightning. If astronomers knew anything about plasma phenomena (as distinguished from a priori theories deduced from ideal gas theory), they might imagine that the lanes were Birkeland currents. Instabilities in Birkeland currents are known to create condensations of matter—lumps. The electricity in them is known to generate light—and radio waves and x-rays.

But the Red Queen has declared that you can’t get charge separation in space, so anything electrical is forbidden. Imagination must find a dark patch to hide in for a while.