Home Picture of the Day Minerals on Mars 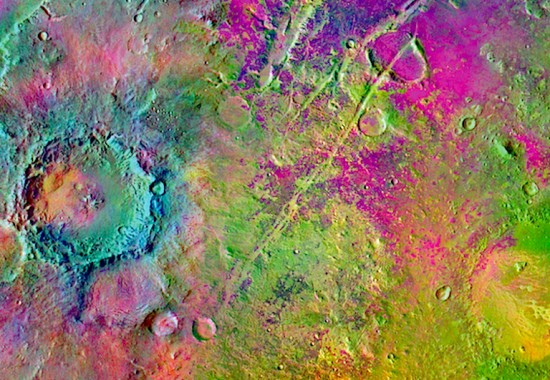 Extensive deposits of various compounds are found on Mars.

The idea that there might once have been liquid oceans on Mars has been bandied about for hundreds of years. The Mars Science Laboratory, known as Curiosity, was sent to Mars in order to look for signs of life that, presumably, existed in or near those bodies of water. Images from orbit seem to suggest that open water occupied great basins on the now frozen and barren planet. However, some publications cast doubt on that idea.

A paper published in the science journal, Geology, by researchers involved with the Mars Odyssey orbiter, revealed that beds of water-soluble minerals are far more extensive than previously thought. Despite its age—Odyssey was launched in 2001—data from its instruments was recently used to create the most detailed map of Mars yet conceived. Odyssey’s onboard infrared detectors also found that olivine is much more widely distributed in some of the “oldest” regions of Mars.

Olivine belongs to a class of minerals that possess distinctive olive-green coloration, a translucent luster, and a hardness greater than glass. Although it is identified by those common characteristics, geologists agree that there is no single mineral called olivine. Fayalite and forsterite, for example, are iron-rich and magnesium-rich, respectively, but can not easily be told apart. Even the primary iron and magnesium components vary in a single crystal, so they are collectively called “olivine”, mainly because of their olive-green color.

It is possible that olivine may be the most abundant mineral on Earth, since geological theories propose that it makes up the majority of Earth’s mantle. On the surface, they break down, or “weather”, quite easily. Iron and magnesium produced by the weathering of olivine is what makes volcanic soils very fertile. Since it is so easily destroyed by water, the presence of abundant olivine deposits on Mars implies a far drier environment than one that contained oceans of water.

Deep chasms, trenches, and ripples, as well as other structures on Mars, are thought to be the remains of water flowing on the surface, eroding it in the same way as water is believed to erode our planet. However, despite the contradictory evidence of mineral deposits that would be destroyed by water, such as olivine, the flowing water hypothesis continues to guide theories of Martian areology.

Electric Universe advocates propose that electric arcs and not water probably sculpted what can be seen on Mars. Valles Marineris, Olympus Mons, the vast 900 kilometer crater in Argyre Planitia, the terraced mounds in Arabia Terra, as well as both Martian poles demonstrate strong support for the electric discharge theory. In previous Picture of the Day articles, the conclusion was that the same powerful electric discharges on Mars could have transmuted silicon into iron and reformed silicon dioxide rock layers into the vast fields of hematite spherules that litter the landscape.

The mineralogical maps of Mars, along with topographic data, appear to give credence to the idea that Mars was once the scene of planet-wide plasma bombardment, and not a semi-tropical, bucolic idyll.