Home Picture of the Day And Yet They Move

And Yet They Move 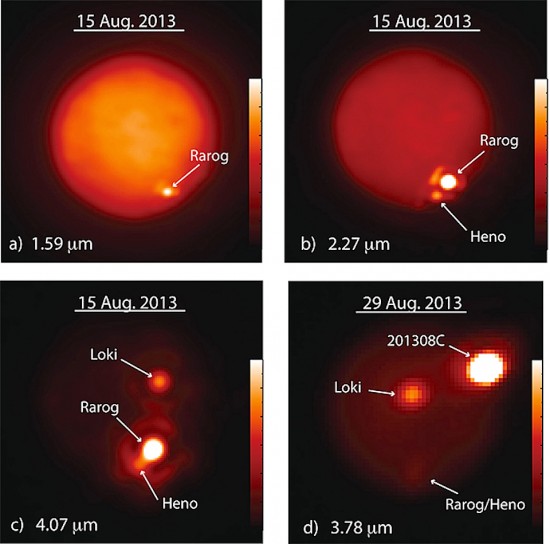 Io at different infrared wavelengths. The bar on the right of each image indicates the intensity of the infrared emission. Credit: Imke de Pater and Katherine de Kleer, UC Berkeley,

Previous Pictures of the Day discuss several confirmed predictions about electrical activity on Io, notably, the intense electric arcing between the moon and its parent body, Jupiter. Images of Io verify that Io ought to be considered from an electric discharge hypothesis, rather than the commonly accepted view. The majority of planetary scientists think that Io is being “kneaded” by tidal forces in Jupiter’s gravity field.

According to a recent press release, volcanoes (as those planetary scientists believe) are erupting on Io with larger and brighter plumes that ever before. Imke de Pater, from the University of California at Berkeley said:

“We typically expect one huge outburst every one or two years, and they’re usually not this bright. Here we had three extremely bright outbursts, which suggest that if we looked more frequently we might see many more of them on Io.”

Since Io is electrically connected to Jupiter, such variability is not unexpected in an Electric Universe. The most active regions are found along the edges of so-called “lava lakes,” while the remainder of the dark umbras surrounding them are extremely cold. No volcanic vents are seen. “Plumes” of erupting gas and dust move across Io, as illustrated by the Prometheus hot spot. However, that spot moved more than 80 kilometers since it was first imaged by Voyager 2. Galileo mission specialists were shocked when they realized that Io’s volcanic plumes also emit ultraviolet light, characteristic of electric arcs.

Images of the Tvashtar volcano near the north pole of Io reveal a volcanic plume, extending 290 kilometers above the surface. As NASA reported at the time:

“The remarkable filamentary structure in the Tvashtar plume is similar to details glimpsed faintly in 1979 Voyager images of a similar plume produced by Io’s volcano Pele. However, no previous image by any spacecraft has shown these mysterious structures so clearly.”

Most of Io’s hot spots appear to be located between 30 degrees and 60 degrees farther east than models of its internal heat profile predict, a recent article announced. Christopher Hamilton from the University of Maryland said:

“The unexpected eastward offset of the volcano locations is a clue that something is missing in our understanding of Io. In a way, that’s our most important result. Our understanding of tidal heat production and its relationship to surface volcanism is incomplete.”

From a conventional perspective, the filamentary structure of Io’s plumes will never be adequately explained. Nor will the anomalous movement of the caldera across its surface. Since Io and Jupiter are immersed in an electric field, and the induced charge flow between them dissipates more than 2 trillion watts, the electrical circuit on Io is concentrating the intense bombardment from Jupiter into several “plasma guns,” or dense plasma foci.

“The apparent filamentary penumbra on Io may be the first direct verification of the plasma gun mechanism at work in the solar system.”

The variability in the so-called volcanic eruptions is most likely another indication of the electrical connection between Jupiter and its moons.