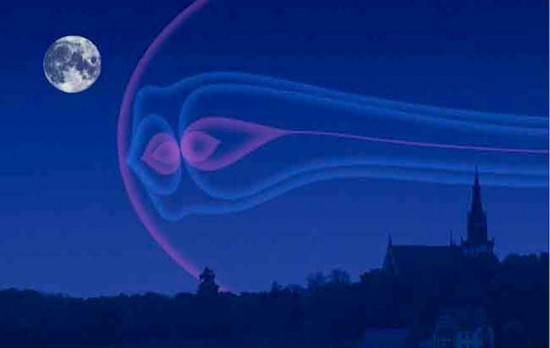 If Jupiter’s magnetosphere were in glow mode, it would be the largest structure visible in the night sky. Credit: NASA

Could two dynamos made of hydrogen create Jupiter’s magnetosphere?

Jupiter is the largest of all the planets. At 142,984 kilometers in diameter at its equator, it is so large that all the other planets could fit within its volume. Jupiter rotates so fast that a day lasts only 9.925 hours. That rapid rotational velocity means that its equatorial diameter is 9275 kilometers more than the distance between its poles.

Its magnetosphere extends outward for nearly 650 million kilometers, reaching beyond Saturn’s orbit. There are also bands of radiation, similar to the Van Allen radiation belts that surround Earth, except that the radiation emitted by Jupiter is thousands of times greater, and would be instantly fatal to any organism without heavy lead shielding.

The most energetic of the trapped electrons radiate at radio frequencies. In 1955 that plasma radiation led to the discovery that Jupiter had a magnetic field. It should be noted, however, that the maverick scientist, Immanuel Velikovsky, predicted Jupiter’s magnetic field in October of 1953.

According to a recent press release, scientists from the Max Planck Institute for Solar System Research in Göttingen created a computer model that they claim explains the origin of Jupiter’s magnetic field.

It is significant that the announcement states that, “magnetic fields are always generated when electric currents flow”. However, the conclusions are not those that Electric Universe advocates would propose.

It is commonly thought that Earth’s magnetic field is created by “a circulating molten mass of iron and nickel”. The rotating “dynamo” is said to generate electricity that, in turn, generates our planet’s dipolar magnetic field. Jupiter is made up of hydrogen and helium, so how a dynamo can generate electric fields has been a mystery ever since the discovery of its magnetosphere. As the new computer simulation reveals to mainstream physicists, Jupiter’s hydrogen is compressed into a metallic state that becomes conductive. Not only that, the new simulation, unlike previous, more simplistic models, indicates that another dynamo contributes. It is “brought about by a strong wind blowing towards the east, a so-called jet, which can be recognised from the cloud movements”.

The Galileo spacecraft discovered electric charges flowing around Jupiter, just as Electric Universe theorists predicted. As the moon Io revolves through Jupiter’s electromagnetic fields, electrical power greater than 2 trillion watts is dissipated between them. This electric current travels along Jupiter’s magnetic field, creating lightning in the planet’s upper atmosphere, as well as intense aurorae at the poles.

An electrical interaction between Jupiter and its moons means that they are charged bodies and not electrically neutral. Jupiter exists in a dynamic electrical relationship to the Sun, and it is now known that charged particles from the Sun and not “electric dynamos” power the planets. Contrary to iron core dynamos, rotating charged bodies produce dipolar electromagnetic fields, no matter if they are gas giants or rocky planets. Why some rocky bodies, like Earth, Mercury, and Ganymede possess magnetic fields, while Venus, Mars, and most moons do not demands further investigation. However, the basic physics of charged objects in motion generating electromagnetism is not debated.