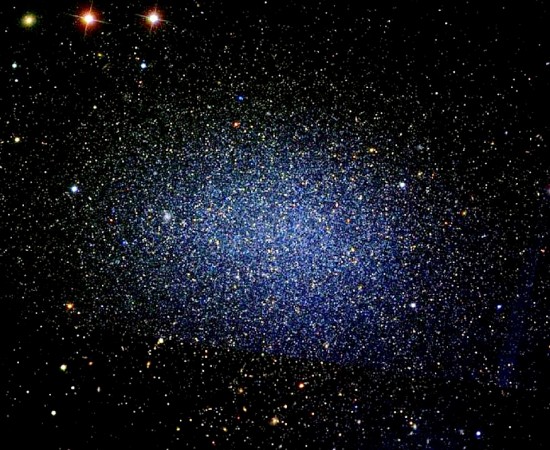 Lambda Cold Dark Matter theory (ΛCDM) gets its name from the idea that dark matter cannot be detected with any known instruments. The “lambda” indicates a dark energy component, since both are considered to be necessary to each other. Although there are many problems with the theory, cosmologists persist in using it to propose how far away things are, how old they are, and what they are made of. This is done in order to save the prevailing gravitational theory of the Universe.

Since dark matter does not emit electromagnetic radiation in any bandwidth from radio to gamma rays, the only means available to confirm its existence is to look for its gravitational effects on so-called “luminous matter.” As noted in past Picture of the Day articles, galactic rotation is considered anomalous by conventional astronomers, unless dark matter is added to a galaxy’s gravitational mass. The galaxies, themselves, are thought to require dark matter in order for them to maintain their structures. Without it, say astronomers, galaxies would fly apart, since there is too little observed matter for them to hold together.

The Milky Way galaxy does not travel alone, it is accompanied by dozens of smaller galaxies with a more diffuse and irregular structure. However, as conventional models suggest, there are too few dwarf companions in orbit, as well as issues with their locations. Instead of being distributed in a spherical shell, they lie in the same plane as the galactic disk.

According to a recent press release, that distribution does not fit the standard model of galactic evolution. As reported by the University of Swinburne, “…satellite dwarf galaxies in the Milky Way and Andromeda are expected to behave in a particular way; the galaxies would form in halos of dark matter, be widely distributed and would move in random directions.”

This latest information builds on previous observations about the Milky Way’s companions from the Royal Astronomical Society in 2012. In that study, astronomers reported a vast stream of dwarf galaxies and star clusters that stretch out around our galaxy for 1 million light-years (using conventional distance measurements). Both surveys are a sure sign that ΛCDM may be on its last legs.

Problems with conventional theories start at the beginning by assuming that galaxies are gravity-based structures that obey the laws of mechanics and momentum. In an Electric Universe, however, they are not “whirlpools of stars” that depend on a force that is extremely weak when compared to electromagnetism. Galaxies can be thought of as electrically active celestial bodies in which each star is the locus of charge flow. Electricity flowing through dusty plasma is responsible for the births of stars and galaxies. Such flows of electricity are commonly called Birkeland currents after their discoverer, Kristian Birkeland.

Electricity flows through a galaxy like the Milky Way along the polar axis and then out through the spiral arms. There is most likely a circuit across the galactic disk that divides, flowing upward and downward back into the poles. This circuit receives its driving power from Birkeland currents that connect the galaxy with the rest of the Universe where, presumably, billion-light-year long strands of magnetically confined electric filaments are transmitting power from one end of space to the other.

Since dwarf galaxies are also rotating in the galactic plane along with the ring, it seems logical to conclude that one force is acting on both. Electromagnetism, being substantially more powerful than gravity, causes the ring of stars and the dwarf galaxies to be aligned at right angles to the axial intergalactic magnetic field.