Home Picture of the Day Lightning in the Wind

Lightning in the Wind 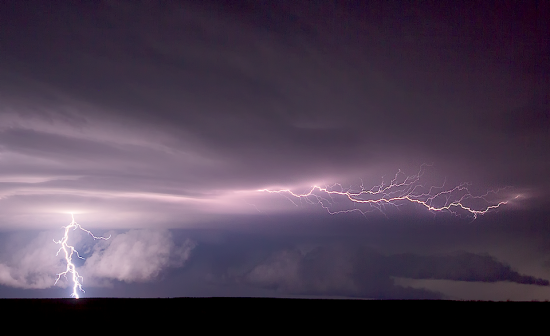 Ionized particles from the Sun contribute to electric discharges on Earth

Electric Universe theories propose that plasma discharge behavior is a better model for solar activity than most consensus opinions would like to accept. Experiments using a positively charged sphere show that a plasma torus forms above its equator. Charged plasma bridges the torus, coupling the sphere’s middle and lower latitudes, consistent with the principle of “anode tufting,” a plasma discharge effect expected from a positively charged electric Sun.

Sunspot filaments, seen clearly in sunspot penumbrae, indicate that they are rapidly rotating charge vortices. Electric discharges in plasma form rope-like, hollow tendrils, so looking down into a sunspot will reveal its rotating discharge columns in profile. Since they are funnels of plasma, their centers are darker, where convection cells would appear darker at their edges.

Since the Sun is the most powerful electrical entity in the Solar System, it stands to reason that its influence will extend outward as far as its heliospheric boundary. That influence, as previous Pictures of the Day argue, instigates many electrical phenomena on Earth.

A recent press release ignores the primary electrical aspect of the Sun, preferring to focus on magnetic reconnection as the major factor in the Sun’s impact on lightning generation. It is a step forward for heliophysicists and planetary scientists to acknowledge the Sun-Earth connection, but it is disappointing to see them rely on such a poorly supported theory like magnetic reconnection.

Briefly, according to the announcement, solar magnetic field lines “stretch between two points…twist and entangle”, forming magnetic flux ropes that snap, releasing enormous energy that blasts away from the Sun as a solar flare or a coronal mass ejection. The field lines then relax until the next energy build-up.

Electric discharges in plasma create tube-like magnetic sheaths along their axes. If enough electric charge flows, it will cause the sheath to glow, sometimes creating a number of other sheaths within it. The sheaths are called “double layers.” Powerful electric fields appear between regions in the double layers, which accelerate charged particles. Sometimes, the stored electrical energy will be catastrophically released in a “Langmuir burst.” Those bursts are what conventional astrophysicists incorrectly call “magnetic reconnection”.

It is a confirmed fact that the movement of electric charges in plasma forms electromagnetic fields that constrict the current. As previous Picture of the Day articles point out, the constricted channel is known as a “Bennett pinch,” or “z-pinch.” The pinched electric filaments remain coherent over long distances, forming helical structures that can transmit power through space. It is that phenomenon that scientists refer to as flux ropes. They are also known as Birkeland currents.

Electric fields freely accelerate charged particles, which move outward in opposite directions, activating an electric current that follows the Sun’s magnetic field. That field is carried into Earth’s electrical environment along gigantic Birkeland current filaments. It was reported elsewhere that in September 2002 a major premise of Electric Universe theory was confirmed: weather systems on Earth are electrically connected to a field of charged particles called the ionosphere. Dual bands of plasma shining in ultraviolet light were found by the IMAGE satellite. The plasma streams are circling the Earth in opposite directions along the equator, carrying positive and negative electric charges.

Along with that observation, the Time History of Events and Macroscale Interactions during Substorms (THEMIS) satellites found what were called “space tornadoes” (Birkeland currents), electrified plasma vortices rotating faster than 1,600,000 kilometers per hour, about 64,000 kilometers from Earth. The THEMIS satellites, together with Earth-based stations, verified that those charged plasma formations are connected to the ionosphere. This means that the Sun is directly coupled to lightning generators on Earth—otherwise called thunderstorms.

As previously written, the capacitor effect is probably what contributes to lightning discharges. Capacitors are usually made of two conductors separated by an insulating medium, or dielectric insulator. An electric charge on one conductor attracts an opposite charge to the other conductor, resulting in an electric field between them that acts as an electrical energy reserve. Thunderstorms are most likely behaving like capacitors: the clouds are one plate, the ground another, and the atmosphere is the dielectric insulator.

Since the clouds are connected to the ionosphere, electric charges carried into the ionosphere by the solar wind cause increases in the electrical energy in the clouds, which also increases the stored charge in the ground. That accumulated charge overcomes the atmosphere’s ability to keep the two separate, so they reach out to each other in the form of “leader strokes.” When the two lightning leaders meet, a circuit between the clouds and the ground (or between one cloud and another) is completed: lightning flashes.