Home Picture of the Day Life on Europa? 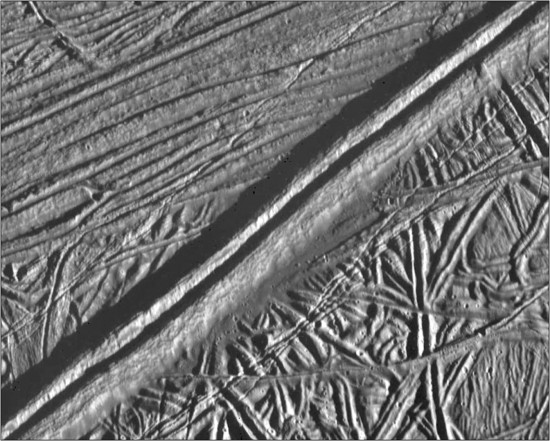 A mosaic of Europa from two pictures taken by the Galileo spacecraft on February 20, 1997. Credit: NASA/JPL.

The definition of “life” can be ambiguous.

The Galileo spacecraft was launched on October 18, 1989 from the Space Shuttle Atlantis, and subsequently entered orbit around Jupiter on December 7, 1995. After eight years in orbit, Galileo was deliberately incinerated by sending into the atmosphere of Jupiter on September 21, 2003. This was done to prevent any materials from its body accidentally contaminating Jupiter’s moons in an uncontrolled crash when its maneuvering thruster fuel ran out.

In the image at the top of the page, the surface of Europa was resolved by Galileo’s cameras from a distance of 2000 kilometers. The area shown is about 14 kilometers by 17 kilometers in Europa’s trailing hemisphere.

Europa is an extremely cold celestial body, with a mean temperature of −160 C at the equator and −220 C in its polar latitudes. At that temperature, water ice has a tensile strength equivalent to some of the hardest rocks on Earth.

According to a recent press release, planetary scientists speculate that, even though it is so cold, Europa might harbor some kind of life forms. They believe that beneath the ice-rock crust, the moon could have a relatively warm ocean. Conventional interpretations suggest that Europa’s heat comes from “tidal kneading”: Jupiter’s gravity is said to be stretching and compressing the moon, creating so much friction that the subsurface ice melts, creating small pockets of liquid water in lakes beneath the surface, above a salty ocean. It is in that “warm” ocean that life is thought to exist, although, according to NASA scientists: “Even the existence of a subsurface ocean, while strongly suspected, is not yet proven.”

What is “life” anyway? Life is said to move, grow, consume, require oxygen, give off waste and die. With this definition, fire can be thought of as life. In a stricter sense, life requires liquid water and a temperature range in which complex organic chemistry can take place. In order for life to exist on Europa, it must be able to fulfill those conditions, and more. Life is considered to be a process, rather than a state of being, so its definition will never be clear cut.

However, Galileo’s high resolution camera revealed smoothly cut channels that do not look like fractures. Their orientation disregards prior channels, sometimes with five or six of them stacked on top of each other at every angle. As electrical experiments in Dr. C. J. Ransom’s Vemasat Laboratories reveal, this should come as no surprise. Electric currents flowing across a conductive surface are “pinched” into thin filaments by their associated magnetic fields and draw other filaments into parallel alignment. The trackways often overlap each other.

When electric arcs strike a sphere, smaller, perpendicular side channels are created by corona discharges. Darkened, scorched areas, pits, curving channels that appear to be centered on Europa’s poles, and a lack of craters are all duplicated in Vemasat experiments. NASA’s surprises are expected by Electric Universe advocates because plasma behavior scales by many orders of magnitude. From the laboratory to the Solar System’s planets and moons, plasma is the primary ingredient that shapes worlds, not kinetic squeezing and stretching.

There is most likely no subsurface ocean on Europa, and the chaotic terrain seen by Galileo are surface features that do not result from interior processes.