Home Picture of the Day The Whichness of the Why

The Whichness of the Why 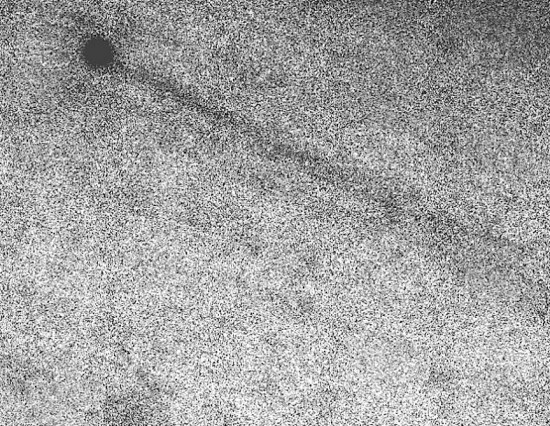 Another asteroid has been detected sporting a long tail.

Comets are often called “dirty snowballs” by astronomers. However, various investigative missions, such as Giotto and Deep Impact, revealed them to be blackened, cratered, and fractured. No ice fields, reflective crust, or watery clouds were observed. Indeed, the latest pictures from the Rosetta mission of 67P/Churyumov-Gerasimenko indicate that it is a mountain of rock in space.

According to a recent press release, the Gemini Observatory’s image of asteroid 62412, located between Mars and Jupiter, is the first time that one of the Hygiea family of asteroids has exhibited a tail, and is only the 13th “active” asteroid seen there. As the announcement states, why asteroids grow tails is unknown but, “… recent impacts or sublimation from solid to gas of exposed ices” are thought to be potential causes.

A previous Picture of the Day discussed asteroid 596 Scheila, which formed a large C-shaped coma. The Swift space-based observatory did not find water vapor thought to be “normally” associated with comets. Instead, two dusty plume-like tails trailed behind the asteroid, subsequently fading over the next several months.

Another Picture of the Day described several “Centaur objects” orbiting near the asteroid belt that demonstrate an indeterminate state between comet and asteroid. 2060 Chiron, for example, is now identified as both comet and asteroid, since it develops a coma whenever it reaches its closest approach to the Sun, although it does not grow a tail.

Further blurring the line between the two classes of celestial object, Comet Tempel 1 resembles an asteroid more than a chunk of muddy slush. Craters, boulders, and cliffs were observed by the Deep Impact mission. As previously written, Deep Space 1 flew by comet Borrelly in 2001, finding it hot and dry instead of cold and wet. Although the Rosetta mission’s Philae lander did not perform as expected, one thing it did manage to discover is that the surface of 67P/Churyumov-Gerasimenko is tough and hard, not fluffy and frangible.

Proponents of mainstream viewpoints are slowly beginning to realize that asteroids and comets exist in a continuum: neither are strictly identical nor completely different from the other. When the Stardust mission returned to Earth with samples from the coma of comet Wild 2, scientists found that the material looked more like meteoric dust than what was expected from a dirty snowball.

Whatever water or hydroxyl compounds found in cometary comas are probably created there, as Wal Thornhill has explained: ionized oxygen from comets reacts with hydrogen ions streaming out from the Sun. No jets of water vapor spew from comets, and no icy plains have ever been observed. It is electric effects that are seen. Discharges and arcs form the comet phenomena.

Intense electric fields in space most likely create comets. If an asteroid experiences something similar, such as an electromagnetic encounter with a gas giant’s plasmasphere, cometary activity could be said to be “expected”.