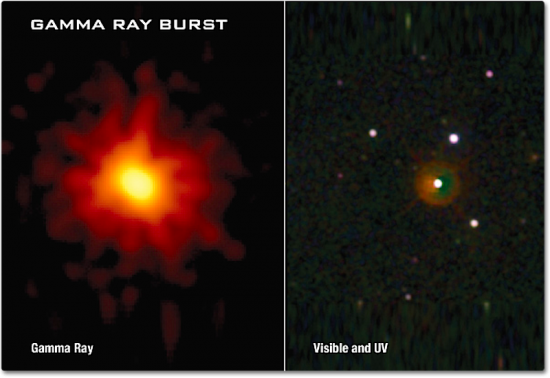 When charged particles are accelerated in an electric field, they emit synchrotron radiation that creates X-rays and gamma rays—something that has been demonstrated in laboratory experiments. Gamma rays are a class of theoretical “electromagnetic particles” called photons, which are said to exist as both waves and particles. Photons are “massless,” as astrophysicists define mass, but since they travel at enormous velocity (up to 2.993 x 10^10 centimeters per second), so-called “relativistic effects” come into play. That high velocity increases their inertia, enough for them to knock electrons out of an atom.

Since gamma rays are capable of penetrating the space between atoms, densely packed crystals make up gamma ray detectors, and when gamma rays ionize particles in the crystal matrix, the particles emit electrons through a process known as Compton scattering. It is the electrons that are seen and not the gamma rays, themselves.

According to a recent press release, astronomers monitoring the Swift satellite received a “burst alert“, indicating a gamma ray burst (GRB) had just occurred. Astrophysicists describe GRBs as the merging of neutron stars or the high frequency light radiating from powerful supernova explosions. However, researchers from the University of Leicester found this GRB was behaving “differently than previously thought”. As Dr. Klaas Wiersema from the Department of Physics and Astronomy wrote: “We believe that this detection means that most of the current theories of how electrons get accelerated in afterglows need re-examining.”

In the conventional view, the primary method for accelerating electrons is from the shockwaves propagating outward from supernovae. In other words, kinetic forces are imparted to electrons, “kicking them” into high velocity. After the initial impetus, GRBs are said to glow for some time in many light wavelengths, including visible and ultraviolet.

Wiersema measured the polarization of light from GRB 121024A, using the European Southern Observatory’s Very Large Telescope (VLT). They were “surprised” to find that light from the GRB’s afterglow was circularly polarized. When light waves travel in two planes but differ in phase by 90°, they are circularly polarized. Since “natural” light is not polarized, the finding was unexpected. The University of Leicester team concluded that the current theory of electron acceleration must be wrong.

The intensity of a GRB is thought to depend on its distance. The first few GRBs were found in galaxies with high redshift, indicating distances as great as 12 billion light years. If they were actually that far away, their energies would be greater than any supernova could create. As written elsewhere, a hypothetical cosmic entity known as a hypernova was imagined in an attempt at salvaging the redshift-indicates-distance theory.

However, as Electric Universe cosmologists postulate, another explanation for GRB intensity is that redshift is not actually an indicator of distance and GRBs are occurring in nearby galactic neighborhoods, so they are not unimaginably powerful, and not coming from the edge of a speculative expanding space-time continuum. If GRBs are located nearby, they are less energetic and plasma discharges in the form of exploding double layers could impel the gamma ray bursts in ways that can be explored though laboratory experiments. Rather than relying on mathematical phantoms like hypernovae, why not create real, testable hypotheses and work them up with real, physical models?

As has been noted in the past, Hannes Alfvén thought that the “exploding double layer” should be considered a new class of celestial object. Compression zones (z-pinches) in plasma filaments create plasmoids that evolve into stars and galaxies. Electricity is responsible for the birth of stars, and when the current density gets too high, the double layers in the circuit catastrophically release their excess energy, appearing as GRBs, X-rays, or flares of ultraviolet light.

“From what has been said it is obvious that astrophysics runs the risk of getting too speculative, unless it tries very hard to keep contact with laboratory physics. Indeed it is essential to stress that astrophysics is essentially an application to cosmic phenomena of the laws of nature found in the laboratory. From this follows that a particular field of astrophysics is not ripe for a scientific approach before experimental physics has reached a certain state of development.”
— Hannes Alfvén