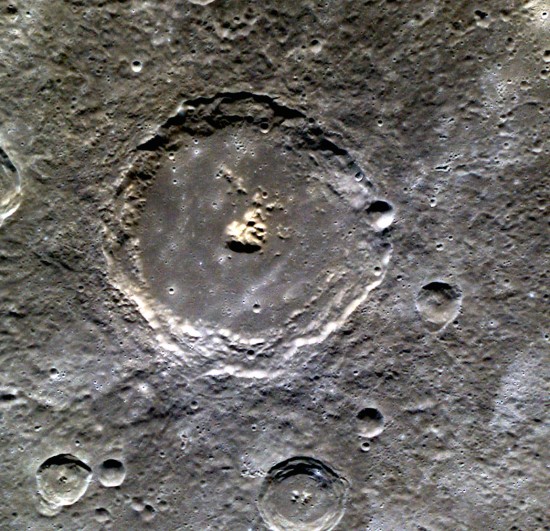 Could Mercury and the Moon be more closely related than previously thought?

On March 18, 2011 the MESSENGER spacecraft (Mercury Surface, Space Environment, Geochemistry and Ranging) entered orbit around the planet Mercury. The last time a spacecraft explored Mercury was Mariner 10 during its tour of it and Venus. Mariner 10 flew near Mercury in 1974 – March 29, September 21 and then again on March 16, 1975. However, because there was no orbital insertion, only about 45% of the surface was mapped by the onboard instruments. Because MESSENGER has been orbiting Mercury for more than three years, other mysteries about Mercury, unanswered for the last 34 years, might be answered.

Mercury is intriguing to space scientists because it provides them with a number of “processes that have yet to be understood”. Crater chains and melted pits extend from depressions that can be over 60 kilometers wide. Flat bottoms and vertical sidewalls are signs that they were created by electric arcs and not from meteor impacts on the surface.

Mercury’s story is probably one of extremes. Its surface is heavily scarred, with steep-walled canyons, scarps that rise up several kilometers, and craters that penetrate the crust for several kilometers below the mean elevation. The difference in elevation between lowlands and highlands exceeds eight kilometers in some regions. Mercury resembles the Moon more than any other rocky body. The Moon is 3475 kilometers in diameter, while Mercury is 4880 kilometers; it appears that they both experienced catastrophes at some time in the past that left them with nearly identical topography.

The surface of Mercury is usually said to be an example of meteorites bombardment. However, the signs of electricity in action are more prevalent than the signs of shockwaves through the strata. Most of the debris on the surface of Mercury appears to be chunks of fallback material that was blown out by the explosive energies of plasma discharges. Ordinarily, as in the image at the top of the page, the craters have little if any ejecta surrounding them. The crater field shown above is generally lacking in boulders or smaller breccias.

Mercury possesses a weak magnetic field, one with a surface strength about 1% of Earth. It is offset from the polar axis by almost 500 kilometers. Since Mercury’s radius is 2440 kilometers, that results in nearly a 20% radial offset. Although Mercury is thought to have a molten outer core, no one knows if it is working to generate its magnetic field like Earth or if the field is part of the crust, like Mars. No one understands why a molten core should even exist on Mercury, since the planet appears cold and dead. The molten interior should have cooled off eons ago.

Another theory suggests that Mercury’s slow rotation keeps the magnetic field in a weakened state. Mercury rotates in 59 Earth days, making it the planet with the slowest rotation next to Venus. It is more likely that the problematic “dynamo theory” of planetary magnetism is wrong. According to Electric Universe physicist Wal Thornhill, a slowly rotating charged body will produce a weak dipole magnetic field. A magnetometer on the satellite should help to resolve Mercury’s anomalous magnetic field conditions.

NASA scientists often refer to what they find on other planets as “mysterious”, with long years of research ahead. The reason for the confusion is one of reverse application: Earth should not be used to explain the Solar System. The geological patterns found elsewhere deserve alternative viewpoints.