Home Picture of the Day Aristarchus 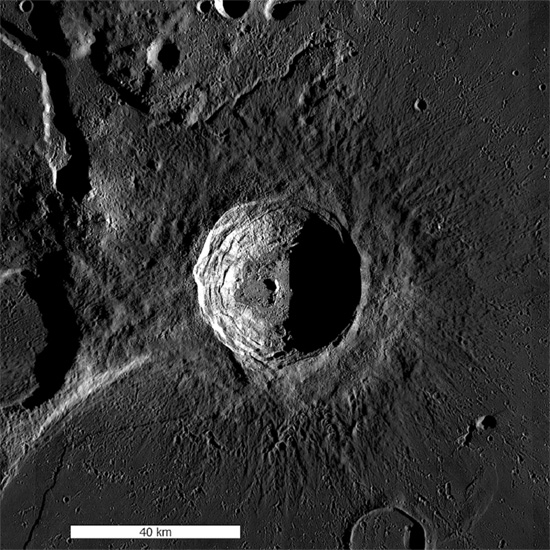 The Lunar Reconnaissance Orbiter is providing more evidence for the Electric Universe theory.

The Moon has intrigued humanity since the beginning. Where did it come from? What is it made of? Today, those questions remain unanswered, for the most part, although technological advancements have provided closer looks at its surface. The highest resolution images are coming from the Lunar Reconnaissance Orbiter (LRO) that was launched on June 18, 2009.

NASA launched the LRO/LCROSS mission to look for water on the Moon. The mission consisted of a Shepherding Spacecraft, a Centaur rocket, and the Lunar Reconnaissance Orbiter (LRO). The first two components crashed into the Moon’s south polar region, hoping to evaporate ice deposits and confirm the presence of water there. The LRO was sent into orbit, where its low altitude made the best of the onboard high-resolution digital imager.

The crater Aristarchus, one of the brightest features on the Moon, is shown above. It is located in the general vicinity of Schröter’s Valley, and is near another large crater called Herodotus. It is 40 kilometers wide and almost 4 kilometers deep. One of the more intriguing aspects of Aristarchus is the pointed edges on its rims. “Rims” is appropriate when referring to Aristarchus, since there are multiple rims inside the crater. They are most often called “terraces”.

Planetary scientists blithely insist that the terracing is due to “mass wasting”, or the down-slope movement of regolith. This would seem to be a reasonable assumption if not for the fact that there is no landslide debris on the crater floor. Instead, the crater floor is dominated by a high, sharp peak: note the long shadow cast by the pillar.

Associated with the crater is the Rimae Aristarchus, a network of sinuous rilles that run for hundreds of kilometers through the lunar landscape. Many of the narrow, deep chasms end in craters. Indeed, Schröter’s Valley terminates close to Herodotus in a large crater of its own. Closer inspection of the rilles indicates that they are composed of crater chains so closely spaced that they have excavated a canyon.

Aristarchus reveals many characteristics associated with electrical events. Its surroundings are peppered with melted craters, elongated craters, and crater chains. Again, selenologists prefer to think that those formations are due to “fallback ejecta” from the supposed high-velocity chunk of rock that created Aristarchus “millions of years ago.”

It is true that the Moon is an airless, waterless (probably), desiccated museum, preserving whatever happened to it in a kind of stasis. Since there is no erosion, whatever timeframe that fits a particular theory can be dropped onto it and, for the most part, it will fit. However, the central pillar in Aristarchus is sharp, flat, and narrow, belying the impact of a rocky body. There are braided Lichtenberg figures surrounding the crater, extending outward for a hundred kilometers.

If a conductive surface is negatively charged, a plasma arc will travel across it, eroding elongated craters. This electrical interpretation helps to explain the selenography of Aristarchus. Electromagnetic forces between Birkeland current filaments are constrained, so they are forced into alignment. Ionic winds from the arc-mode discharges lift material and carry it in the direction of the charge flow. This explains the “rays” sometimes associated with craters, not just on the Moon, but on all other mineralized bodies in the Solar System.

An interesting note is that there is no magnetosphere on the Moon, but some areas possess an “impressed” magnetic field. Since magnetism and electricity are two side of one coin, why is it puzzling when planetary scientists find anomalous magnetic signatures? Is it not reasonable to conclude that electric fields left behind remanent magnetic domains? If so, then there is evidence for an “electric crater” hypothesis.

The Electric Universe offers another perspective on observations. Several factors are not reported by conventional lunar observatories because their lexicons do not include electric arcs or traveling subterranean electric discharges as causative agents. Many possible explanations for craters exist, but when electrical forces are included, a new way of seeing the lunar landscape, and the rest of the Solar System, becomes possible.