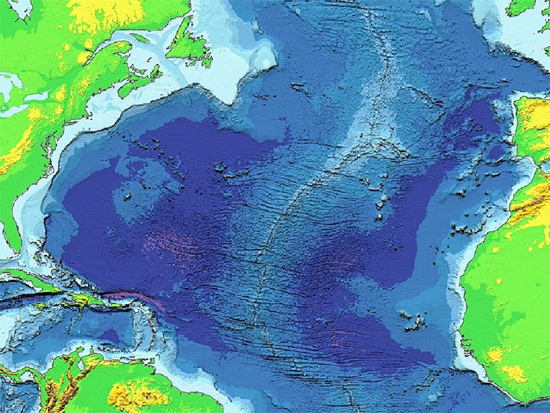 An elevation map of the Mid-Atlantic ridge. Credit: NOAA/USGS

Earth is said to emit heat energy because radioactive elements decay in its depths. Electrical activity might be a better explanation.

“Do not wait to strike till the iron is hot; but make it hot by striking.”
— William Butler Yeats

A recent press release asks what forces are powerful enough to spread the floors of Earth’s oceans and move the continents? Additionally, Earth’s core is supposed to be molten iron. What heat source has kept it hot for the billions of years that it has supposedly floated in the cold of space?

According to geologists, the heat from uranium, thorium, and potassium isotope decay is what powers Earth’s great engines. Bore hole temperature data from over 20,000 worldwide locations confirms an estimated heat flow in excess of 44 terawatts escaping Earth’s interior. However, it is now thought that only fifty percent of that loss is due to radioactive element decay.

Using the Kamioka Liquid-scintillator Anti-Neutrino Detector (KamLAND), scientists report that they have found a flux of anti-neutrinos from Earth’s crust due to the decay of the previously mentioned radiogenic elements. Most neutrino family particles fly through our planet as if it were not there. Their interactions with matter are said to be extremely weak because they carry no electric charge. The only forces that can act on them are gravity and the weak nuclear force, although some physicists would argue that the weak force is another aspect of electromagnetism.

Anti-neutrino detection depends on computer analysis of several events that take place over breathtakingly small fractions of time. When an incoming anti-neutrino converts a proton to a neutron and a positron (an anti-electron), the first thing that happens is inverse beta decay: the positron annihilates itself, along with an electron when they come into contact. There is a brief, dim flash of light from the annihilation that is picked up by the KamLAND photomultipliers. In another hundred millionths of a second, a proton in the tons of hydrocarbon fluid inside the detector vessel captures the neutron, causing it to emit a gamma ray. It is these two delayed coincidence signals that constitute the “detection” of an anti-neutrino when they are decoded from the “noise” that interferes with the machine.

There are several factors that call into question the reliability of such practices, not the least of which are the presumptions that are made about the signals that KamLAND detects. Its primary function was to identify various neutrino “flavors” from nearby nuclear reactors. The fact that it found neutrinos in conditional states that did not agree with the standard model of quantum mechanics indicates a problem with the theory or a problem with the data. Possibly both. Of further significance, its findings do not support the conventional model of the Sun.

Perhaps what is needed is a track change away from conventional destinations and into new areas of thought: thought that takes into account Earth’s interaction with colossal electrical forces at some time in the recent past.

So-called “telluric currents” circulate through Earth’s crust because our magnetic field induces current flow in conductive strata. Hundreds of thousands of amperes stream beneath the surface, the current strength varying according to the conductivity of the strata. Since the Sun can affect Earth’s magnetic field through geomagnetic storms, fluctuations in telluric currents can occur when solar activity increases. This happens because of oscillations in the ionosphere. The slight variations that have been found are probably accounted for in this way.

When blocks of acrylic plastic are exposed to a high intensity electron beam, they accumulate a significant electric charge. After the blocks are discharged by driving a nail into their sides, the traces of feathery figures remain embedded in the plastic. The lightning-like pathways are called Lichtenberg figures. They result from electrons rushing through the acrylic toward the point of discharge. The tension caused by the current flow leaves micro-fractures behind. Interestingly, the blocks continue to exhibit flashes from internal electric discharges for several minutes.

If small plastic blocks were converted to quartz and scaled-up to the size of North America, and the electron beam were scaled up to an electric discharge of planetary dimensions, giant scars might be left behind: scars like the Grand Canyon’s Lichtenberg geography, or something as incredible as the Mid-Atlantic ridge. The remanent electromagnetic fields could also generate a great deal of thermodynamic energy.