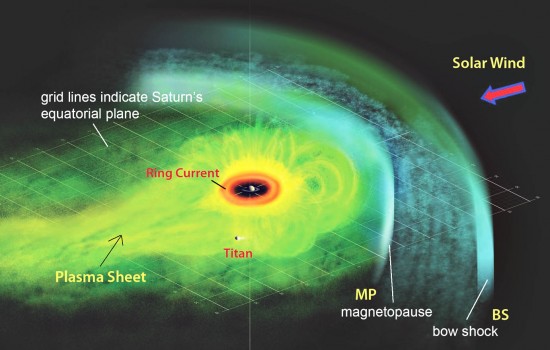 A current sheet is exactly what it says – a thin surface within which a current flows. It obviously differs from a diffuse cloud of moving charge and from a cylindrical filament of current. A current sheet forms a surface between two regions of plasma, somewhat like a Double Layer, and, also like a DL, often separates regions of different characteristics.

Obviously the direction of the current can change as the sheet itself does not need to be planar. For example, there is clear evidence of a part-spherical current sheet at the ‘bow shock’ where the Earth’s magnetosphere interacts with the incoming solar wind. 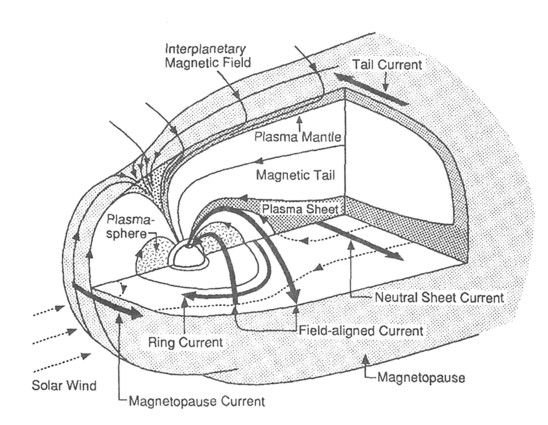 If we analyze the magnetic field near a current sheet we find that the magnetic force due to the current sheet is in opposite directions on either side of the sheet. For example, if a current is flowing up this page, then above the page the magnetic field will be from left to right, and below the page it will be from right to left, as one would expect from the rotation right-hand rule for any individual ‘thread’ of current. (Note that the rotation right hand rule is not the same as the vector cross-product right hand rule !)

Current sheets therefore are another means by which plasma can cellularize in response to differing environments.

The Lorentz Force on a charged particle, F = q(E + U × B) in vector algebra, depends on the relationship of the velocity of the particle U to the magnetic field B. The magnitude of the vector cross product U × B can be written UB sin θ, where θ is the smaller angle between U and B.  The direction of the force produced by U × B is given by the movement of a right-handed screw turned from U to B, that is, it is at right angles to both U and B.

This causes a charged particle moving at right angles to the magnetic field to follow a circular path in a plane perpendicular to the field. We can call this the centripetal force. If E is nonzero, the particle will also accelerate in the direction of E.

Obviously, if U is zero or parallel to B then there is no centripetal force on the particle from the magnetic field. In other words, if the particle is stationary or moving parallel to the field, then it will experience no magnetic force.

The particle velocity that would result from a combination of a force-induced motion and a magnetic field can be considered as a circular motion around a guiding center (image below), which center itself drifts perpendicular to the magnetic field with velocity vp given by the Guiding Center Equation:

Note that F is any nonmagnetic force (for example, gravity, or an electric field) which causes motion of a charged particle. This motion then interacts with the magnetic field according to Lorentz’s Law. When B is in the z direction and F is in the y direction in Cartesian coordinates, then the resulting velocity vp is in the x direction. 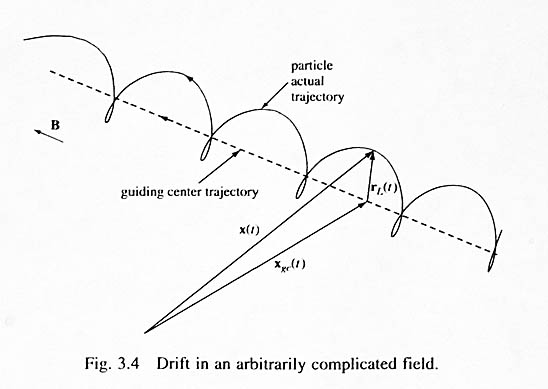 What this equation tells us is that, when a particle is subject to an external force perpendicular to the magnetic field, it will acquire a constant velocity vp perpendicular to both the field and the force. How this comes about is as follows:

If a particle is initially at rest, an external force (an electric field, say) will start to accelerate it in the direction of the force according to Newton’s laws. However, as soon as the particle acquires some small amount of velocity or velocity component perpendicular to the magnetic field, then a centripetal force emerges as a result of the magnetic field and starts to turn the path of the particle away from the trajectory induced by the external force.

As long as the particle continues to move with velocity vp in the perpendicular direction, then the situation is stable, and the external force remains balanced by the centripetal force.

The above discussion applies to any constant external force acting on a charged particle in a magnetic field. Various forces can cause velocities in the direction perpendicular to the magnetic field. These include gravity, an electric field, and inertial forces. Each will have a different effect dependent on whether the external force is a function of the mass of, or the charge on, the particle, as follows:

Case A.  Electrical Field Force, FE × B for an electric field perpendicular to B.

Because Fg = mg , the resulting perpendicular drift velocity is dependent on both the mass of the particles and their charge, and for Case B: 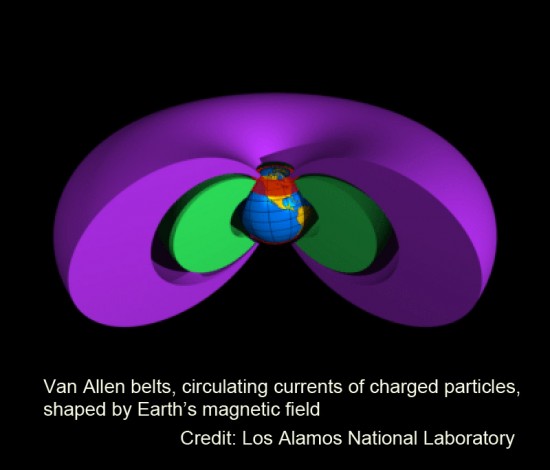 As vp is charge-dependent, the final velocity of ions and electrons is in opposite directions and therefore represents a current. Ions of different masses will acquire different final velocities and so will be chemically sorted. There is also another important effect of inertial effects:

Unless charge is flowing from an electrostatic source or to a sink, then it will form part of a closed circuit. In space, the circuit may not always be obvious because the conductors are often invisible and may close the circuit at vast distances from the areas of interest, but they must close somewhere.

Consideration of the circuits in space can explain behavior such as transport of energy from one area to another which drives detectable electrical activity in a region under investigation.

In this context, it is worth pointing out that if a plasma containing any regions of slight charge imbalance is moving relative to another region of plasma in a magnetic field, then the first region will induce an electric field and currents in the second region due to the interaction of the electromagnetic fields and forces.

The Gravity Model holds that Debye screening, which is due to similar effects as cause a Debye sheath around a charged body, limits the extent of charge imbalances to the Debye length. However, the v × B force from the Lorentz equation is independent of the Debye length and can induce an electric field in another region of plasma well beyond the Debye limit.

Any Double Layer accelerates ions and electrons due to the potential drop across the DL. If the DL is a current-carrying DL, then it effectively forms part of an electrical circuit in which the current is flowing. The energy to accelerate the particles is supplied by the circuit and converted within the DL into kinetic energy.

The DL therefore acts as an inertial resistance and may experience a reaction which causes its position to drift. This is analogous to the recoil of a gun as its power source accelerates the mass of the bullet. Particles accelerated by the DL cause a pressure on the surrounding plasma, with which they interact and cause radiation. Dissipation of excess energy in this fashion can allow the plasma to reach a stable state via the formation of a DL which provides the necessary mechanism.

The circuit energy supplied to the DL may originate in the energy stored in the magnetic field or in the kinetic energy of the bulk plasma. In circuit terms, an element which stores energy is an inductor. The plasma may therefore be thought of as analogous to an inductor in a simple circuit. Similarly, the DL behaves in some respects as a capacitor, although one with variable characteristics, including a resistance which can reduce with increasing current.

All electrical circuits which have inductance are potentially unstable, depending on the values of voltage, inductance, resistance, and capacitance around the circuit. If the total resistance of the circuit is negative, which is often the case in plasma because of the falling characteristic of the I-V (current versus voltage) curve, then stability of the inductive circuit is impossible. A simple circuit involving voltage, inductance, and negative resistance will either oscillate or dissipate all its energy and become extinct.

The behavior of plasma in a CCDL is thus dependent on the characteristics of the external circuit which is driving the formation of the CCDL.

A circuit containing inductance and capacitance has a natural or resonant frequency at which it will oscillate electrically. Similarly, a plasma circuit containing inductance in the form of stored magnetic energy and a CCDL exhibiting negative resistance will tend to have a resonant frequency at which energy is exchanged between the electric field in the DL and the magnetic field in the plasma. As the electric field in the DL increases, it will accelerate particles to higher energies in the normal manner.

It is apparent that this model is an efficient means of generating high-frequency bursts of radiation. By contrast, the Gravity Model postulates very high density neutron stars rotating up to thousands of times a second in order to explain this commonly-observed phenomenon.

Not all situations result in a resonant frequency. Variations often result in oscillations over a wide frequency band. The DL is then ‘noisy’ in electrical circuit terms. The effect of the noise is to create a range of electron energies in the beam accelerated by the DL. Some electrons then have enough energy to break out of the magnetic field confining the current, and this can lead to expansion of the plasma.