Home Picture of the Day A Mystifying Menagerie 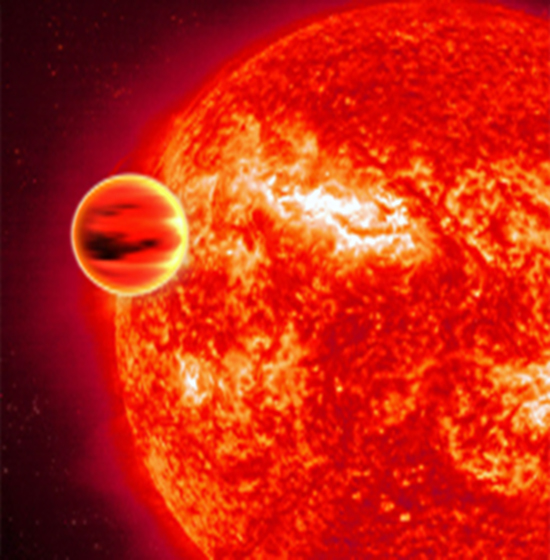 Artist's impression of an extrasolar planet with many times the mass of Jupiter. Credit: ESA/C. Carreau

A distant system of planets in proximity to one another challenges current theories.

A recent press release from the Kepler Space Telescope research team announced the discovery of an “alien solar system” with six planets. That they are so near to the newly named Kepler-11 star has caused some consternation, since they are tightly aggregated in a single orbital plane.

NASA launched Kepler on its three and a half year mission to search for planets revolving around other stars, and it has found dozens of them in a variety of sizes. Astronomers have been investigating the possibility that there are other stellar families outside of the Solar System for many years, so Kepler was built to find planets that are close to the size of Earth.

In 1756, Immanuel Kant proposed that the Solar System condensed out of a dusty cloud of gas floating in space. As the “Nebular Hypothesis” concludes, the cloud contracted because gravitational attraction between particles caused them to clump together. As each clump grew, even greater attractive force drew them all together into a mass.

The mass attained so much gravity that it compressed into a small, hot ball, rotating with the angular momentum contained in the original cloud. It attracted more and more material into its mounting gravitational field, until it finally ignited in a nuclear fusion reaction, thereby giving birth to the Sun. If the hypothesis is correct a similar, if not identical, process presumably takes place in other nebular clouds.

The hypothesis has at least one fault: it fails to explain how the planets possess about 97% of the total angular momentum in the Solar System when their combined mass is less than one-tenth of one per cent of the Sun’s mass. Some astronomers have attempted to prop up the theory by suggesting that the Sun has an undetected companion star on a long, parabolic orbit that takes it beyond our instruments.

Kepler-11’s inner five planets all revolve closer than Mercury orbits the Sun, posing a problem for the conventional explanation of planet formation. However, Electric Universe physicist Wal Thornhill argues that a different view of stellar ignition and evolution clears up the problem of planets packed in so tightly to their parent star, as well as their angular momentum.

The plasma cosmogony hypothesis suggests that stars form when cosmic Birkeland currents twist around one another, creating z-pinch regions that compress plasma into a solid. Laboratory experiments have shown that such compression zones are the most likely candidates for star formation and not collapsing nebulae, which is the eighteenth century theory to which astrophysicists still cling.

When stars are born, they are most likely under extreme electrical stress. If such is the case, they will split into one or more daughter stars, thereby equalizing their electrical potential. Thornhill writes: “The fission process is repeated in further electrical disturbances by flaring red dwarfs and gas giant planets ejecting rocky and icy planets, moons, comets, asteroids and meteorites. Planetary systems may also be acquired over time by electrical capture of independent interstellar bodies such as dim brown dwarf stars. That seems the best explanation for our ‘fruit salad’ of a solar system.”

He also argues that the longer a star lives, the more metal it will accumulate: “Intense plasma discharges at the stellar surface give rise to starshine. Those discharges synthesize ‘metals’ that continually rain into the star’s depths.” At some point, the star ejects those metallized accumulations as large, ionized gas giant-type planets. Smaller, rocky objects might also calve from the host star.

When it becomes possible to send probes to other star systems, they will most likely find planets similar to those around our own Sun. The electric forces that formed this planet most likely formed the exoplanets, so it is expected that we will find Earth-like planets eventually.