Home Picture of the Day Dust to Dust 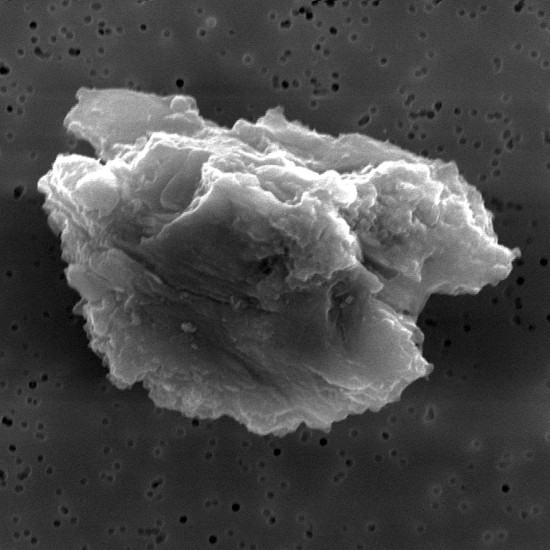 Dust in space is said to be formed because stars condense out of dusty protoplanetary nebulae. The current theory of star formation was originally proposed by Immanuel Kant and Pierre Simon Laplace in the Eighteenth Century. A nebula is said to be “star forming” when points of X-ray radiation are observed by space-born telescopes like the Chandra X-ray Observatory. X-ray emissions supposedly indicate that new thermonuclear fusion reactions have begun within a nebular cloud.

Shock waves generated by supernovae are thought to slam into star-forming regions, causing the wispy dust and gas to compress along the shock front. It is that initiator that astronomers say “jump-starts” star formation in a nebula. How shock waves travel through the incredibly rarified medium of interstellar space until they encounter a nebular cloud is not known, however.

Unlike the meteoric dust grain shown at the top of the page, free-floating nebular dust is just 0.1 microns in size, or smaller than the wavelength of blue light at 0.45 microns. According to the “cosmic dust cycle”, as some massive stars progress through their life cycles and then explode in supernovae, they are observed to blow off incredible quantities of dust.

The Herschel Space Observatory looked at the supernova remnant in 2010 with its infrared detectors, finding dust in the ring glowing at frequencies that indicated temperatures of -100 Celsius and -250 Celsius, only a few degrees above absolute zero. There is so much cold dust in the remnant that scientists estimate its mass as more than 6 × 10^30 kilograms—more than 200,000 Earths. This “dust repository” seems to conform to the theory that supernovae release most of the dust that is seen in space.

According to a recent press release, scientists at the NASA Ames Research Center in San Jose, California succeeded in creating particles of space dust. Using a device known as the Cosmic Simulation Chamber (COSmIC), researchers inject a cold spray of hydrocarbon molecules into a vacuum chamber, where they are “processed” in an electric discharge.

As Ella Sciamma-O’Brien, a researcher from the BAER Institute wrote: “During COSmIC experiments, we are able to form and detect nanoparticles on the order of 10 nm size, grains ranging from 100-500 nanometers and aggregates of grains up to 1.5 micrometers in diameter, about a tenth the width of a human hair, and observe their structure with SEM, thus sampling a large size distribution of the grains produced.”

So, supernovae are where astrophysicists think dust is created, and scientists using a supercold vacuum chamber and a powerful electric discharge are “recreating” those events. What does that mean for the Electric Universe theory?

Many Picture of the Day articles point out that stars are not the gravitationally compressed cold gas and dust that the consensus astronomical community’s 300 year old theory says they are. Rather, they are composed of plasma. Plasma is ionized: one or more electrons have been stripped from the atoms in its substance, making it electrically charged. Plasma does not behave like pressurized gas, it behaves according to the tenets of plasma physics.

In an electrically charged plasma star, explosions occur because of double layer breakdowns. A star’s power comes from external currents of electric charge flowing through vast circuits in space. Instead of “core rebound” or “white dwarf accretion,” supernovae are the result of a stellar “circuit breaker”, where the stored electromagnetic energy in the circuit is suddenly focused at one point.

When a star’s double layer explodes, the electromagnetic energy stored in its galactic circuit surges into the explosion. The resulting supernova radiation is emitted across the entire electromagnetic spectrum from radio to gamma rays. So, it is electricity that causes the stars to shine, and it is electricity that causes them to explode. If dust is formed in supernovae, it is an ironic commentary from NASA that specifies the need for an electric discharge to create their version of it.