Home Picture of the Day The Gamma-Ray Universe 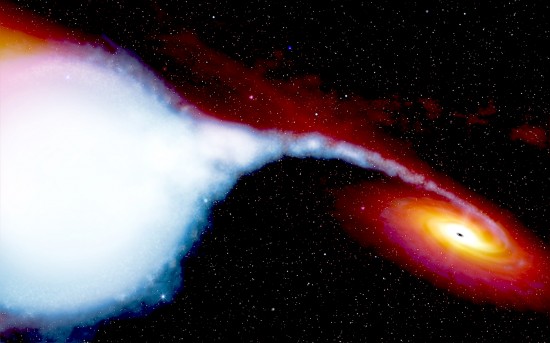 Cygnus X-1 is thought to be a stellar binary with one companion object a black hole and the other a blue supergiant known as HDE 226868: one of the strongest X-ray sources ever detected. The fact that the two objects radiate at high frequencies (also producing gamma-rays), and with great intensity, provides support for an interpretation based on Electric Universe theory.

Consensus thinking imagines a “stellar wind” from the blue supergiant star that then collects around the black hole, forming an accretion disk, where it orbits at such a high speed that it heats up to temperatures in excess of 10 million Kelvin. It is that fast, hot stellar material that is supposed to generate X-rays. The latest observation suggests that gamma-rays originate from the same matter stream.

The European Space Agency (ESA) launched the most sensitive gamma-ray observatory ever sent into space, the INTErnational Gamma-Ray Astrophysics Laboratory, on October 17, 2002. INTEGRAL’s low perigee and 153,000 kilometer apogee means that the spacecraft spends most of its time outside of Earth’s obscuring radiation belts, giving much greater resolution. INTEGRAL will remain funded until December 2016.

INTEGRAL found that Cygnus X-1 possesses another bizarre structure that is not readily explicable using black hole physics: a bipolar jet. Explaining the jets of ionized particles seen emanating from various objects in space is one of the most difficult tasks facing modern astronomy. What force creates energetic particle beams spanning light-years? What confines them into narrow filaments?

Hundreds of stellar jets have now been observed since Cygnus X-1 was first seen in 1964. The prevailing theory of black holes or neutrons stars heating gas and dust in an accretion disk does not address the existence of collimated jets. There is only one force that can hold such a structure together: electromagnetism. The only way to generate the electromagnetic fields necessary for bipolar jets is with electricity flowing through space.

The two lobes of Cygnus X-1’s radio jet represent a cone of plasma viewed from the side. It is an example of a stellar scale dense plasma focus or “plasma gun.” Surrounding the stellar binary is what should more properly be called an “expulsion disk,” rather than an accretion disk. Also, plasma arc discharges are known to generate high-energy ultraviolet light. The more electric current supplied to the arc, the higher the frequency. If enough power is supplied, X-rays and gamma-rays can be generated.

Standard cosmological theories are hard-pressed to match models with observations. X-rays from ion excitation, a range of energy curves, and gamma-rays are all properties of lightning bolts. Computer simulations demonstrate that plasma phenomena are scalable over several orders of magnitude; they behave in the same way whether in atoms or galaxies. Perhaps the gamma-rays (and X-rays) from Cygnus X-1 are really flashes of cosmic lightning coming from electrified clouds of plasma on a stellar scale.

The presence of the blue giant companion indicates that Cygnus X-1 is under great electrical stress. A typical response to such stress is for a single star to split into two unequal components, so that the discharge can be spread out over a larger surface area. The blue giant takes most of the current, radiating from the “anode tuft” arcs in its photosphere. The companion has no photosphere but radiates X-rays from a high-temperature corona.

Electricity is the force powering the stars—the more electricity that flows in to a star, the greater the effect on its output, causing powerful bursts of energy that are detected by instruments, like INTEGRAL. The stars are anodes in a galactic circuit, so the standard models for their behavior will always fail to explain observations.