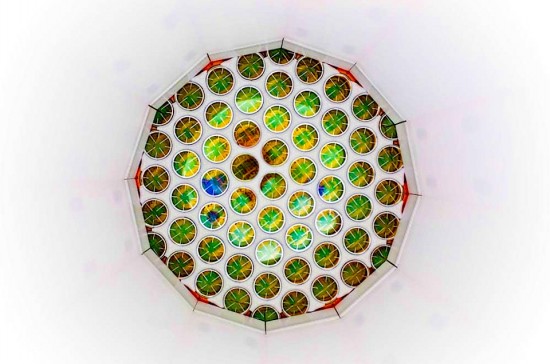 So far, no dark matter candidates have been detected.

Dark matter, as previous Picture of the Day articles report, is undetectable, except through its supposed gravitational interactions with luminous, or baryonic matter. Large, expensive experiments are currently investigating many aspects of its hidden qualities, including a search for the particle (or particles) that comprises its substance.

One such experiment is the Axion Dark Matter Experiment (ADMX). Axions are theoretical particles that are thought to be responsible for breaking what quantum physics describes as “charge-parity symmetry“. It is not the point of this article to delve into the morass of assumptions that makes up quantum mechanics. Suffice to say, axions are one of the contenders in the search for dark matter particles.

It was once thought that “cold, non-radiating matter”, such as burned-out stars, or large planets exert forces on galactic structures. These “normal” but invisible structures were called MAssive Compact Halo Objects (MACHOs). Telescopes looked for stellar occultations caused by MACHOs. However, years of investigation returned no discoveries. This led researchers to acknowledge that MACHOs are not dark matter candidates.

Weakly Interacting Massive Particle (WIMP) theory was the chief competitor with MACHO theory for several years. With the demise of the latter, scientists pinned their hopes on a subatomic particle to account for the necessary gravitational attraction they say is caused by dark matter. In 1999, the Cryogenic Dark Matter Search (CDMS) developed a detector that was supposed to “see” the sporadic impacts from WIMPs on other atomic particles. CDMS continues to operate, although it has been upgraded into the SuperCDMS

The SuperCDMS sensor is an array of germanium crystals cooled by liquid helium to a temperature close to absolute zero. When subatomic particles strike an atomic nucleus in the crystals, it is interpreted as ionization and heat. Since the atomic movement in the sensor is almost stopped, any tiny vibrations caused by a particle’s impact are seen as “hits.” The sensor continues to be handicapped by many false readings from cosmic rays and other ionized particles. After 15 years, there is nothing to suggest that WIMPs are colliding with the detector.

With the failure of one candidate and delay in finding the other, scientists are postulating a third potential dark matter particle: the axion. Axions are hypothetical particles predicted by nuclear physics, although researchers say that they might exist, but have no bearing on the “hidden mass” of the Universe.

The ADMX uses a superconducting magnet, again cooled by liquid helium. It is thought that axions should rebound off the 8 Tesla magnetic field that the device generates, initiating microwave photon emissions that can be “seen” by an antenna. Supposedly, the rate of microwaves is proportional to the axion decay rate.

ADMX is plagued by the same difficulties that hamper SuperCDMS. Since all electronic devices generate signals in many frequencies, they create noise that ADMX must filter out. Earth also possesses a magnetic field that fluctuates because of the Sun’s electromagnetic input. Temperature changes are also noisy, since heat radiates infrared photons. Despite the 4.2 Kelvin environment, tuning the detector continues to be problematic.

Another apparatus, similar in scope, and designed to find WIMPs (although that name has fallen out of favor), is the Large Underground Xenon experiment (LUX). LUX uses 368 kilograms of liquid xenon, 1.6 kilometers beneath the Black Hills of South Dakota, as its “scintillator”. LUX is similar to so-called “anti-neutrino” detectors that use underground vats of carbon tetrachloride to capture photons arising from particles interacting with the fluid. Photomultiplier tubes that are so sensitive that they can detect a single photon surround the tank of xenon in the LUX experiment.

ADMX and LUX represent the need for ever larger and more elaborate experiments, so that physicists can “find” their theories in nature. Dark matter particles are called “weakly interacting” because the weak force is influential over a distance smaller than a single nucleon (proton or electron). A dark matter particle would have to directly collide with an atomic nucleus in order to leave any signature of its passage. Since solid matter is a rather illusory concept, dark matter interactions would take place only once in uncounted trillions of trillion atomic nuclei. Thus the need for larger and larger instruments containing more and more detection materials.

“Today, physicists labour under misconceptions about the nature of matter and space; the relationship between matter, mass and gravity; the electrical nature of stars and galaxies; and the size, history and age of the universe. So when astrophysicists turn to particle physicists to solve their intractable problems and particle physicists use it as an excuse for squandering billions of dollars on futile experiments, neither party recognizes that the other discipline is in a parlous state.” — Wal Thornhill

The ADMX started up in 1995 and has since found no evidence of axions. There is a planned upgrade that will take it into 2017. As of January 2014, LUX has returned a null result.