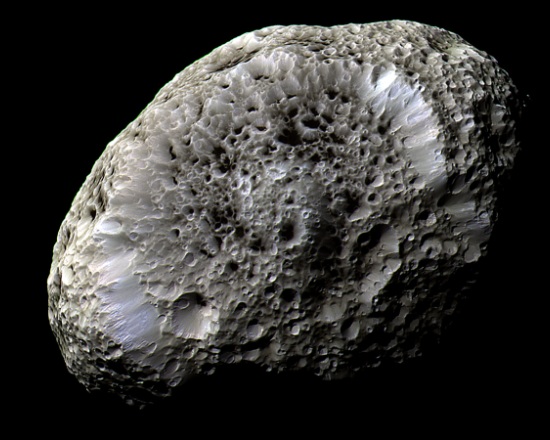 A new report from NASA’s Cassini Space Mission to Saturn may prove to be a landmark for the study of electrical phenomena in the space sciences. The article, entitled, Cassini Caught in Hyperion’s Particle Beam, describes the Cassini spacecraft being “bathed in a beam of electrons” during a close encounter with the electrically charged surface of Saturn’s moon.

The report reads, “Measurements made by several of Cassini’s instruments during a close encounter with Hyperion on September 26, 2005, indicate that something unexpected took place in the charged particle environment around the spacecraft. Among those instruments, the Cassini Plasma Spectrometer (CAPS) detected that the spacecraft was magnetically connected to the surface of Hyperion for a brief period, allowing electrons to escape from the moon toward the robotic probe.”

The report continues: “The finding is surprising, as the small but odd-looking moon was thought to be a simple inert object, which would not undergo any strong interactions with the Saturnian magnetosphere. Nevertheless, the team’s analysis indicates that Cassini remotely detected a strongly negative voltage on Hyperion. ‘It was rather like Cassini receiving a 200-volt electric shock from Hyperion, even though they were over 2,000 kilometers [1,200 miles] apart at the time,’ said [investigator Tom Nordheim].”

Electric Universe proponents have long proposed that all planets and moons in our solar system are charged bodies. The “particle beam” emitted by Hyperion, a body that NASA had assumed was a “simple inert object,” is not unique. The highly electrified environments of the gas giants Saturn and Jupiter contribute to the extraordinary phenomena on their respective moons, witnessed in the explosive electrical jets of Enceladus which planetary scientists call “geysers,” and the electric arcs that carve (and sometimes travel across) the surface of the Jovian moon Io, but which NASA scientists interpret as “volcanoes.”

Hyperion’s “surprising” electrical activity will be the subject of a forthcoming Space News episode. However, let us for a moment examine a somewhat confusing statement in the Cassini report’s opening paragraphs. Discussing the “particle beam” detected from Hyperion, the report states, “The finding represents the first confirmed detection of a charged surface on an object other than our moon, although it is predicted to occur on many different bodies, including asteroids and comets.”

An electric charge on asteroids and comets has been predicted? Until very recently electric charge has never been discussed in contemporary scientific literature as a cause of cometary displays.  But yes, a modest electric charge on asteroids and comets has been discussed, with little notice. And very recently, NASA has begun developing computer models to attempt to predict the electrical environments astronauts might face in future missions to asteroids. However, the electrical phenomena NASA envisions are limited to solar radiation and minor photoelectric surface effects with virtually no bearing on visible asteroid behavior.

It is also true that institutional science has acknowledged certain electrostatic potentials in space, but mostly for manmade objects. In the late 1960’s, when man returned from the moon, scientists were astonished at the amount of electrostatic clinging of lunar dust to spacecraft and spacesuits. Following this surprising discovery, some scientists considered similar effects on comet and asteroid surfaces. In the 1981 paper “Potentials of surfaces in space,”  author Elden C. Whipple writes: “surfaces which are shielded from sunlight and from solar-wind ions such as the dark sides of the Moon, asteroids or comets may attain large negative potentials as was mentioned in 54.2  (e.g. Knott 1973, Parker 1978).”

Also in 1981, in the paper, “On the Electrostatic Charging of the Cometary Nucleus,” the authors write, “It is shown that beyond a heliocentric distance of about 5 AU, a water-dominated cometary nucleus is not shielded from either solar UV radiation or the solar wind by a protective atmosphere. As a result the nuclear surface gets electrically charged, the surface electric potential varying from small positive values near the subsolar point through numerically moderately large negative values near the terminator to numerically very large values on the dark side. The dark side potential is also strongly modulated by the local solar wind speed.” The authors also suggest that “dust particles can be electrostatically levitated and also be totally blown off the cometary surface.”

Electrostatic levitation of dust has also been proposed for asteroids, again theoretically due to direct surface exposure to solar radiation and the solar wind.

What must be made clear in this regard are the fundamental differences between the Electric Universe predictions for electrically charged comets and asteroids, and the rare suggestions of electrostatic effects on these bodies that have appeared in mainstream scientific literature. Cassini investigators stumbled into an electric current from an object they had assumed was “simple” and “inert”, and were unprepared for the shock. Would the moon’s particle beam have so startled them if they had been well-trained in experimental plasma physics and electrical engineering?

The Electric Universe recognizes Alfvén’s electric circuit of the Sun, which requires a vast, weak electric field centered on the Sun. Such an electric field is required to explain the still-mysterious solar wind acceleration and coronal heating. All bodies within the Sun’s field are electrically charged. As the very recent NASA report on “electric asteroids” admits, “Space may appear empty — a soundless vacuum, but it’s not an absolute void. It flows with electric activity that is not visible to our eyes.” It is plasma that is the conductive medium through which electric currents flow and generate the observed magnetic fields in space.

To witness the depth of institutional science’s failure to integrate electrical and plasma science into its theoretical models and educational system, let us go back to 2005, leading up to NASA’s Deep Impact mission to the comet Tempel 1. As early as 2001, on his website Wal Thornhill published the following prediction: “The electrical model suggests the likelihood of an electrical discharge between the comet nucleus and the copper projectile…the projectile will approach too quickly for a slow electrical discharge to occur. The energetic effects of the encounter should exceed that of a simple physical impact….”

This prediction, as well as many others published by Thornhill and the Thunderbolts Project, received stunning confirmation. These predictions were easily distinguished from those of conventional comet theory.

Shortly after the event, an investigative journalist named David McCandless began working on a piece he would publish with the website Wired.com, entitled, They Sing the Comet Electric. McCandless outlined Thornhill’s successful predictions for the Deep Impact mission. McCandless sought an official comment from NASA spokespersons. However, NASA declined.

Instead, McCandless published a rebuttal statement from Dr. David Hughes, a professor of astrophysics at Britain’s University of Sheffield. On the electric comet theory, Hughes is quoted as stating, “It’s complete cobblers. Absolute balderdash….Electricity on the surface of a comet? Forget about it. It’s not a contender.”

In subsequent years, NASA has never publicly entertained that the advance electrical flash witnessed at Tempel 1 was due to a preexisting electrical charge on the comet surface. Rather, NASA hypothesized that the impactor must have hit a shell (or icy exterior) and buried itself in softer material, causing an unexpectedly dazzling outburst to follow. However, more recently NASA has stated that the comet is “more porous than previously thought and not armored with an icy exterior or shell.” Yet still, there is no discussion of the comet having an electric charge. An advance electrical flash was perhaps the easiest prediction one could make when recognizing a comet’s electrical environment. See the related video, “The Electric Comet—‘Water’ from Deep Impact.”

In recent years, much of comet science has seemed intractable in the face of baffling comet and asteroid discoveries, primarily because respected authorities have yet to entertain the electrical nature of these bodies. As University of Maryland senior research scientist Tony Farnham recently stated, “Comets are complex beasts and don’t always live up to our predictions….If you don’t want surprises, then don’t study comets.”

Consider the case of P2013-P5, an asteroid which was recently reclassified as a main belt comet. The former asteroid astonished scientists around the world when it suddenly displayed six comet-like tails. How do astronomers explain a rocky asteroid growing and maintaining highly collimated jets of material, forming the comet tails? An ad hoc theory arose, to the effect that the former asteroid suddenly began spinning faster, for some reason – possibly because “pressure from sunlight…exerted a torque on the body.” This change in the former asteroid’s spin rate may have caused material to “avalanche downslope towards the equator, and maybe shatter and fall off, eventually drifting into space to make a tail.” It is then suggested that radiation pressure somehow stretched and confined the dust into the comet tails. 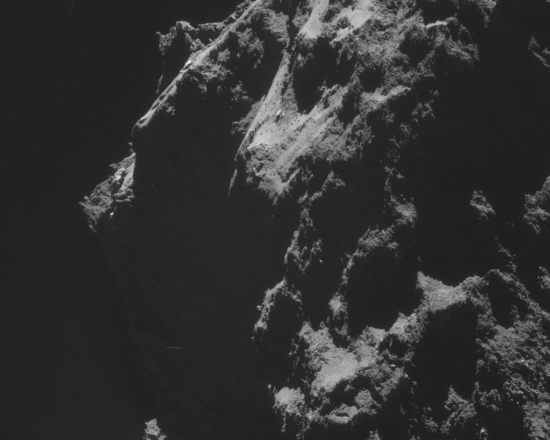 Comet 67P/C-G on 18 October, from a distance of 9.8 km from the center of the comet. Image Credit: ESA/Rosetta/NAVCAM

With the world’s attention focused on the Rosetta mission to comet 67P, the failures of popular comet theory have never been more evident. On November 12, the ESA will attempt to use harpoons and ice screws to secure a lander on the comet’s blacker than charcoal, rocky and ice-free surface. Only the Electric Universe predicted that the comet nucleus would not be a dirty snowball or an icy fluff ball, but rather scorched material excavated electrically from a planetary surface. (An important note: contrary to some popular discussions, the Electric Universe theory does not state that all comets are “solid rocks.” We have noted the evidence for electrical scarring on all solid bodies in the solar system, and since these bodies are composed of various materials, including water and ice, we have never excluded water being found on cometary nuclei.

However, we have always predicted little or no water or water-ice on comet surfaces – a “radical” prediction visually confirmed in Rosetta’s high-resolution images of 67P. Also, it seems likely that many comets, asteroids and meteors were machined from the surface of Mars, given the millions of cubic tons of material removed from its surface in the catastrophic events recorded in pre-history. The acid test may come from the Philae Lander’s attempt to secure itself to the surface of comet 67P by means of harpoons. The harpoons have been tested to work in loose, grainy material with bulk density around 0.5 grams per cubic centimeter. Rock is not loose or grainy and has a bulk density on average about 5 times greater (2.5g/cc3). So unless there is a substantial loose soil cover at the touchdown point the harpoons could prove a hazard.)

Of course, it is encouraging to see NASA scientists beginning to entertain a new idea – the possibility that planets, moons, comets and asteroids are electrically charged bodies. However, in truth they continue to view these bodies through the lens of Newtonian physics and inappropriate electrostatic concepts. As space technologies provide ever greater confirmation of the Electric Universe paradigm, will the established space sciences have the courage to offer a historically accurate narrative, one that credits the groundbreaking contributions of the electrical and plasma pioneers?

We encourage readers to also consider the 2011 paper of Russian scientist S. Ibadov, “Space Observations of Comets During Solar Flares.” While the paper does not include the Electric Universe concept of electric circuits in space, it does describe a capacitor-like breakdown occurring between a comet’s charged subsurface and a differently charged surface due to arriving protons from the Sun. Ibadov writes, “An irradiation of a certain class of comet nuclei having positive brightness correlation with solar activity by intense solar cosmic rays, fluxes of high energy protons and positive ions, ejected from the Sun during strong solar flares can possibly produce impulse gamma/hard X-rays due to high-voltage electric discharge in the subsurface layer of the comet.”