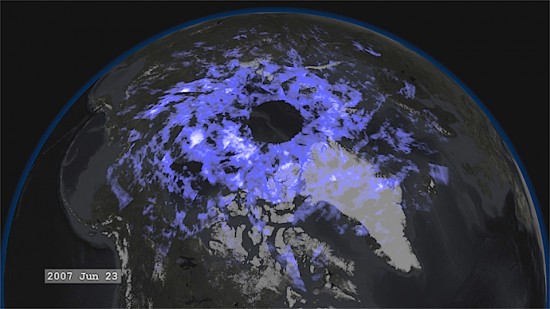 Could noctilucent clouds be part of Earth’s auroral phenomena?

On April 25, 2007 NASA launched the Aeronomy of Ice in the Mesosphere (AIM) spacecraft on a multi-year mission to study the highest visible clouds, otherwise known as polar mesospheric clouds, or noctilucent clouds. Although AIM’s primary mission was scheduled to last only two years, it has been extended twice, so far, and will continue to investigate Earth’s polar latitudes until August 2015.

Noctilucent clouds (NLC) (“night-shining” clouds), can be found high in Earth’s atmosphere, at altitudes of 76,000 to 85,000 meters. This region is called the mesosphere, between the stratosphere and the thermosphere, at an altitude between 50 and 85 kilometers. The mesosphere is where most incoming space debris burns up, as well as where red sprites and blue jets are found. It appears to be an electrically active part of Earth’s environment, but it is also an extremely cold atmospheric zone, with temperatures of minus 90 Celsius.

According to a recent press release, AIM mission specialists announced that noctilucent clouds could be “teleconnecting” Earth’s polar regions. One of the AIM team, James Russell, Hampton University professor of atmospheric and planetary science, reported: “It has been a surprise. Years ago when we were planning the AIM mission, our attention was focused on a narrow layer of the atmosphere where NLCs form. Now we are finding out this layer manifests evidence of long-distance connections in the atmosphere far from the NLCs themselves.”

Another AIM team member, Cora Randall, also the Chair of the Department of Atmospheric and Oceanic Sciences at the University of Colorado, said: “When northern stratospheric winds slow down, a ripple effect around the globe causes the southern mesosphere to become warmer and drier, leading to fewer NLCs. When northern winds pick up again, the southern mesosphere becomes colder and wetter, and the NLCs return.”

It is this “ripple effect” that is supposed to provide the “mysterious” communication between north and south, with one influencing the other over a span of two weeks. Of course, since atmospheric scientists are not concerned with the electric Earth, except in the broadest sense, the connections are seen as kinetic influences. Winds and circulation are invoked as their tentative explanations. For instance, in January 2014, AIM found an “unexpected decline” in NLCs above Antarctica. In the previous two weeks, Arctic stratospheric winds and a “distorted polar vortex” were observed. Could this connection have been electrical in origin?

Many Picture of the Day article argue for a connection between the Sun and Earth’s weather. It is probably no coincidence that a coronal mass ejection (CME), accompanied by a massive X1.2-class solar flare, blasted out from the Sun on January 7-8, 2014, initiating bright aurorae at both poles.

As written elsewhere, there is an electromagnetic magnetotail (or plasma tail) extending millions of kilometers away from Earth, pointing away from the Sun. Charged particles ejected from the Sun, called the solar wind, are captured by Earth’s magnetosphere in a plasma sheet within the magnetotail. Electromagnetic instabilities occur when bright aurorae are visible. In 1903, Kristian Birkeland discovered that electric charge from the Aurora Borealis flowed parallel to the auroral formation. Birkeland’s polar electric currents are known today as auroral electrojets, connected to electric circuits following Earth’s geomagnetic field into and away from the Arctic and Antarctic regions.

In the image at the top of the page, it appears as if NLCs follow the configuration of Earth’s auroral ovals. They surround the poles but do not venture into an area directly above them. NLCs also appear to follow the ebb and flow of aurorae as they descend into lower latitudes in response to the Sun’s increased activity: more CMEs means aurorae are more likely to be seen closer to the equator.

NLCs are thought to be normal clouds, except that they are composed of ice crystals that form on so-called “meteor smoke”, or the microscopic ash left behind by meteors that burn-up in the mesosphere. However, one major characteristic is their filamentary structure, with obvious long tendrils. Another aspect of NLCs that is largely ignored is that they exhibit “high radar reflectivity” over a wide range: from 50 megahertz to 1.3 gigahertz.

Could NLCs be a “weak” auroral phenomenon, and not merely ice crystals that shine because they are so high that the Sun reflects off them from below the horizon? Perhaps AIM’s continuing mission will provide additional clues.