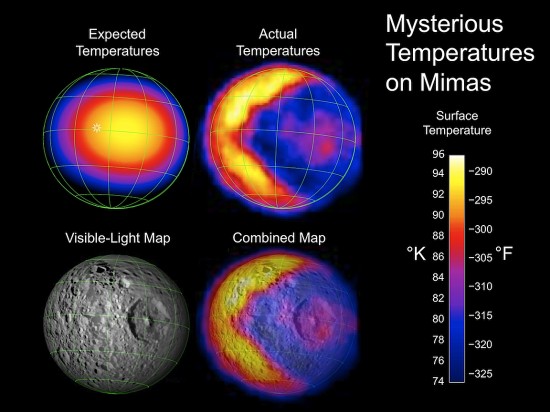 An infrared map of Mimas by the Cassini spacecraft on February 13, 2010. Credit: NASA/JPL/Goddard/SWRI/SSI

In past Picture of the Day articles, several moons in the Solar System were analyzed in terms of their electrical connection with their parent bodies. In particular, the discovery that Jupiter’s moon Io and Saturn’s moon Enceladus are exchanging powerful flows of electric charge with their gas giant hosts suggests that electricity plays a larger role in planetary dynamics than conventional astrophysics acknowledges. Instead, the scientific community prefers gravity in the form of “tidal force” as their sine qua non.

Mimas is only 397 kilometers in diameter, one of the smaller moons in the Solar System. It compares in size to both Enceladus and to one of Neptune’s moons, Proteus. It possesses a giant crater that dominates one of its hemispheres: about one-eighth the diameter of the entire moon. A similar scale crater on Earth would cover almost half of the Pacific basin.

Herschel crater, named for Sir William Herschel who discovered Mimas in 1789, is 130 kilometers wide with a towering central peak. Such craters are theorized to form from asteroid impacts. However, there is little debris within the crater and not many boulders or other fragments surround it. Researchers think that one reason for the lack of debris is that Mimas has little gravitational attraction, so the blast remnants did not remain nearby. It sounds like a plausible explanation, except that the craters on large planets like Earth and Mars—some many hundreds of kilometers wide—also demonstrate little eruptive fallback; their floors and sidewalls are swept clean, though some glassified breccia is often incorporated into them.

The strangest aspect to the crater is its hexagonal shape. How can an asteroid explosion cause a hexagonal crater? No high velocity gun experiments have demonstrated a polygonal crater after an explosive event. Impact events do not result in such formations. Instead, they are chaotic and leave behind circular depressions with conical bottoms.

Mimas is also extremely cold. Infrared measurements by the Cassini spacecraft reveal it to range from -146 Celsius to -160 Celsius. The strange pattern of cold is confusing to NASA mission team members. They expected that Mimas would be warmer where the Sun’s energy shines straight down. However, the infrared map generated by Cassini indicates that the warmest temperature is along the western limb.

Other false-color images seem to suggest that the temperature differences correspond to surface composition, but no one is sure why. It is thought that the ice grains on Mimas vary in size, causing them to change the way they reflect light.

Recently, the moon Mimas made the news again because of its unusual orbital oscillation. Could the temperature and oscillation anomalies be related?

Electric Universe advocates suggest that plasma discharges on Saturn’s moons, including lightning bolts, diffuse glow-mode clouds of energetic particles, and rotating Birkeland currents could be the agents for the bizarre conditions found there. For instance, Mimas has collected a coating of some compounds that were eroded from the other moons in the Saturnian system, especially Phoebe. Perhaps the splotches of dark red and sooty black coloring the faces of Rhea, Tethys, Iapetus, and Mimas are made of ultra fine dust electrically etched from Phoebe.

Mimas might have once been caught in the grip of an interplanetary particle beam that excavated Herschel crater and the other geological features incised on its face. Due to the plasma instabilities in the discharge, a hexagon was cut deeply into its crust. When the electrical energy was withdrawn, Herschel crater remained, a “fossilized” geometric shape permanently burned in.

The electric currents that cut the craters and rilles on Mimas most likely left evidence of their passages in other ways. The anomalous temperature measurement that cannot be attributed to the Sun’s influence is probably one sign of those past catastrophes. It may be that the unusual V-shaped pattern in the false color images from Cassini is a warmer layer of dust and ice that was excavated from Herschel crater and ionically deposited “downwind” by a high-energy plasma discharge in the recent past.

Along with those phenomena, the orbital libration could be caused by the forces that gave birth to Mimas in the first place. It is a well-known fact of electrical theory that transient responses to charge flow can cause oscillations. Such oscillations result from a sudden rise in voltage and another oscillation from a sudden drop in voltage. Since Mimas is most likely connected to Saturn by so-called “electromagnetic flux ropes”, as it revolves, that connection could create the moon’s “wobble” due to changes in the electricity flowing between the two bodies.