Home Picture of the Day Currents of Thought 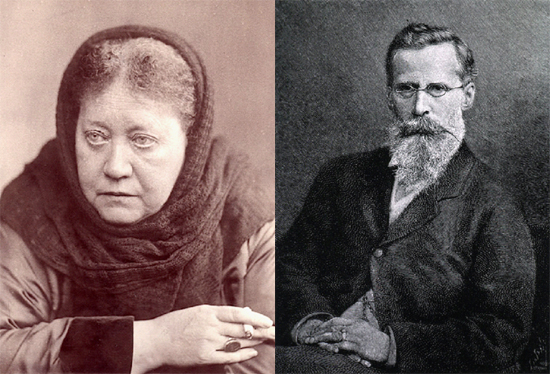 Did Helena Blavatsky and Sir William Crookes inadvertently help to discredit early theories of electromagnetism in the cosmos?

Long before the Space Age, theories of a fourth, ‘radiant’ state of matter and electromagnetic explanations of the polar aurora, the zodiacal light, comets, the sun and indeed the entire universe circulated widely and were openly discussed. When space probes began to relay in situ measurements, the electrical nature of the aurora, as argued by Kristian Birkeland and a host of others, was vindicated definitively. Yet curiously, the intellectual forerunners of plasma-universe theory, with its emphasis on the predominance of the electromagnetic force across many orders of magnitude, met with a very different fate.

Many early speculations concerning electrical aspects of the zodiacal light, comets, planets and stars were never falsified, but became anathema to the astronomical and astrophysical mainstream in the period between 1890 and 1915. At that time, discussion of electromagnetism in space, outside the earth’s magnetosphere, became practically verboten – a taboo that is only now beginning to disintegrate, following a century of Dark Age myopia and limited progress in astronomical theory. Which psychosocial factors were responsible for the stigma? A definitive answer to this question is not yet available, but five likely factors can be proposed.

Firstly, the demise of late 19th-century investigations of electromagnetism in space was likely expedited by their ingrained association with the paranormal. Fin-de-siècle equivalents of gullible and uncritical ‘New Age’ thinking were rife and may have spoiled the field for serious investigators. The rampant popular belief in ‘animal magnetism’, ‘vital fluids’, and ectoplasm, as well as the fantasies bandied about in the theosophical oeuvre of the Russian occultist Helena Petrovna Blavatsky (1831-1891), published between 1877 and 1892, may have prompted a similar visceral repulsion to the one modern scientists experience upon exposure to New Age writings about healing ‘vibrations’, ‘energies’ and the supposed operation of quantum effects. Blavatsky’s advocacy of a universe governed by electromagnetism, not gravity, may well have been detrimental to the cause, simply because of the fanciness of her other work. And that the great English electrical experimentalist Sir William Crookes (1832-1919) was much involved in spiritualism and séances, subscribing to the Theosophical Society and serving as a president of the Society for Psychical Research during the 1890s and of the Ghost Club from 1907 to 1912, may inadvertently have had a dilatory effect on the study of “radiant matter” and the solution he expected it to promise of “the greatest scientific problems of the future”. Ditto for his compatriot Sir Oliver Joseph Lodge (1851-1940), who dedicated much of his career to the study of electromagnetism, but studied the afterlife and psychical phenomena just as ardently, likewise joining the Ghost Club and serving as a president of the Society for Psychical Research from 1901 to 1903 and again in 1932. Passing no judgment on the pursuit of spirituality itself, one suspects that the manner in which it was sometimes conducted or burgeoning materialistic prejudice may have sufficed for some to condemn it altogether – discrediting speculative electromagnetical theories en passant.

Secondly, the rise of quantum mechanics during the early 20th century, involving household names such as Max Planck, Niels Bohr, Werner Heisenberg and Albert Einstein, may have diverted attention away from electromagnetic studies. The attention span of scientists being finite, perhaps the more traditional subjects of electricity and magnetism simply lost their appeal when quantum physics entered the scene – especially after Einstein made his entrée.

Thirdly, the 19th century saw a resurgence of uniformitarian thought in geology, biology and palaeontology, producing secondary ripples in astronomy and anthropology. Whereas gravity naturally acts as a stable, highly predictable force, the almost unfathomable complexity of plasma behaviour is better accommodated on a catastrophist mindset. Natural philosophers who are happy to speculate on cometary impacts, changes in planetary orbits or punctuated equilibria in evolution will be more adequately prepared for the non-linear, chaotic regime that is so common in energetic plasmas or the volatility of coronal mass ejections, planetary magnetotails, comets and stellar flares. For those who believed that natura non facit saltus, the seeming capriciousness intrinsic to electromagnetic systems – hard to tame with mathematics – may have been a hard pill to swallow, best buried swiftly under a fossil-free sediment of dogmatic orthodoxy.

Fourthly, whereas the electromagnetic theories of Birkeland’s day were ensconced in an empirical foundation of practical observation and experimentation, the 19th century gradually ushered in a marked preference for theory over practice, for mathematical calculations over direct observations. This development may have been an inexorable accompaniment of the revival of uniformitarianism, with which it shares an aversion to rare extreme events which are hard to locate in observational records, replicate or model mathematically. The seeds for the shift may have been sown in 1838, when the German mathematician and physicist Johann Carl Friedrich Gauß (1777-1855) mathematically modelled the earth’s magnetic field by means of spherical harmonics but, in the words of science-historian Gillian Turner, “seemed curiously uninterested” in “what actually caused this magnetism”:

“Being at heart a mathematician, he was motivated more by the analytical description offered by the new mathematical methods than by the need for a physical explanation of the phenomenon. … Curiously, nearly twenty years after Ørsted’s discovery that a magnetic field could be the result of an electric current, Gauss stuck steadfastly to the idea of permanent magnetism.”

A similar attitude showed in 1860, when the vacant directorship of Cambridge Observatory was not given to Richard Carrington (1826-1875), a talented and experienced observer, but to John Couch Adams (1819-1892), who solved astronomical problems using mathematics only. This love of unfettered mathematical derivation, ins Blaue hinein, has characterised astrophysics ever since. In 1892, the Scottish mathematical physicist Lord Kelvin (1824-1907) – the same who in 1900 overweeningly announced that “There is nothing new to be discovered in physics now” – rejected Carrington’s evidence for a relation between sunspots and aurorae on the slender basis of mathematics. And the English mathematician and geophysicist Sydney Chapman (1888-1970) famously refused to observe Alfvén’s replication of Birkeland’s terrella experiment when he was given the opportunity to do so. As Alfvén reflected:

“… he flatly refused to go down into the basement and see it … It was beneath his dignity as a mathematician to look at a piece of laboratory apparatus!”

“The scientists of today think deeply instead of clearly. One must be sane to think clearly, but one can think deeply and be quite insane. Today’s scientists have substituted mathematics for experiments, and they wander off through equation after equation, and eventually build a structure which has no relation to reality.”

Finally, the tendency to rate models higher than data may have been reinforced by the massive effect of the devastating First World War (1914-1918) on collective psychology. In its most general form, this effect entailed a retreat from accurate and detailed observation of reality, often whimsical, into the relative safety of abstraction and distortion. In art, this trend is seen in such movements as modernism, expressionism, Dadaism, surrealism, futurism, cubism and Bauhaus, continued after the Second World War (1939-1945) by the likes of pop art, minimalism, and abstract expressionalism – all of which shared an aggressive contempt for naturalistic painting, sculpture or writing. While the wars’ influence on art is widely discussed and recognised, perhaps the trauma affected science similarly – encouraging an escape from testable facts, coupled with an embrace of the magical, unthreatening world of numbers and unobservable entities, a world in which regularity, predictability and uniformity could be postulated with impunity and any form of large-scale destruction simply denied. Thus, the great military conflicts of the 20th century seem to have further motivated a retreat away from factual observation into unfettered abstraction and mathematics among scientists and artists alike.

It was this neurotic mindset of a uniformitarian, gravitational, mathematical and non-spiritual cosmology, paralysing the sciences as well as the humanities, that was confronted in the 1950s by a Jewish-Russian maverick scholar who fell foul of the entire academic community, remained a persona non grata for the remainder of his life and continues to be reviled whenever his name is uttered within the halls of academia. Perhaps the time has come to revisit the potential of electromagnetic cosmologies – and transform it into current thought.