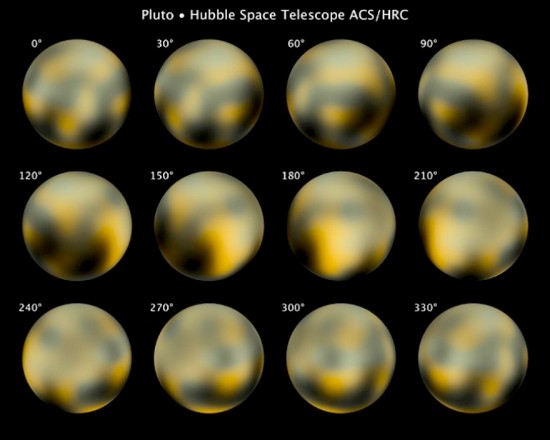 The New Horizons spacecraft is now about a year from a Pluto/Charon flyby.

On July 14, 2015 astronomers will be treated to something that has never been seen, the surface of Pluto. Once classified as the ninth planet in the Solar System until 2006, when a vote from the International Astronomical Union determined that it more closely resembled other objects called “dwarf planets”. Dwarf planets are considered to be a unique category: there are most likely hundreds of them in orbit beyond Pluto. The largest include such bodies as Ceres, Pluto, Charon (Pluto’s largest moon), Makemake, Varuna, Haumea, Quaoar, Orcus, Sedna, Eris, Snow White, Ixion, and Hyua. Many more are not named but are identified by number.

The image at the top of the page is not a photograph. It was constructed from information collected by the Hubble Space Telescope. Hubble’s images were only a few pixels in size, so special algorithms were written and then run on parallel computing engines in order to extract the picture. It remains to be seen whether the program was correct in its estimation of Pluto’s surface variations.

Pluto’s mean distance from the Sun varies because it is in a highly eccentric orbit. Aphelion takes it out as far as 7.3 billion kilometers, while perihelion brings it no closer to the Sun than 4.4 billion kilometers, which means it takes about 248 years for it to complete one revolution, longer than telescopes have been able to observe it. To put the figure in perspective, the last time Pluto was in the same place in its orbit as it is now was ten years before the signing of the Declaration of Independence.

Pluto has several moons: Charon is the largest, followed by Styx, Kerberos, Hydra, and Nix. There might be others too dim to see, so New Horizons could add to the count of 178 moons in the Solar System (a fourteenth moon around Neptune was discovered in 2013). Pluto is small, only about a third the mass of the Moon. It is thought to be similar in composition to most remote bodies, like Triton, composed primarily of rock and ice. No one is sure, at this point, what its chemical makeup really is. Hopefully, the The New Horizons instrument named Ralph, “a visible/near infrared multi-spectral imager and a short wavelength infrared spectral imager” will provide clues as the spacecraft flies by Pluto at a distance of 10,000 kilometers, at a speed of 11 kilometers per second.

After its six month encounter period with Pluto, New Horizons will head out into the Kuiper Belt, where at least three other dwarf planets will be targeted. That mission will last from early 2016 until at least the year 2020. It will be so far away from Earth at that point that transmissions will require nearly 12 hours of travel time to be received. No one is sure what to expect, but Electric Universe proponents are confident that there will be confirmation of the theory, just as every other mission to the planets and moons has done.