Home Picture of the Day I’m Singeing in the Rain

I’m Singeing in the Rain 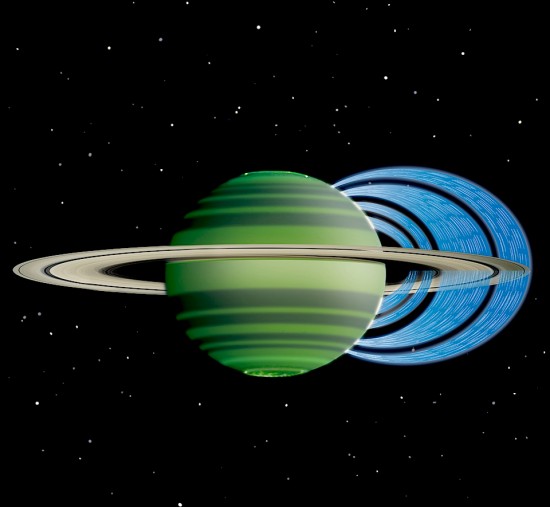 Saturn’s plasmasphere is an electrical environment, causing everything from dark-mode plasma discharges to lightning bolts that flash across the ring plane. When Cassini entered orbit around the giant planet, mission specialists were shocked to discover lightning of immense power, up to a million times more powerful than anything on Earth.

Since Saturn emits almost three times more energy than it receives from the Sun, it stands to reason that it is powered by another source. Previous Picture of the Day articles report that Saturn’s south pole is hotter than can be explained by the relatively dim sunlight that it receives. The mechanical view of the south polar anomaly fails to explain the increased temperature there, so Electric Universe proponents suggest that the “other source” for Saturn’s energy is electricity.

A NASA press release from 2013 announced that there is a “rain” of charged water molecules falling out of Saturn’s ring plane into its upper atmosphere. According to James O’Donoghue from England’s University of Leicester: “Saturn is the first planet to show significant interaction between its atmosphere and ring system. The main effect of ring rain is that it acts to ‘quench’ the ionosphere of Saturn. In other words, this rain severely reduces the electron densities in regions in which it falls.”

It is true that Saturn’s rings are composed of water ice chunks, ranging in size from a few tenths of a millimeter to the size of a small house. However, there is also a dusty component that contributes to the overall ionization of the ring structure.

From the Pioneer and Voyager space probes, to the current Cassini mission, strange, unexplained phenomena have been observed: spokes “hovering” above the rings, wheeling around the planet; so-called “propellors”; and ridges perpendicular to the ring plane, rising up as high as four kilometers. Since the rings had been long thought to be about twenty meters thick, anomalous meta-stable shapes of such dimension were a complete surprise to the Cassini team.

Another unusual finding is the discovery of “hot particles” surrounding the planet in a toroid, or doughnut-shape. It is peculiar because it is not symmetrical. A similar torus of particles surrounds Earth with electrons moving eastward and positive ions moving to the west. These charged particles are, in reality, plasma, and the motion around the Earth constitutes a flow of electric charges. The doughnut of plasma around Saturn is the same effect. The distortion of the torus on the sunward side indicates that an electrical (not mechanical) effect is occurring between Saturn and the Sun.

As mentioned, the water raining out of Saturn’s rings is charged. As such, it influences the planet’s electromagnetic fields. The electron density in the high and low latitudes of Saturn’s ionosphere is lower than expected, so the logical conclusion is positive charges are partially neutralizing the negative charges in those atmospheric bands.

In 2005, data from Cassini’s Ion and Neutral Mass Spectrometer (INMS) and the Cassini Plasma Spectrometer (CAPS) instrument, revealed that there is an “atmosphere” of molecular oxygen surrounding Saturn’s rings. The oxygen is ionized, although mission specialists suggested that “ion neutral” low temperature chemistry and “photodissociation” account for its presence. However, the positively ionized oxygen molecules seem to be at least partially responsible for the electron depletion in Saturn’s ionosphere.

It has been written elsewhere that 90 megawatts of X-rays are radiating from Saturn and its rings. Planets with magnetic fields can capture ionized particles, forming a giant electrified magnetospheres. No matter how the idea is stretched and manipulated, no mechanical effect can account for that high frequency radiation. Similarly, no mechanical rain of water can “quench” charges in Saturn’s ionosphere.

Time and again, astrophysicists refer to obvious electrical effects using kinetic terminology, or thermodynamic descriptions. The electric Sun is what drives energetic phenomena on Saturn (and the other planets). Electrical circuits power the Sun and initiate the “anomalous heating” that has been found on Saturn, as well as on the other gas planets that have been examined. It is electric charge redistribution from the rings to the oppositely charged ionosphere of Saturn that is causing what astronomers see.